New technologies can now be used to fabricate old ones. With rapid prototyping techniques, a nineteenth-century mechanism can be downloaded from an online library, translated into code, fed to a 3-D printer, and used to repair a watch, all in about an hour. While such 3-D fabrication techniques tend to fetishize objects, this talk proposes an alternative: “prototyping the past,” or remaking technologies that no longer function, no longer exist, or may have only existed as fictions, illustrations, or one-offs. Conceptually, prototyping the past explains why technologies matter by approaching them as representations and agents of history. Practically, it creates media that function simultaneously as evidence and arguments for interpreting the past. Yet most important, it does more than re-contextualize media history in the present. It integrates that history into the trajectories of design practice.

This full circuit through digital and analog manufacturing corresponds rather provocatively with a “materialist turn” in media studies, where, since at least the late 1990s, scholars have stressed the importance of media as physical entities that resist or diffract interpretations as often as they facilitate them. 1 Writing about phonography, Lisa Gitelman asserts, “At certain levels, media are very influential, and their material properties do (literally and figuratively) matter, determining some of the local conditions of communications amid the broader circulations that at once express and constitute social relations” (2006, p. 10). Somewhere between technological determinism 2 and social constructivism, 3 this assertion accounts for how—as both representations and agents of history—media play an active role in reproducing the past. Following Gitelman, in the following paragraphs I situate media history in rapid prototyping research, looking specifically at the effects of fabricating tactile models to “prototype the past.” While instrumental uses of rapid prototyping tend to fetishize objects, encourage commodification, foster nostalgia, or ignore the political dimensions of material culture, I argue that rapid prototyping can help researchers demonstrate how social and cultural complexity is intricately entangled with the historical particulars of design. 4 Ultimately, what distinguishes rapid prototyping from most other approaches to media history is its investment in not only translating between 2-D and 3-D modes of trial-and-error production but also communicating across a spectrum of media that operate simultaneously as evidence and arguments for future work. Put simply, prototyping the past is more than re-contextualizing media history in the present. It is an opportunity to meaningfully integrate that history into the social, cultural, and ethical trajectories of design practice.

More common in engineering and architecture than the humanities, rapid prototyping entails producing materials through a combination of computer numerical control (CNC) machines—such as 3-D printers (additive manufacturing) and routers (subtractive manufacturing)—with manual approaches to wood, paper, clay, etc. The aim is to subject a 3-D model to repeated feedback throughout the development process. In this sense, the design cycles are small, not grand. Also, the models are versioned. Instead of working toward a single model, multiple models are maintained throughout production. This approach is steeped in “design-in-use,” which privileges situated activity over some ideal model or user (Botero, 2013). Through design-in-use, a prototype is treated like a congealed dialogue between interested groups.

With the above in mind, this talk explains why scholars of media history may wish to prototype the past. It builds on especiwork by Kraus (2009), Balsamo (2011), Ratto (2011), Buechley (2012), Perner-Wilson (2012), Ames (2014), Hjorth (2014), Jungnickel (2014), and Rosner (2014)., and It also they in part corresponds with arguments published in “New Old Things” (2012), by Elliott, MacDougall, and Turkel. There, Elliott et al. argue that “matter [is] a new medium for historical research. Working with actual, physical stuff offers the historian new opportunities to explore the interactions of people and things” (2012, p. 122). Also, rapid prototyping may frame prototypes may be understood as situations for interpretation, without creating exact reproductions of historical artefacts (127). By extension, using matter as a medium for historical research need notneed not fetishize the past. Instead, itt becomes a time and space to interpret the material intricacies of technological design, both now and then.

Perhaps most important, prototyping the past allows scholars to remake technologies that no longer function, no longer exist, or may have only existed as illustrations, fictions, patents, or—fittingly enough—prototypes. TheseOne appeal of prototyping the past is that remade technologiesremade technologies may be circulated as tangible reminders of what was forgotten or destroyed. Yet prototyping the past also affords critiques of what is ready to hand. That is, it refuses to take historical materials at face value. Through trial and error, it tests the plausibility of historical claims. After all, what is depicted in a text may contain redactions, deliberate omissions, purposeful obfuscations, or accidental occlusions. Using historical materials to prototype a technology amplifies the meaningfulness of these absences.

Put this way, prototyping the past is intertwined with close reading. However, its emphasis on physically remaking historical technologies expands hermeneutics to include the centrality of translation and tacit knowledge toin media history. By re-contextualizing historical technologies in the present, prototyping also accentuates differences across time. What was once an innovation in the 1860s becomes a relic in 2015. Alternatively, these differences across time may turn things of the past into the stuff of present-day current curiosity., thus complicating distinctions between old and new.

Rather than transcending such differences, prototyping the past grounds media history in a particular thing and the interpretations it affords. Following the work of Karen Barad, such grounding posits prototypes as entanglements of meaning with matter by attending to the substance of “fine-grained details” (Barad , 2007, p. 90). Here, neither meaning nor matter can be relegated to a concept or abstraction. Again, situations are significant. And prototyping reminds scholars of that significance. It is an embodied process involving frustration and surprise, trial, and error, and it highlights how technologies do not emerge effortlessly from the brilliant minds of inventors or makers. Prototyping also reminds scholars that 1) the sources of meaning are forever unstable and under dispute, 2) historical materials are not complete“total” works but rather compositions of parts that change—degrade, rot, morph, warp, break, or swell—over time, 3) prototypes can be de- and remanufactured without significant material consequence, and 36), as noted earlier, materials resist or diffuse as many interpretations as they facilitate.

Based at the Maker Lab in the Humanities (“Lab”) at the University of Victoria, the Kits for Cultural History (“Kits”) remake technologies from the past, package them in bespoke containers, contextualize them with historical materials, and encourage people to experiment with them. Comparable to Heathkits, the Kits include components and guides for assembly. However, the guides are steeped in cultural history and do not assume a single approach to assembly. By design, this resistance to uniformity is essential, since the Kits focus on technologies that are inaccessible today. These technologies are not found in galleries, libraries, archives, or museums; they no longer function as they once did; or they were never actually built or mass-manufactured. Such inaccessibility necessarily entails a degree of uncertainty where research is concerned. Rather than approaching this uncertainty at a remove, the Kits prototype absences in the historical record and prompt audiences to examine the contingencies of that record. Anchored in design-in-use, this method approach presents prototypes as negotiations or situations for interpretation, not replicas.

The Kits’ design cycle may be visualized as follows: 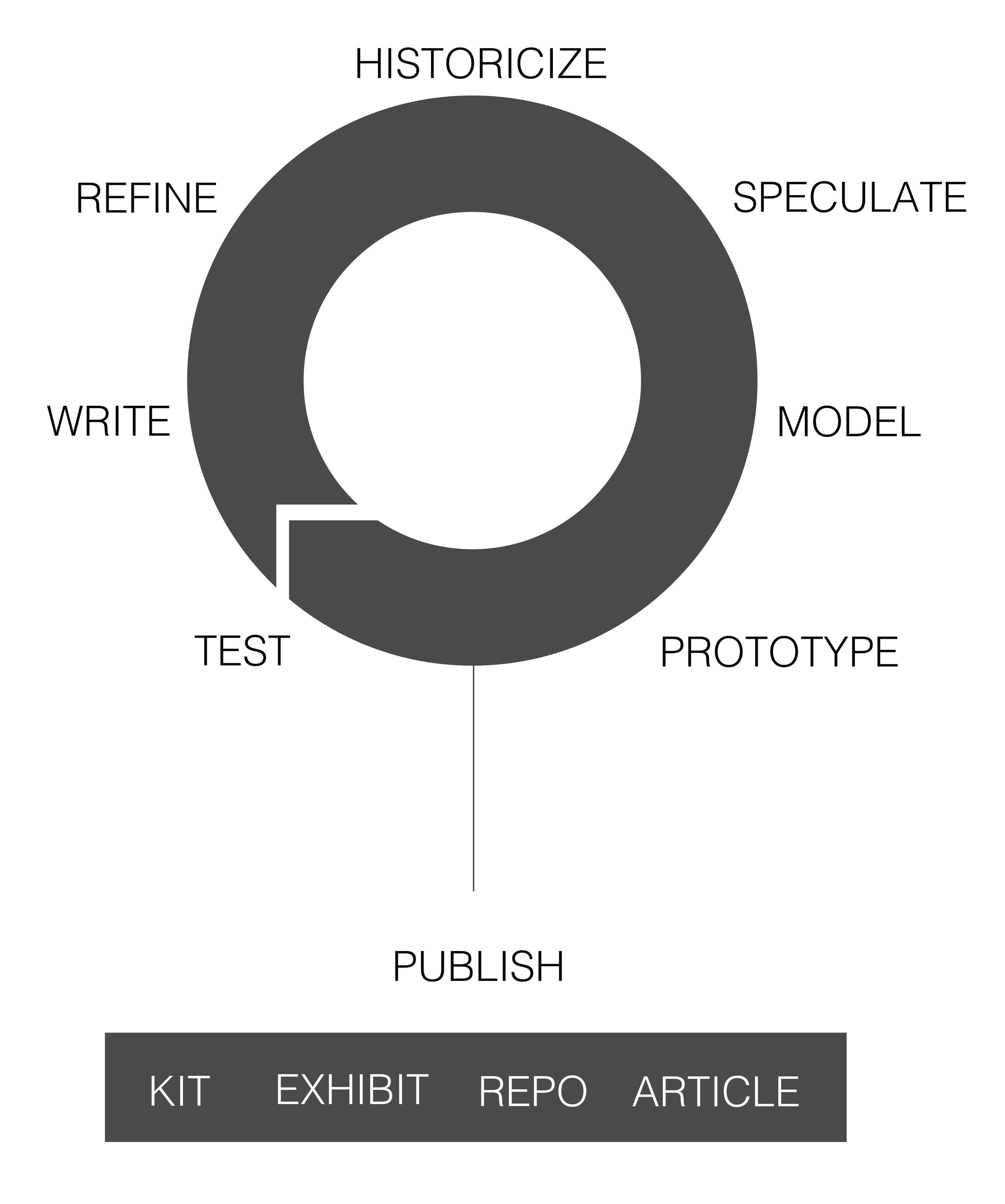 Figure 1: Design Cycle for the Kits

Once the Lab selects a technology for remaking, we historicize it through archival materials. Informed by existing theoriesy, we then speculate about absences in the record and determine how those absences might manifest in tactile form. Next, we model, fabricate, and assemble the technology’s component parts into prototypes, which we test and share with other researchers. After feedback, the Lab writes about the process and related history. When bundled together, the writing, prototyping, and testing refine ourthe research, and the cycle is repeated until we deem a Kit persuasive. Once a Kit is ready for circulation, we publish it in tactile form, as a repository of digital files, and through an exhibit. With these, the Lab also authors articles about the Kit’s contribution to media history, theorhistory, and design. We treat these publications—the tactile Kit, repository, exhibit, and article—equally as elements of scholarly communication.

Throughout this cycle, we ask several questions of what we are prototyping: 1) Who made it? For whom? When? 2) How was it made? How did it work? How was it used? 3) Do any instances of it exist? If so, where are they? Can they be handled? 4) Under what assumptions was it made and used? 5) How might prototyping it shape design in the future?

We have used this process to produce three Kits thus far: an Early Wearable Kit (for an electro-mobile skull stick-pin from 1867), an Early Magnetic Recording Kit (for experiments involving steel wire, telephones, and carriages during the late 1890s), and an Early Optophonics Kits (for a reading aid patented in 1919).

The Kits support the following observations about the articulation of CNC techniques with media history: 1) prototyping the past demands methods from the humanities, engineering, and fine arts; 2) prototyping is not always futurist or restricted to forecasting; 3) 3-D media such as tactile models are not more persuasive than 2-D media such as illustrations; both include exaggeration and omission; 4) history remains inaccessible even with access to physical materials, which neither resolve issues of absence nor guarantee certainty about the past; 5) prototyping the past may actually resist nostalgia; 6) as with any research method, prototyping is not immediate and cannot access “real history”; 7) prototyping may be premised on not replicating history—on what we should not repeat; 8) prototyping tests suspicions of history by grounding them in fine-grained details of matter and meaning; and 9) prototyping the past need not aim for a rational history without remainders. Instead, it can recognize how the technologies we use to reproduce history exceed our control and understanding. Indeed, the speculative elements of prototyping can be anchored in the specificities surrounding historical absences—of what we cannot prove or do not know for sure but certainly shapes us.

The Social Sciences and Humanities Research Council, the Canada Foundation for Innovation, and the British Columbia Knowledge Development Fund have supported this research.

Put this way, the combination of media history with rapid prototyping corresponds with how Wendy Chun describes the aims of the New Media, Old Media anthology, which focuses on the “actualities of the media itself” and “the experience . . . of being entangled within it” (2005, p. 9).