The Computer Graphic Simulation of the Battle at Mount Street Bridge. Problems, Perspectives, and Challenges

Three-dimensional digital visualisations have been used in the last three decades to engage and educate by making complex data more comprehensible. These have been used across a wide range of fields including military, medicine, cultural heritage, archaeology, and history. In cultural heritage contexts, the potential of these technologies as tools in the process of knowledge production has been well demonstrated (see for example Sundstedt et al., 2004; Papadopoulos et al., 2015). Contested Memories: The Battle of Mount Street Bridge project has been exploring how to integrate a 3D visualisation as the primary text of a digital scholarly edition, raising issues of how the phenomenology of place and space can be used to design a new language of scholarly editions, one that has the ability to model experience lost because of technological and evidentiary constraints. This edition, like traditional DSEs, also brings together documentary evidence in the form of apparatus, reimagining digital textuality (see Snyder, 2015).

The project focuses on a battle that took place on Wednesday 26 th April 1916 during the week of the Easter uprising in Dublin. This particular battle, between a small group of Irish rebels (members of the Irish Volunteers) and the British army sent to Dublin to put down the rebellion is used here to investigate to what extent a networked virtual world can be accommodated into a scholarly editing paradigm developed for print (and more recently digital) to enable alternative forms of research, help in the interpretive process, and assist knowledge production for both general audiences and specialists.

The development of the primary text in a gaming platform posed significant challenges, many of which have been ameliorated when creating digital editions of print or manuscript  sources through such methods and standards as XML, The Text Encoding Initiative, and XML-aware databases. This case study will explore these challenges, the project’s accomplishments, and future directions.

Contested Memories: The Battle of Mount Street Bridge is one of the four projects developed under the Humanities Virtual World Consortium (HVWC) and is funded by The Andrew W. Mellon Foundation. Four virtual worlds are being constructed, each released as Unity3D builds (2015), while a shared virtual world platform ensures the sustainability and interoperability of these as well as future projects.

2. Historical Background and Purpose of the Digital Simulation

The Battle of Mount Street Bridge has attracted much scholarly attention not only due to its significance during the Easter Rising but also because of the varied and contradictory accounts of British casualties, as well as the timeline and British strategy during the battle. Seventeen Irish volunteers took positions at four different buildings in and around on a one block stretch along Northumberland Road in a leafy suburb of Dublin (fig. 1). They prevented two Battalions of British soldiers known as the Sherwood Foresters (some 1,750 men) for over six hours from progressing into the city centre.

Although there exists a significant amount of documentation for the battle from both British and Irish sources, some of it written in the 1920s (The Robin Hoods, 1921; Oates, 1920), with other sources given as oral histories between 1945-1955 (see the Bureau of Military History), scholars have not been able to map, both spatially and temporally, the contours of the engagement so as to understand how such a small number of rebels could inflict such heavy losses on a trained group of soldiers.

Thus, a  goal of the project is to employ spatiotemporal methods in order to create a model of the environment in which the battle took place as well as simulate certain key events to enable researchers and specialists to visualise the conflict as well as to understand how the conflict unfolded. 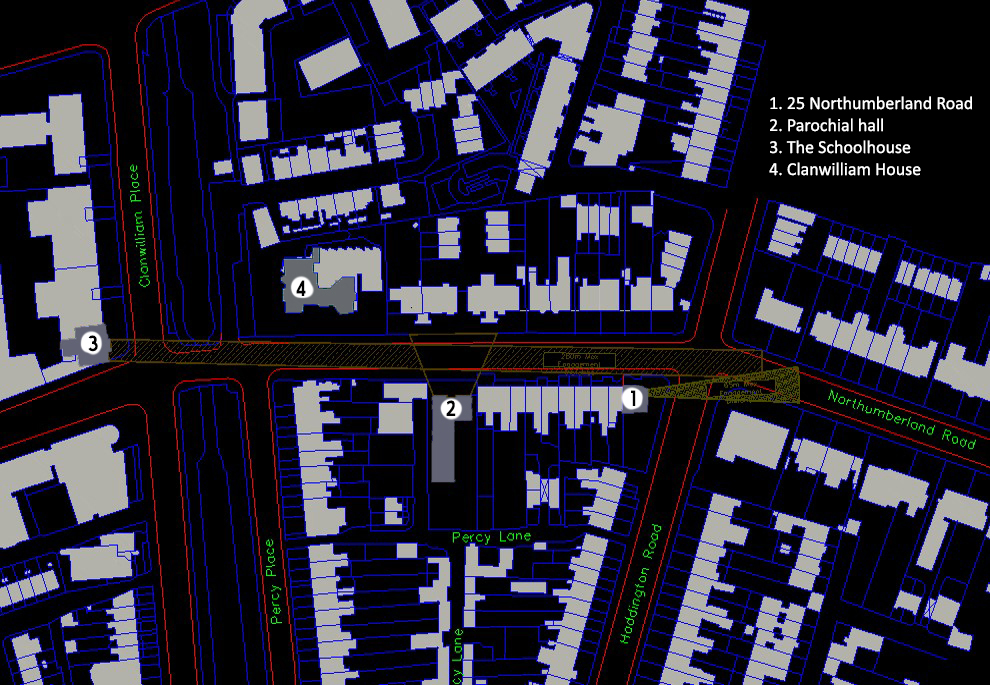 Figure 1. Location of buildings occupied by the Irish Volunteers

This project employed a range of research methods in order to obtain relevant information for the battle and inform the decision-making process of building the virtual world. Firstly, conventional archival research and meetings with military historians were carried out to document different sources (both contradictory and fragmentary) that provide evidence for the buildings that were occupied, participant accounts, the weapons they used, as well as the events that took place during the battle. Period photographs were used for the digital (re)construction of the area, while a Lidar Scanning of Northumberland Road helped in creating a highly accurate digital model of the battle scene. Ballistic experts and experiments at the shooting range provided a well-informed recreation of bullets’ trajectories and guns’ sounds and reload rates. 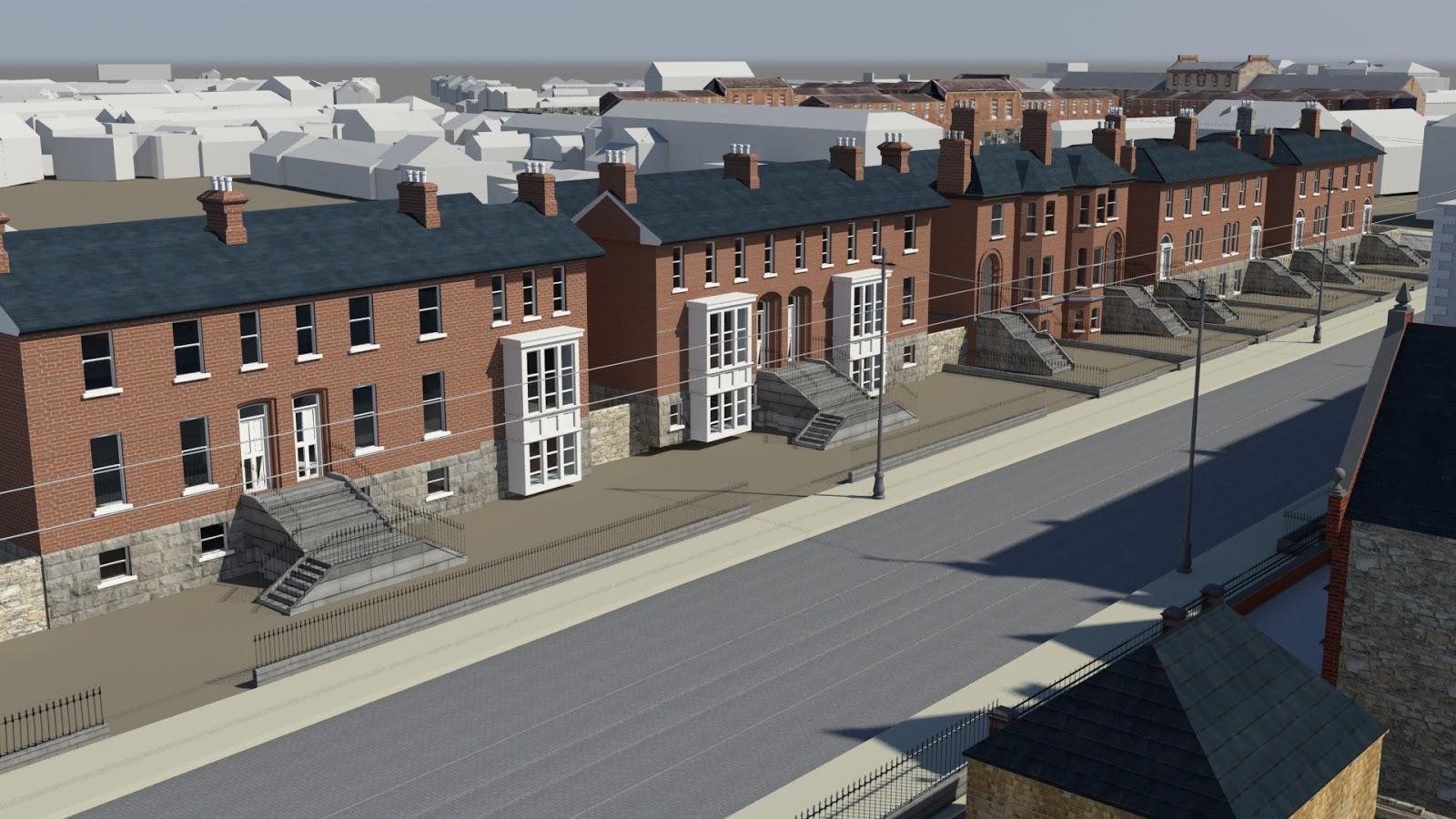 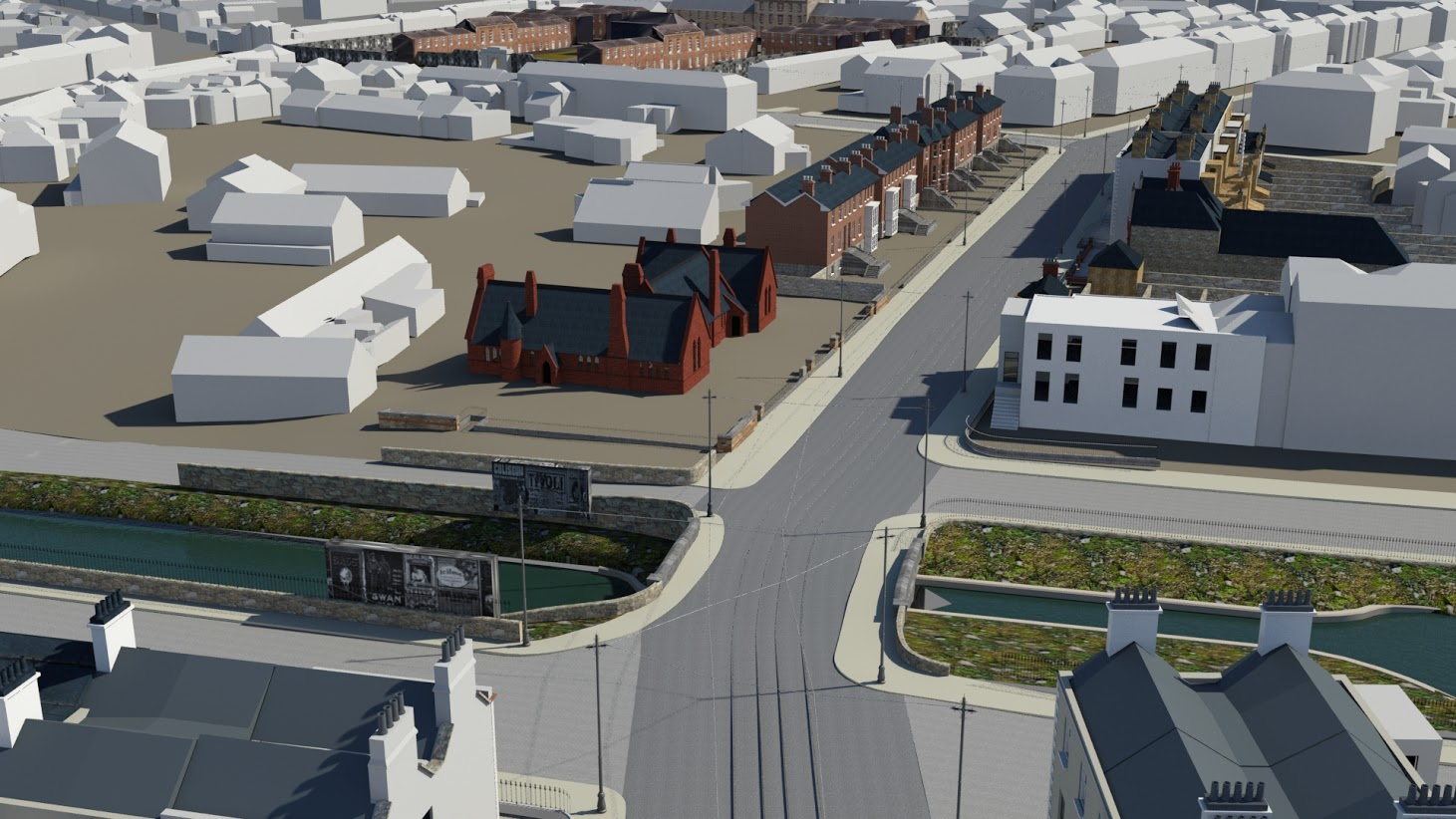 Figure 3. Rendering of the battlefield. Building and features that were significant in the conflict were modelled in more detail, while a schematic view of the broader area provides adequate context to the users.

The above information was used as the basis to construct a 3D model of the battle scene, as well as annotations for the Irish Volunteers and the British forces, weapons, and buildings at Northumberland Road and the adjacent streets. The purpose of this visualisation is not to present an exact representation of the battle. Rather, it is a tool to investigate alternative interpretations, as well as provide a case study to engage in ongoing interdisciplinary debates regarding the nature of digital reconstructions (Bentkowska-Kafel et al. 2012; Clark 2010; Kensek et al. 2004). The 3D model was constructed in 3ds Max 2015 (Autodesk 2015) (fig. 2, 3) and was migrated to the game engine Unity3D (2015) in order to enable a navigable in-browser 3D world for users to explore. The first version of the virtual world (November 2015) used all the capabilities of Unity Web Player (fig. 4). However, given the limited support of NPAPI, the plugin framework that Unity Web Player uses to enable detailed and high resolution models to properly function in web browsers, the second version (February 2016) implemented WebGL technology, which at the time of writing this paper, only supports light-weight applications. Therefore, most models of the virtual world had to be optimised, while detailed models of the city that provide contextual information for the Battle had to be omitted (fig. 5). Users of the virtual environment are able to navigate the world in first person-mode, while not having in-world representation in order to avoid modern figures being visible in the battle field.

Figure 4. First version of the Virtual World embedded within the digital scholarly edition

The digital simulation of the Battle of Mount Street Bridge provides a novel methodology for knowledge production and understanding in historical research demonstrating how computer-based simulations can augment traditional approaches in historical datasets, enhance the interpretive process, and potentially provide answers in complicated research questions. It was the process of producing the digital simulation and not simply the end-product that provided valuable answers to our questions. Once the model was completed, however, new research questions emerged, as historians interested in the period, as well as the public, began interacting with the model.

Future development of the project includes embedding narratives about in-world objects (buildings, avatars etc.), contextual information and decisions, animations of the broad contours of the battle, an AI simulation of key events, and a Mixed-Reality application tailored to the general public and secondary school students.