In the introduction to The Production of Culture and the Cultures of Production, Paul du Gay points out that culture and economy are mutually constitutive in the present day. Not only are most of popular cultural products manufactured by organized industries, but the production activities themselves also manifest cultural values (Gay, 1997). Our project is theoretically oriented toward the latter, the cultures of production. Although relatively less studied than the production of culture led by the theories of the Culture Industry (Horkheimer & Adorno, 1997), significant scholarship has been conducted to discern the cultural patterns of the film and television productions, such as John Thornton Caldwell’s book, Production Culture: Industrial Reflexivity and Critical Practice in Film and Television (Caldwell, 2008). The primary data Caldwell and other researchers used are trade publications, interviews, and field observations. Sharing the same theoretical inclination of Caldwell, our research breaks the methodological new ground by analyzing the most conspicuous records of film production—the credits shown on film itself.

Influenced by fiction publication and theater programs in earlier years, film crediting convention has evolved throughout the history of cinema. Today, it is typical for an American film to open with a title sequence and end with a longer rolling credit crawl. The end credits for big production blockbusters are relatively lengthy, featuring both above-the-line categories such as director, producer, and cast, and below-the line categories such as production assistants, camera operators, electricians, special effects specialists, sound editors, etc. As records of film production, film credits contain a plethora of vital information, disclosing not only involved labor (personnel), and corporations (financiers, production companies, and distribution companies), but also procedures (e.g. special effects units and location shootings), and technologies (e.g. Panavision cameras and Chapman camera cranes).

The scholarly attention to film credits has steadily increased in recent years. Many focus on the credits’ aesthetic and philosophical values (de Mourgues, 1993; Moinereau, 2009; Tylski, 2009). Some use film credits as an evidence to study the Hollywood star system and labor hierarchy (Clark, 1995; Chisholm, 2000; Carman, 2008). Will Straw’s article “Letter of Introduction: Film Credits and Cityscapes” represents a significant contribution by linking the design of the title credit sequence to the socio-historical condition of film viewing – the development of city life after World War II (Straw, 2010). Two recent dissertations also offer interesting insights (Allison, 2001; Crawford, 2013). Allison’s research is statistical in nature but only confined to opening title sequences. Crawford’s dissertation presents multiple perspectives (aesthetic, legal, and industrial), convincingly justifying the importance of film credits.

This project focuses on actually accessing and analyzing film credits to generate insights into the evolution of film production. More specifically, we propose to employ large-scale computation to perform comparative analysis on film credits. Digital computation is necessary to carry the study of film credits to another level since physically examining the credits even for one film is a daunting task. The final crawl of Dark Knight (2008), for example, runs for 7.5 minutes and contains hundreds of names and entities. The listed order and naming of some categories also differ from film to film. Besides increasing efficiency by substituting for human labor, digital computation also invites a large quantity of research subjects. These methods will potentially discover patterns across an extended period of time as well as across national and genre boundaries. We are confident that the potential of film credits as written records will be fully tapped with the aid of digital computation, and our research project will represent a major contribution to film studies.

Our project is mapped into two stages. For the first stage, we will pull available digital records of American films on the Internet to perform some statistical analysis. The second stage will see the expansion of selected works from American films to Chinese films. The Chinese film industry is chosen because of its dramatic development trajectory in the last 30 years. The industry was resuscitated in the 1980s from its near death in the Cultural Revolution (1966–1976) (zero output for three years), and only found itself slipping into financial crises throughout the 1990s in its attempt to balance political and commercial imperatives. Just when the industry was on the brink of collapse at the dawn of the new millennium, it picked itself up with full-scale capitalization while still maintaining substantial degree of governmental control. Charting an extraordinary growth curve to the present day, the Chinese film market has become the second largest in the world since 2012, and is on track to overtake the United States in 2017 or 2018 if the current growing pattern sustains. Tracing the information listed as credits over time and comparing to that of Hollywood will demonstrate the trajectory of both local changes and external influences in the development of Chinese commercial cinema. Because the digital records of Chinese film credits are not as readily available as their American counterparts, we will employ video-capture as well as optical character recognition technology to establish source data sets.

In this conference paper we will present some of our preliminary findings from the first stage. We have developed a software tool to aggregate and analyze records from International Movie Database (IMDB) for analysis. The application is implemented in Java and can parse IMDB records, extract named entities, conduct statistical and association analysis. One of our queries is the number of people listed under major credit categories as documented by the IMDB. We selected 20,690 titles since 1900 with at least one director and at least 10 cast members (actors and actresses). The average number of crew for each film over years is shown in Table-1. For 1900 to 2010, the film statistics are aggregated every 10 years. For example, “1900 to 1910” refers to films released between Jan. 01, 1900 and Jan. 01, 1910. Figure 1 shows the growth of cinematographer, composer, costume-designer, director, editor, miscellaneous workers, producer, production-designer, and writer categories. And Figure 2 shows growth in the number of actors and actresses.

From Figure 1, we can see the dramatic increase in the number of credited producers and miscellaneous workers (below-the-line film crew) over time. After years of steady increase, the number of producers took off around 1975, the same year that saw the release of modern blockbuster prototype Jaws. Our findings put a direct link between the spreading of the blockbuster business model and the number of producers on board. The miscellaneous worker category displays an even steeper rise. Interestingly, the time of dramatic increase coincides with that of producers – around 1975, but its down size in the early 1990s has no parallels. This graph pinpoints key historical moments for further investigation in the area of union activities, film labor division and representation. Finally from Figure 2 we can see that the gap between male and female cast has remained steady over a century. The biggest gap, however, does not appear in recent years when superhero films reign at the box office – probably thanks to an increased awareness of gender equality – but in the period of 1925 to 1945. Our findings invite further scrutiny into the pre-Paramount Decree (1948) years to study gender dynamics in Hollywood. From this perspective, the conventionally-defined golden age of Hollywood studio era (1927–1960) (Bordwell et al., 1985) may not be as seamlessly continuous as once conceived. 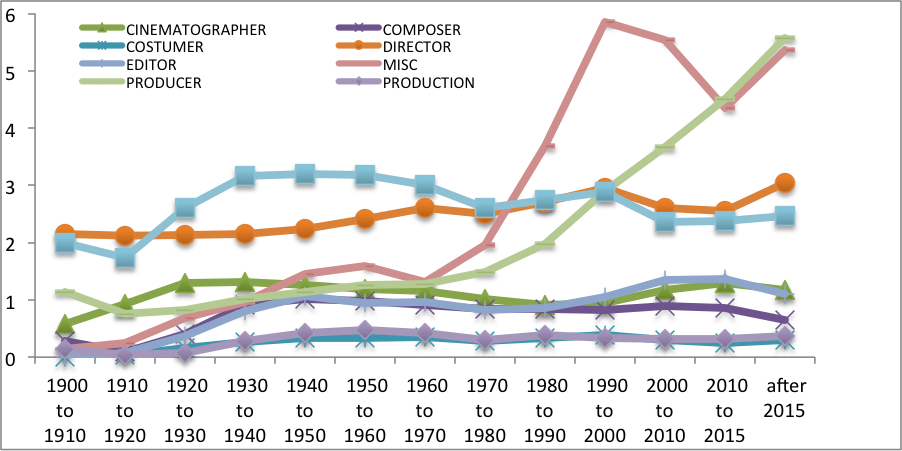 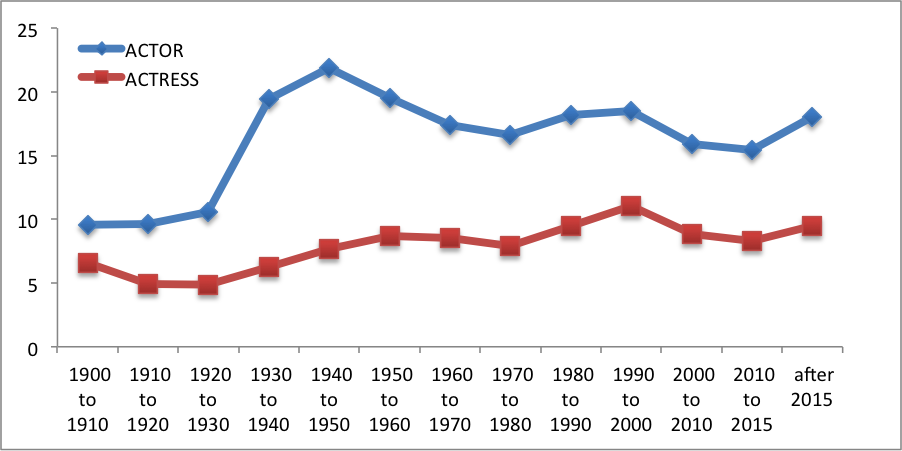 Figure 2 Average number of actors and actress per film

In summary, these preliminary findings illustrate the mechanism of using computation to analyze the credits of a large number of films across historical periods. The inquiries described above all fall into the category of the “personnel.” There are three other categories for future considerations: companies, procedures, and technologies. We believe that the computation-aided study of film credits will detect patterns or gaps, which will serve as important clues and evidences to analyze the cultural dynamics of film production.