Language maps play a crucial role in increasing our understanding of the geographical distribution of linguistic groups (Lameli, 2010). Many language maps represent languages either as polygons or points. Each polygon in Figure 1, or point in Figure 2, represents a language of Africa. 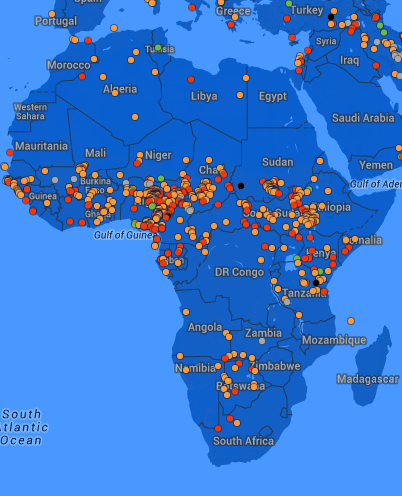 While these maps are useful for gaining a general insight into the linguistic makeup of an area, there are issues with the way they represent language communities. Languages are not commonly spoken by a monolingual population who live across a continuous area with discrete boundaries. Language boundaries are fluid, and both individuals and populations are often highly multilingual, for example in some sub-Saharan African settings (Lüpke and Storch, 2013), and also in many large cities (Extra and Barni, 2008). A notional “centre” for a language is also problematic. Speakers of a language are typically dispersed across a large area, meaning that a single point chosen to represent that community can only represent some important cultural centre (Dahl and Veselinova, 2006).

Both polygon- and points-based maps represent languages as monolithic entities which have an existence separate from their speakers, cf. the notion of “competence” (Chomsky, 1965). An alternative way to view languages is as “communities of practice” (e.g. Wenger, 1998; Eckert, 2000) - loose associations of individuals who participate in shared social practices.

One way to represent the spread of communities of practice is to map recordings of community members’ performances, because these represent a moment in which speakers participated in a community of practice. Coupled with rich sociolinguistic information about speakers’ backgrounds and repertoires, a map of these performances represents not only all the places in which a language is spoken, but also who speaks it, and which other languages those speakers speak.

We have adopted this performance-based approach to language mapping on our website languagelandscape.org. The website is designed to enable anyone with an internet connection to create an account and add recordings of their languages to a world map. Other users can then access these recordings by browsing or searching the map. In order to encourage as many contributions as possible, we do not have any specific requirements for the type of data submitted. The metadata categories on the website are based on the International Meta Data Initiative (IMDI) standards and are stored in a relational database.

The language maps available on Language Landscape do not represent languages as polygons or single points, but rather as a series of points which indicate the locations where language recordings were made. The maps on LL are also, in this sense, “point-based”, since points are used to represent languages, but crucially these points indicate the locations of performances of a language, rather than the language itself. For example, the map below shows recordings of English added to the website, which may be taken as a proxy for (some of the) locations around the world where English is spoken: 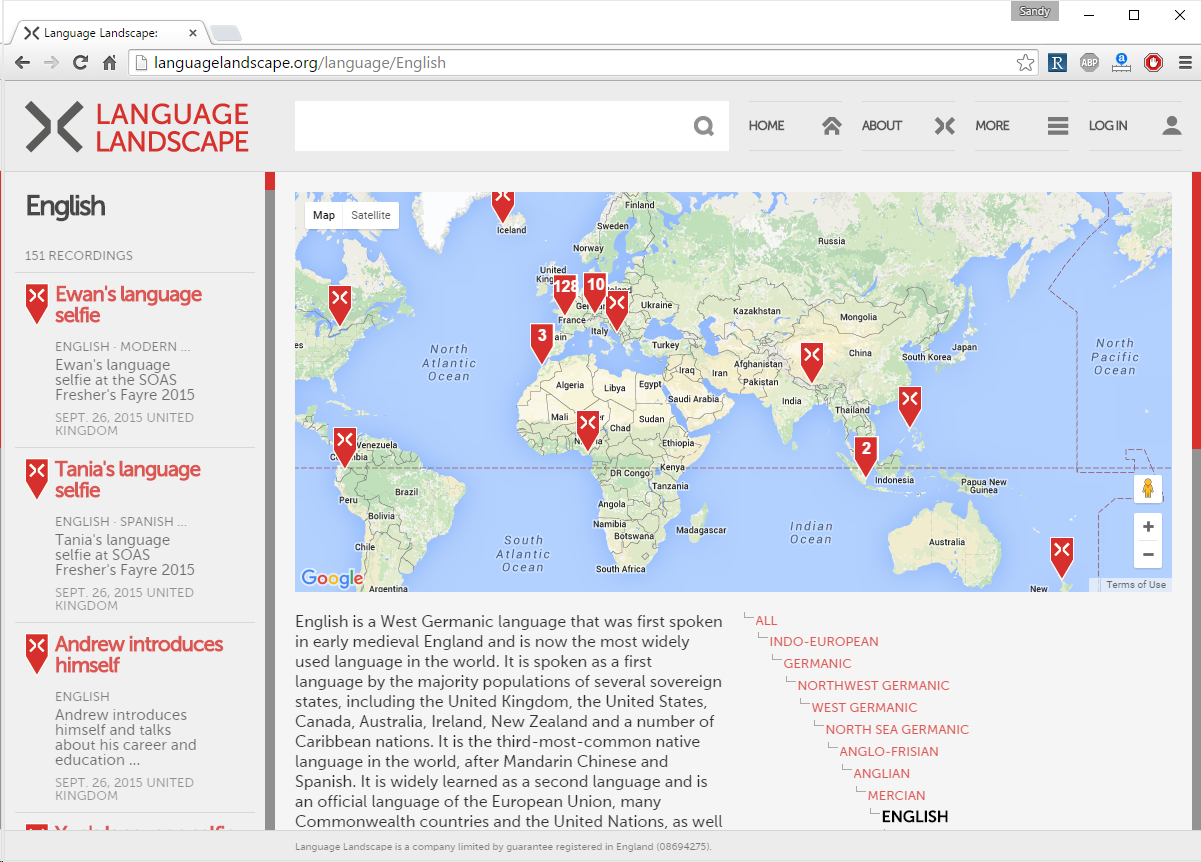 We believe that given a critical mass of contributors, the website could become a useful tool for a range of potential audiences. Contributions are currently skewed towards places where digital infrastructure is well established. However, technological advances mean that in 5-10 years the network will be available to more people. Resources like our website, which concentrate on promoting audio and video content in minority languages, will play a crucial role in convincing new users that the internet is a useful and valuable tool for communicating remotely.

In order to encourage more contributions, we target students who have expressed an interest in languages through their course choices. We have helped university students in London, Croatia, Germany and Poland to run projects, and have run outreach projects with 12-13 year olds in a school in East London. Promotion of the site on social media has also resulted in members of the public contributing recordings to the site.

We hope that the website will contribute to efforts to increase the number of languages and cultures currently represented on the web. We want to provide a platform where people feel comfortable representing their own language and culture in the way they see fit, rather than feeling compelled to participate in one of the dominant cultural forms which make up so much online content (e.g. Kornai, 2013).