Stylometry on the Silver Screen: Authorial and Translatorial Signals in Film Dialogue

Stylometry based on quantitative analysis of linguistic features such as most frequent words, lemmata, or parts of speech, is a time- and research-proven tool in authorship attribution and plagiarism detection, and is now also used in more general literary studies as part of the distant reading revolution. It has been particularly successful in grouping long texts by their authors in both supervised and unsupervised machine learning tests – and the appeal of this material to stylometrists is understandable in that novels are easily available and easily definable chunks of linguistic (and literary) material, and, despite rumors on the death of the author, most readily associated by the general reader with a single creative figure. And when they are not, discovering the fingerprints of more than one hand in collaborative works is another favorite pastime of stylometrists.

While perhaps equally avidly studied, the authorship signal in drama is often more problematic. This is probably why the most famous question, that of Shakespearean authorship, is so complex and so hotly contested – as evident, for instance, in a fairly recent debate (Craig and Kinney, 2009; Vickers, 2011; Hoover, 2012). Other difficulties in this genre include the “codification of … literary discourse” in certain literary periods and the fact that the same authors might write drama both in prose and in verse (Schöch, 2013, 2014); also, it may be supposed that, as dramatists create their characters through dialogue, there is a more or less conscious effort on their part to differentiate their style. This last phenomenon has also been researched in novels (Burrows, 1987) and translations of novels and drama, and the results could be equally problematic (Rybicki, 2006, 2007, 2008).

Even more distortion may be expected in a somewhat similar genre, that of film and TV dialogue – and its textual reflection in intralingual subtitles and interlingual translations. The final shape of filmic speech ascribed to a given screenwriter can be influenced by other agents, such as directors or actors. It can be further transformed in the process of intralingual subtitling, especially that performed by “fansubbers”, who do not necessarily reflect the exact dialogue spoken onscreen. This becomes even more of a problem in the case of interlingual translations, which by nature condense (subtitles, voice-over) or rework (dubbing) the original message, being at times anonymous versions of questionable quality (“fansubs”).

Quantitative methods have already found their way into audiovisual translation research (Pérez-González 2014; Baños et al., 2013), as exemplified by such projects as Pavia Corpus of Film Dialogue, used to examine sociolinguistic and pragmatic features of dubbed Italian (Freddi and Pavesi, 2009), or Forlixt1, a multimodal corpus which helps to investigate the interplay of verbal and non-verbal semiotics of the film (Valentini, 2006, 2008).

In comparison with the above attempts, our research was done on a specialized corpus of historical films and TV (mini)series. This choice was based on the assumption that the subgenre has unique characteristics which find reflection in film dialogue: namely, it authenticates the represented reality and it also adheres to the codes of realism existing in particular countries. This, in turn, made us look for the same phenomena in (English) originals and (Italian and Polish) translations, since translated dialogue, too, is shaped by stylistic necessities of the genre, culture-specific images of the past dominant in the target context, but also by norms and conventions of audiovisual translation in a given language/culture/country. The exact composition of the corpus is given in the table below:

From the point of view of film and audiovisual translation studies, our research project explores the concept of film/television genre and its distinctive features, focusing on the functions of film dialogue and linguistic/stylistic strategies used by screenwriters to fulfil them (Kozloff, 2000; Jaeckle, 2013). The first stage of our investigation consisted in a contrastive stylometric analysis of the extended Anglophone corpus, composed of both historical and non-historical film scripts, in order to verify our preliminary hypothesis about the genre-related specificity of film dialogue. We proceeded, then, to the analysis of parallel corpora of scripts in all available translations into Polish (voice-over, official and amateur subtitles) and Italian (dubbing, official and amateur subtitles). All this was done with several quantitative methods previously developed and used on other textual material, i.e. literary texts. In particular, frequencies of words from various frequency strata were compared between texts in each of the languages studied using the Delta procedure (Burrows, 2002). The analyses were performed with stylo (Eder et al., 2013), a package for R, the statistical programming environment (R Core Team, 2014), later also postprocessed with Gephi network analysis software (Bastian et al., 2009).

On the basis of these tests several observations could be made. As concerns the screenwriters, they tend to adapt the dialogues to the requirements of historical genre and the presented epoch. This is visible in Fig. 1, where the authorial signal seems to disappear whenever a given writer worked on two films and/or series set in different eras or belonging to a different, i.e. non-historical genre. 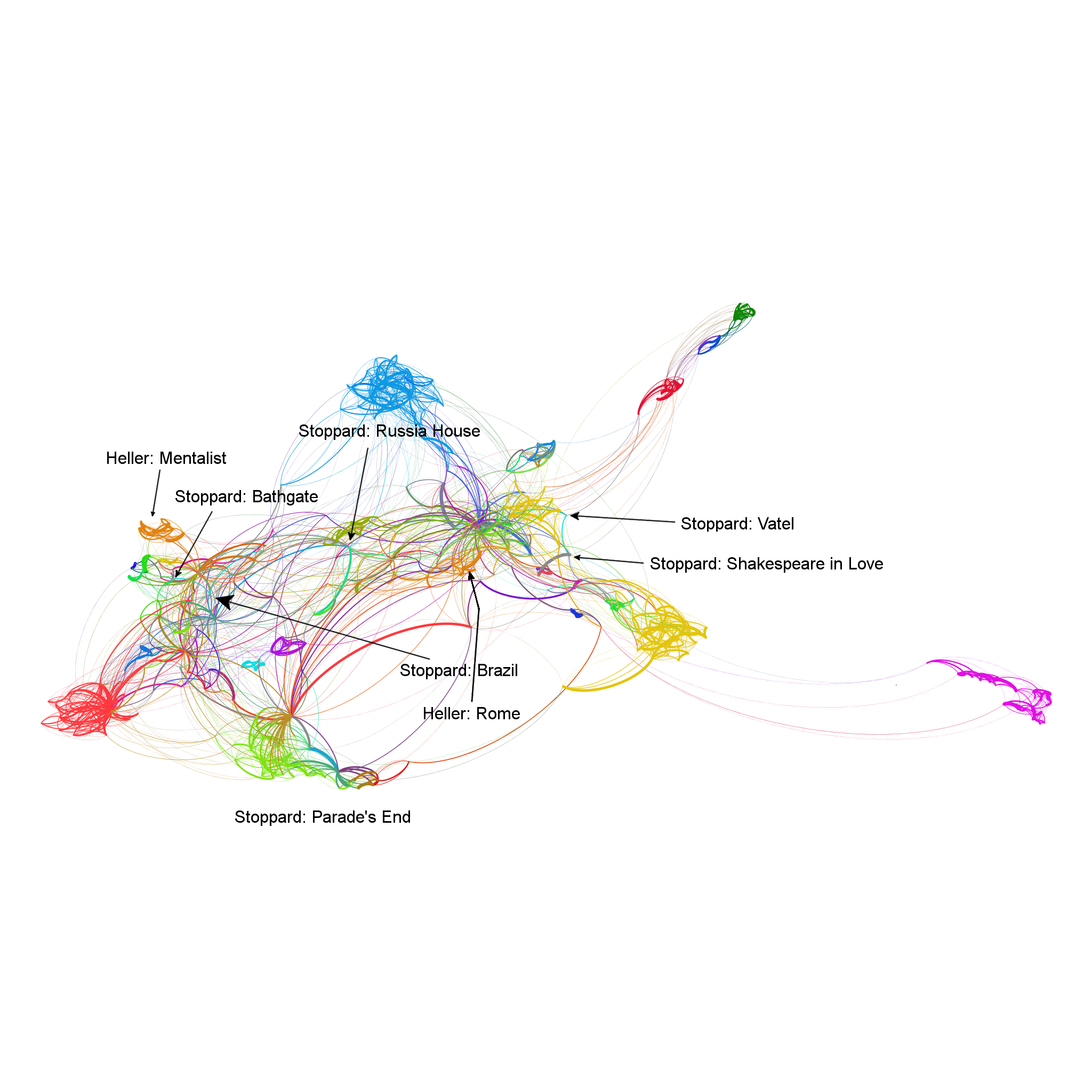 As concerns audiovisual translations, we arrived at rather unexpected conclusions. We compared versions of individual episodes of TV series and films in Italian (dubbing, subtitles) and Polish (voice-over, subtitles) by analyzing frequencies of single words and part-of-speech 5-grams; the latter measure was a rough approximation of syntax (Górski et al., 2014). As far as Italy is concerned, we noticed an astounding uniformity of style regardless of technique, be it subtitles or dubbing: translations of individual episodes of TV series and films clustered together in analyses of both word and part-of-speech frequencies. By contrast, Polish subtitles and voice-over scripts of the same episodes clustered together for single-word frequencies, while the latter formed their own clusters in part-of-speech 5-gram analysis. This is shown in Fig. 2 and 3. 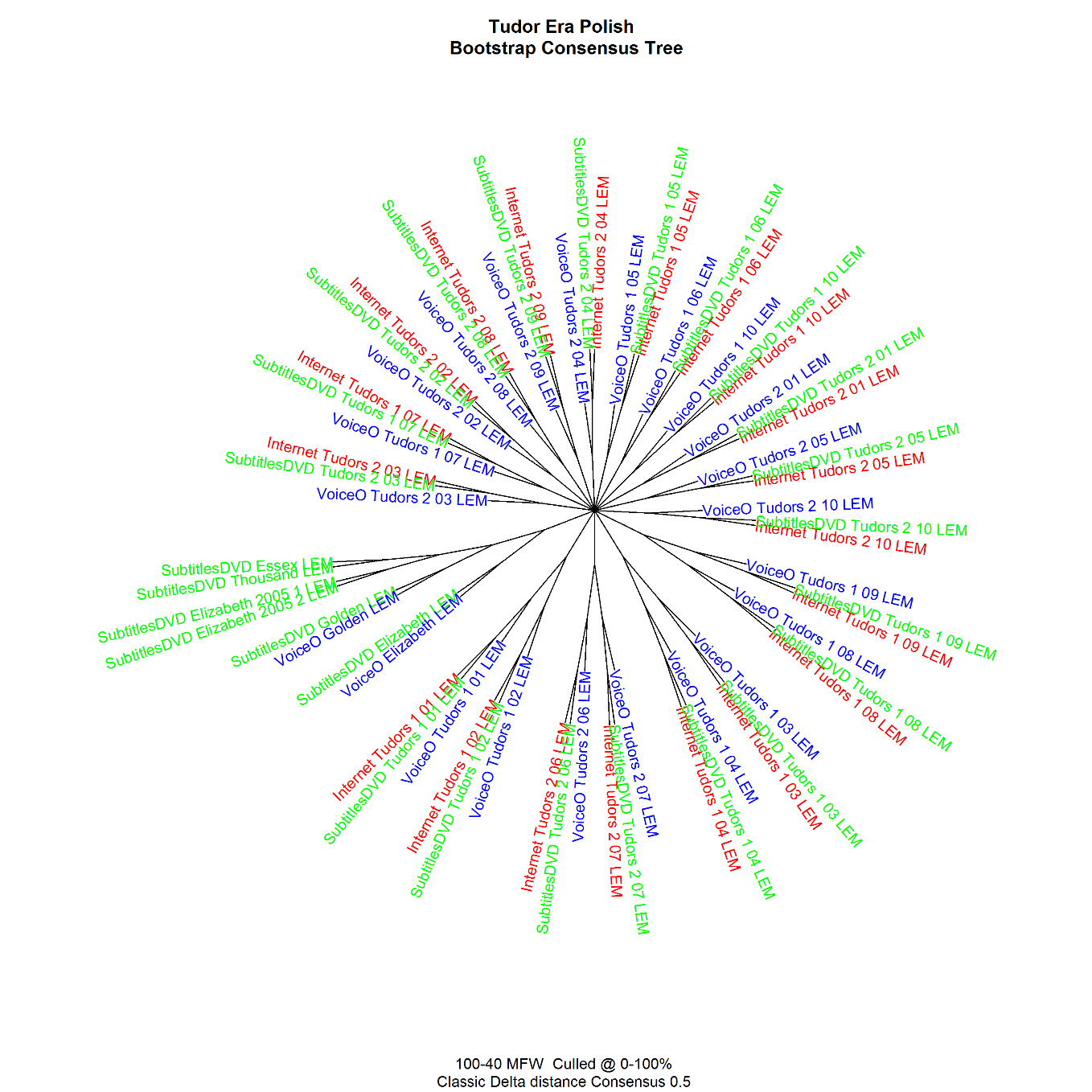 Figure 2. Bootstrap consensus tree for most frequent words in Polish subtitle and voice-over translations in a corpus of Elizabethan-era films and TV series. 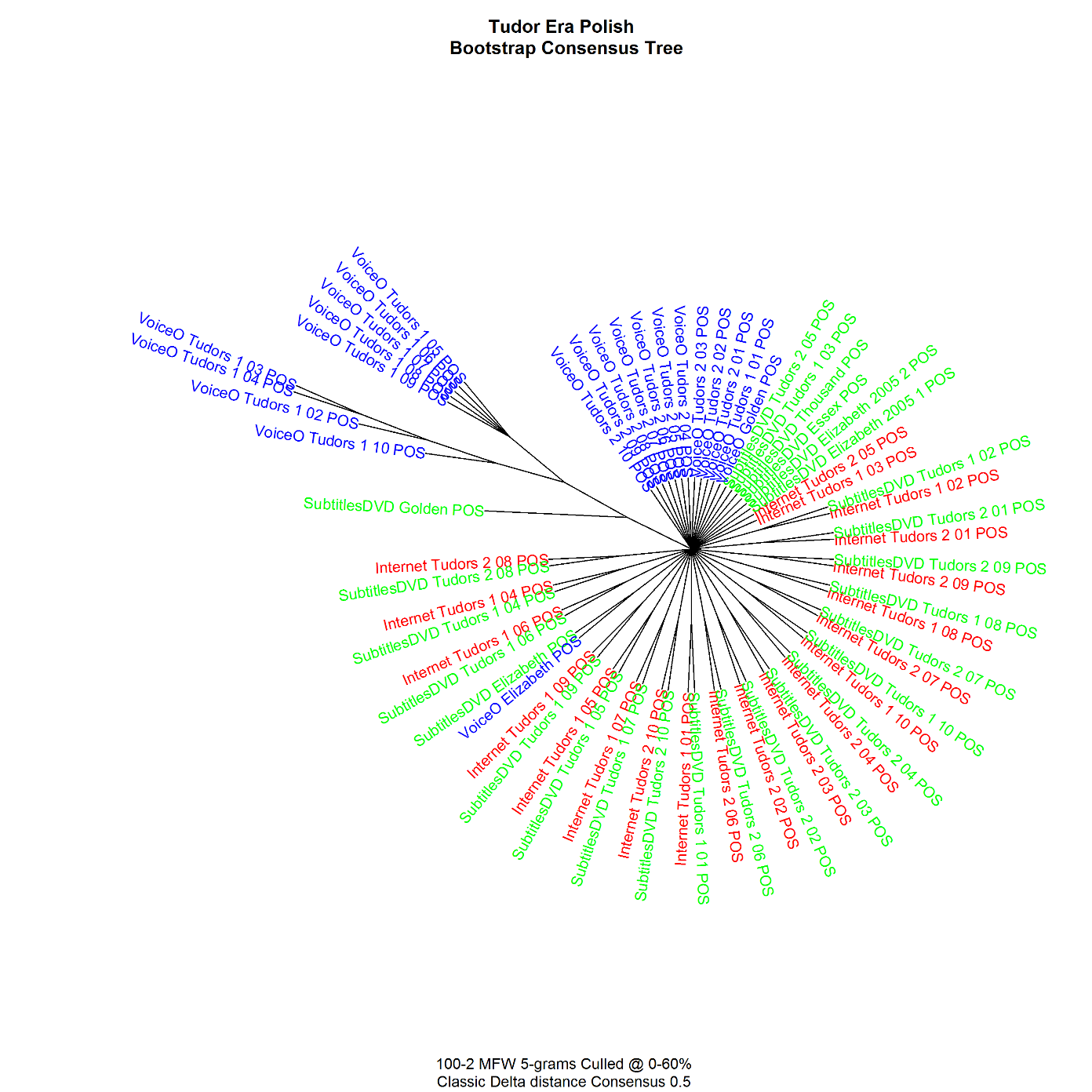 Figure 3. Bootstrap consensus tree for most frequent part-of-speech 5-grams in Polish subtitle and voice-over translations in a corpus of Elizabethan-era films and TV series.

Obviously, the similarities between dubbing and subtitles in Italian may stem from the fact that the latter are based on the former. However, the fact that even amateur subtitles, which usually are published before the release of the dubbed version, show a considerable affinity to dubbing, demonstrates high normalization of the formal language used in Italian historical films and television series.

All these results confirm our preliminary hypothesis that film genre influences the strategies of creating film dialogues and their translations. Although we believe that stylometric and computational analysis should not be the end in itself, it seems invaluable in audiovisual translation studies, encouraging closer qualitative analysis of the original and translated scripts. It invites further investigation of such issues as: