Digital humanities needs tools that better support the core processes of humanistic inquiry. This includes support for handling uncertainty and incompleteness in the data, for interactive exploration, and for fluidly moving between close and distant reading (Drucker 2011; Jänicke et al., 2015; Caviglia, Ciuccarelli, and Coleman, 2012; Uboldi and Caviglia, 2015).

The Khepri tool presented here is part of a project to develop a modular set of components that take these requirements into account, and can be connected and configured to respond to the needs of a particular humanities task and data. Khepri targets data stored as Linked Data (Heath and Bizer, 2011), a set of scalable standards that has gained widespread adoption particularly in the sphere of cultural heritage.

To ensure the tools developed meet the needs of humanities users, they are being developed iteratively, utilizing participatory design in case studies, as advocated by the field of design science (Hevner et al., 2004; Peffers et al., 2007; Wieringa 2009). The task of the computer scientist is to see beyond these individual studies; to identify common components allowing the tools to generalize beyond the projects under scrutiny.

To date, a variety of collaborations have been embarked upon, from the prosopographical study of the Republic of Letters 1, through supporting engagement with WW1 primary sources (Mäkelä, Törnroos, et al., 2015), to developing a contextual network for Finnish fiction (Mäkelä, Hypén, and Hyvönen, 2013). Together, these span a range of research questions, and types of data.

Through these collaborations, a prevalent process of inquiry was identified – the need to explore and contrast differently constrained subsets of a dataset. For instance, this might be looking at the correspondence networks of different individuals and comparing them, or looking at how possible values of a linguistic variable behave with respect to each other as well as associated metadata.

To support this process, Khepri utilizes the view-based paradigm (Mäkelä, 2010), where data is presented simultaneously from different perspectives, with each perspective acting both as a visualization as well as a means to constrain what is shown. A proper implementation of the paradigm also allows for speedy informed variation of parameters, and thus interactive exploration.

Because the views interact in a defined way, they can be developed as separate components targeting major visualization classes such as geographical, temporal or statistical. Each individual Khepri instance can then select from these the views suitable for that particular use.

Thus far, most of the work has been preparatory, with the functionalities simulated through ad-hoc disconnected components, tied together and supplemented by manual work of the computer scientist. However, now a first complete tool for a particular task has been developed. This instance has been configured for historical sociolinguistics.

Historical sociolinguistics is the study of language in relation to social factors through time (Nevalainen and Raumolin-Brunberg, 2003). A possible research question would be to chart the role of gender, age and socioeconomic status in the diffusion of the English progressive (as in I am writing). From the viewpoint of the Khepri tool, this is interesting because it requires combining access to unstructured text with access to the structured (meta)data describing their authors.

This is also the area where current tools fall short, for while corpus tools (e.g. CQPweb (Hardie, 2012), Korp (Borin, Forsberg, and Roxendal, 2012) and WordSmith 2) enable querying texts by linguistic features, they poorly support walking from the texts to the attributes of the authors. On the other hand, tools for visually exploring structured data (e.g. Palladio 3, Europeana4D 4 and RAW 5) do not support interacting with text corpora.

This makes research currently very labor-intensive. For instance, if one wishes to study the aforementioned progressive, one first searches for instances of -ing in the corpus using a corpus tool. The instances are then exported into Excel to analyze them and eliminate false hits such as gerunds (My favourite hobby is writing). Next, the number of hits produced by each person is calculated using another sheet that lists the authors by gender, age, socioeconomic status and time period. These numbers are then exported for statistical analysis and visualization. Because the corpus texts, spreadsheets, visualizations and statistical analyses are not connected to each other, the exploration and interpretation of the observations is cumbersome and time-consuming at every stage. 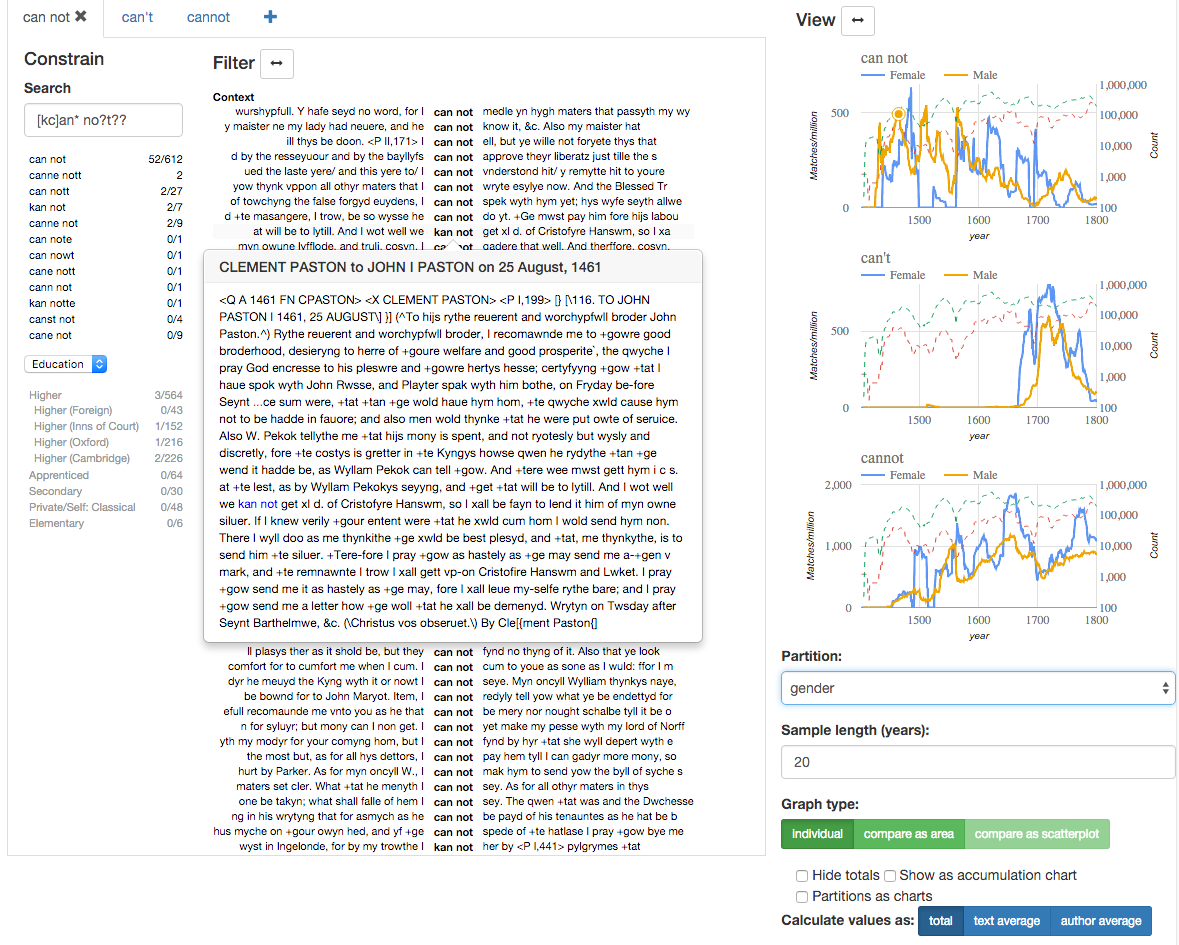 4. The user interface configuration of Khepri for historical sociolinguistics

The Khepri interface for historical sociolinguistics is depicted in Figure 1. The interface is divided into three columns, with the views contained in each having different primary purposes.

On the left are views aimed primarily at producing a subset of interest. The first view is for text search. Below the query, matching keywords from the data are presented for evaluation. Notice that two sets of counts are given. One shows the overall amount of hits for a keyword in the corpus, while the other takes into account constraints set in other windows. This way, the view acts not only as a selector, but also as a statistical breakdown of the current subset.

Below the keyword search view, the user can add metadata views. Here for example, a view visualizes and allows one to constrain the data through the lens of the author's education.

The second column shows the items in the current subset. Matches are shown in their textual context, with metadata and additional context available on mouse-over. While tuned for close reading, this view also acts as a filter. Clicking on an item removes it from the current subset. For linguistic research, this is important as the inclusion or exclusion of a particular example of a phenomenon may depend on contextual cues and background knowledge that cannot be defined as search parameters, but require manual evaluation.

When focusing on close reading, the column can be expanded to occupy the whole right-hand side of the interface. Expanded, the view shows additional metadata, such as the author and year of the texts. The view can also be sorted according to these properties, as well as grouped by them, so that for example only a listing of the authors, or the linguistic types (e.g. different words ending with -ing) is shown, with the individual matches revealed by expanding.

To further help in keeping a close reading task organized, the interaction between this view and the constraining views has been designed so that it is easy to temporarily restrict the matches shown to only those from e.g. a particular spelling, or a particular social class.

Finally, the column on the right is intended primarily for visualization. In fact, it can visualize and contrast multiple subsets of the data. To facilitate this, the first two columns are subsumed in a tabbing container, with each tab containing the query state of a single subset. In the example of Figure 1, these are spelling variants of the negated auxiliary verb cannot (written separately, contraction, written together).

By default, the frequency of each subset is visualized as its own line chart. However, numerous options affecting this are provided, drawn from best practices in the field (Hinneburg et al., 2007). For example, separate lines can be graphed for each of the values of a particular metadata property. In Figure 1 for example, each chart contains lines for male and female writers, showing that the use of the form “can not” seems to follow an approximately linear decline for men, but not for women.

To prevent misinterpretations arising from small samples, each graph can be accompanied by a dotted logarithm representing the size of the corpus as a whole for that metadata value. The interface also supports bootstrapping to visualize confidence intervals. As this takes considerable time to calculate, it should only be enabled when a seemingly significant discovery needs verification.

The interface also offers alternative charts. For example, when comparing possible values of a single linguistic variable, the area chart visualization shown in Figure 2 is appropriate. In addition, a motion chart visualization (Figure 3, inspired by the static scatterplots in Nevalainen, Raumolin-Brunberg, and Mannila (2011)) is provided, used to see how different individuals relate to the variable under study, and even how they change their use through time.

In line with the view-based querying paradigm, all visualizations also act as selectors, enabling delving deeper into interesting phenomena. Through them, one can for example constrain the instance list to show only usage by women in a particular timespan, or in the case of the motion chart, even the use of a single individual. 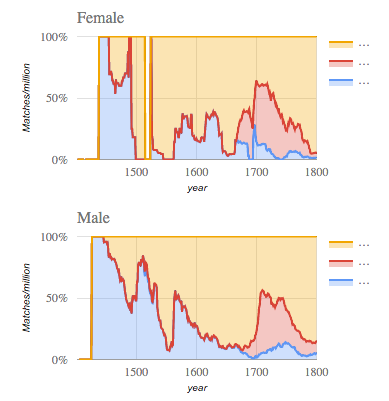 Figure 2. Area charts showing the relative proportions of “can not” (blue), “cannot” (yellow) and “can’t” (red) by time and gender

Khepri for historical sociolinguistics is the first complete version of the tool. It is also only in its second iteration, and will continue to improve based on feedback. However, it has already been received with excitement, enabling research that was previously too time-consuming to attempt.

With the architecture of the tool now in place, other instances will soon follow, targeting next the Republic of Letters and Finnish fiction use cases. This can be said because all the views created are actually generic, and can be pointed to different data by reconfiguring. For example, text search is also useful for locating individuals or books, while the metadata facets directly target structured data already. The views requiring most modification are the statistical charts, but even here work will be fine-tuning to match differing metrics. Correspondingly, any visualizations developed for other scenarios can be imported here, to for example visualize language phenomena on maps. 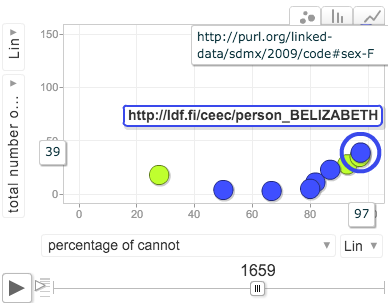