It frequently happens in the modern history that a certain cultural skill that used to be shared in a community or society is lost in the process of modernization. Over the last century, Japanese people have lost the basic skills to read kuzushiji, classical calligraphic renderings of Japanese characters (see Fig. 1). Since Japanese society ceased to use kuzushiji for publication after the Meiji Period (1868-), most Japanese today except trained experts are unable to read books printed with kuzushiji only 150 years ago.

However, from 2008 a group of scholars of Japanese literature have started calling attention to the need for providing younger generation with the tools to access their own past (Nakano, 2011 and Moretti, 2014). The kuzushiji project, which started in 2015, is an attempt to build a mobile learning application that provides resources and trainings for reading kuzushiji1. We call the app the KuLA (kuzushiji learning application). It is a public humanities project, as well as an interdisciplinary project of Japanese Literature and Digital Humanities scholars. In this paper, we will briefly describe the features, workflows, and implementation of the KuLA. 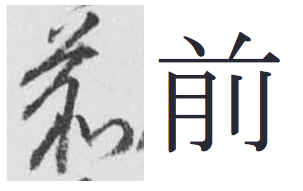 Fig. A comparison of a kuzushiji and modern Japanese type font. Both represents the same character 前, "front" in English

Learning kuzushiji is essentially similar with learning a foreign language. What you need for learning it are as followings: 1) the basic knowledge about kuzushiji, especially of character shapes, 2) decent amount of exercises of reading actual texts, and 3) good mentors and fellows who will teach and motivate you.

For the reasons above the KuLA consists of the following three modules: 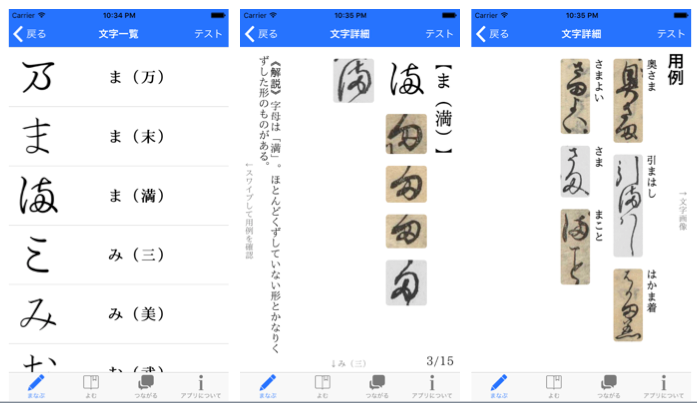 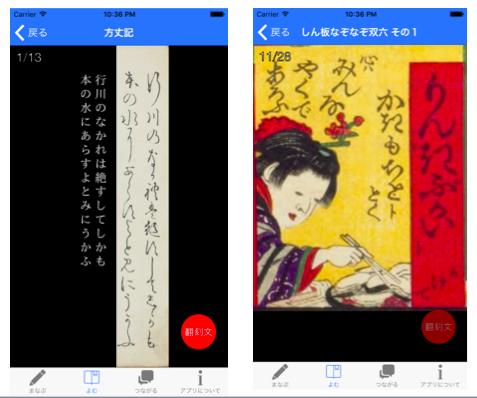 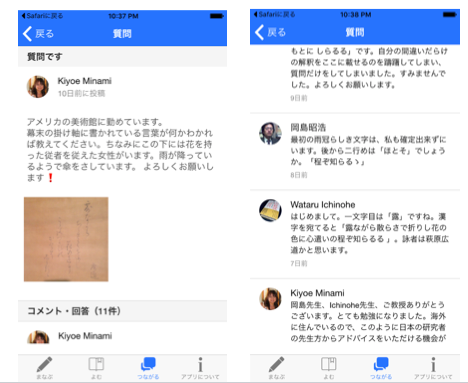 In order to create the teaching materials bundled with the KuLA we needed a lot of actual images of kuzushiji. For collecting them efficiently we developed a Chrome extension which enables to capture arbitrary image regions from the digital collection of pre-modern books provided by the National Institute of Japanese Literature2. The images captured by the extension will be automatically uploaded to an web app built with Ruby on Rails. In this way we have gathered so far about 3,000 images of kuzushiji characters3.

The mobile app was built with Ionic4, a HTML5 mobile framework based on Apache Cordova and AngularJS frameworks. The use of HTML5 technology makes it possible to generate the distributions both for iOS and Android from a single source code. As the backend of the mobile clients we used parse.com, which provides basic server-side features such as user authentication and data storage.

KuLA was released both on Google Play and on App Store for free on 18 Feburary 2016. It has been downloaded more than 5,000 times in two weeks after the launch. The average review scores are 4.5/5.0 in AppStore (total 15 reviews), and 4.9/5.0 in Google Play (total 29 reviews). From these numbers we may say that our design strategy for building KuLA was successful.

We believe that it is a duty of humanities scholars to build the tools to access the past knowledge for further generations. And what makes Digital Humanities special in this regard among other humanities discipline is that it can directly provide those tools with the public with the help of digital media such as mobile devices.

You can see the list of kuzushiji images we have collected in the following link: https://youreicollector.herokuapp.com/characters/