This study discusses the methodology used in The Digital model of Andalusia's Late Gothic Heritage project to develop new models of heritage interpretation through the application of GIS and Graph visualization to provide new perspectives of Andalusia's heritage by considering social, political, economic and cultural evolutions. Given the special period context considered, late 15th and early 16th centuries, the project used a variety of sources to relate heterogeneous historical data on different subjects in order to create a historical spatial database and to respond questions such as: How was the construction process in Andalusia between 1433 and 1560? What period and region had more constructive activity? How did the opening of the Andalusia´s eastern border modify the dynamism of the territory? What features are more common in each time period? What professionals have worked together on a building or quarry? Is this reflected in the architectural language produced?

Andalucía's territory is the consequence of a huge numbers of different cultures that passed through it - from Roman and Islamic to Christian. During the 15th century, Spain had profound transformations, both political and cultural. The Christian reconquest led to the centralization of the cultural production in major cities generating important flow of new knowledge. Also, the consolidation of the Iberian Peninsula´s borders and the growth of contacts with Europe, and in a near future with America as well, helped to improve the cultural expansion and exchanges between the political leaders, intellectuals, scientists and technicians (García C., 2011).

These transformations are documented by a large number of sources that usually focus only on one particular aspect. In this sense, some sources are about professionals that worked at the quarries, others are about building construction and labor contracts, or about journeys and meetings that the workers had had. On one hand, we are dealing with the data from researchers that studied the biography of a particular professional or studies that have been dedicated to the constructive evolution of a city or a building. On the other hand, we are analyzing historical cartography sources that show different territorial changes and stages over time (kingdoms, dioceses, borders, etc).

Thereby, our goal is to build a spatial-temporal database capable of linking information that at first glance may seem unrelated. Visualizing and relating these attributes through an information system on cultural heritage has steered our work in two directions: the creation of systems built around the entities, and the implementation of analyses to observe and interpret their relationships.

In this study we demonstrate how all different historical information could be organized and structured in two types of digital models - GIS and graphs - that will are applied to our case study and allow us to generate a more comprehensive and flexible understanding of the phenomenon of the late Gothic period as a complex system through a combined knowledge of space, time and actors.

Working with these two tools has provided new perspectives at the Late Gothic heritage, creating new groups and subgroups of entities, and new relationships that could be easily translated to other case studies. We also created different categories - for each technology - designing two models of organizational structure. On the one hand, we use GIS with a spatial approach, the space is the product and simultaneously the producer of a series of relationships (Lefebvre, 2000) whose analysis can be performed using the alphanumeric attributes of each spatial entity or its topology. On the other hand, using graphs we have an abstract approach to visualizing a network of professionals and works over the Late Gothic period. The creation of the two models is because each of these tools requires a specific way of organizing data. While GIS works with a system with fixed relational databases that support SQL "join" operations, using it as the main query language and organizes spatial data in layers and attributes, Graph model uses the NoSQL system (Not Only SQL) and organizes data in nodes and edges (Robinson et al., 2013).

The process of creating the GIS model will be developed in eight dynamic and interrelated phases: database design schema (figure 1); collection, processing and data selection; data entry and analysis in ArcGIS software; production model views; assessment of the problem; data interconnection; generating queries and reports; system development documentation and dissemination of the model (Ferreira Lopes and Pinto Puerto, 2015). The longest stage of the process is the creation of spatial entities - data entry - around 75% of the time and effort undertaken in the research will be used to collect, treat and create the data so that they can later be analyzed. The big difficulty lies in its accuracy. For certain entities, the maps and information of the 15th and 16th centuries does not allow us to reach an urban scale precision which forced us to work with a territorial scale. That is the case, for example, of the kingdoms, buildings, quarries or paths layers (figure 2). 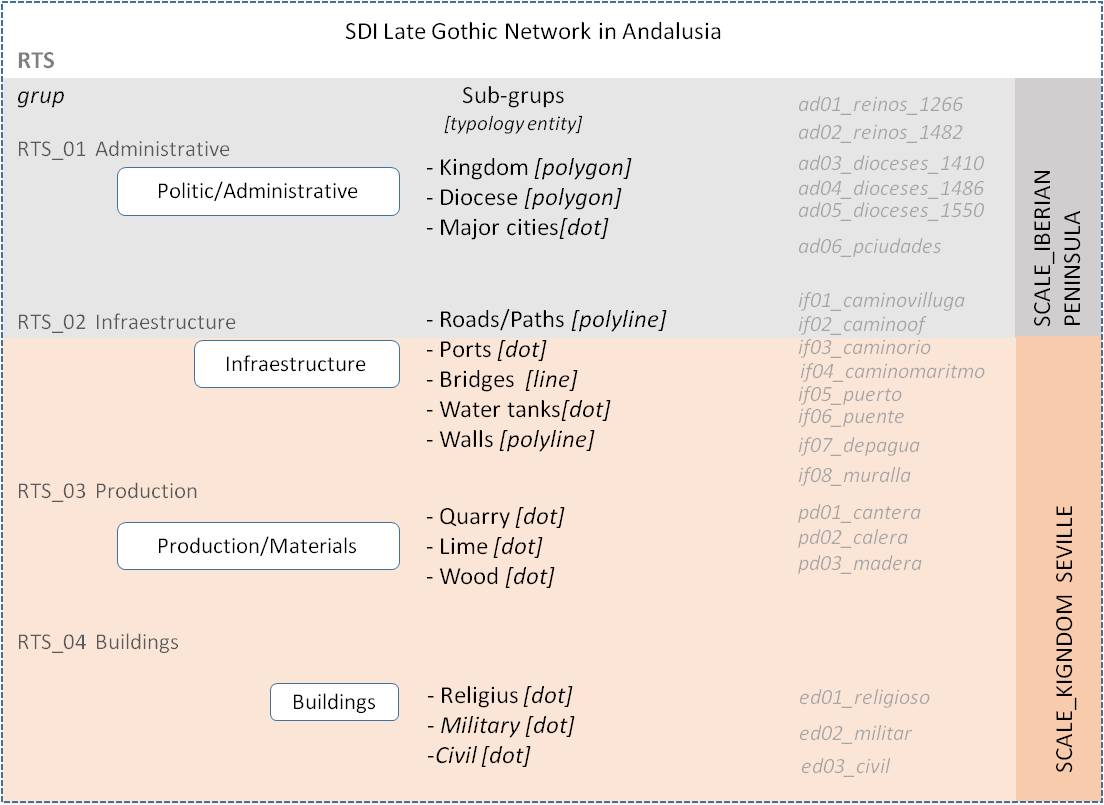 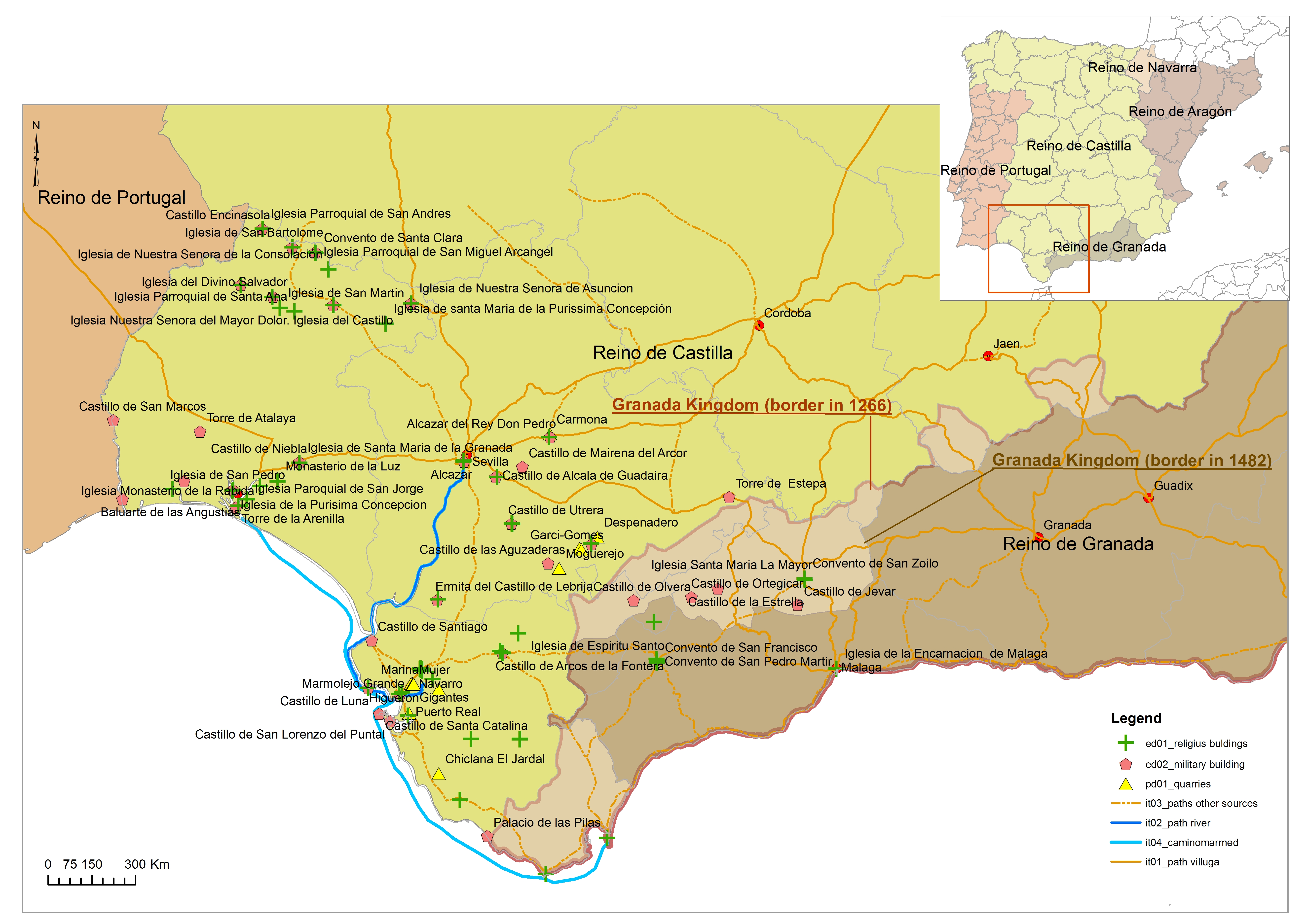 Figure 2: Andalucía's Late Gothic Heritage SDI, more than 100 buildings, 4.000km of paths, administrative and dioceses borders (which has changed through time), 14 quarries, and others entities

Also, some gaps are constantly present in the attributes; in many cases we have incomplete information, which somewhat limited our analysis of certain data. That is the case, for example, of some "date" attributes. However, working with GIS allows us to take these gaps temporarily - once it offers an easy way to edit and add new data, which is one of the main advantages that the tool offers. Our SDI are created in the ISO 19100 series standards, Open Geospatial Consortium standards and the recommendations of the guidelines of INSPIRE and LISIGE in order to be extended, edited and viewed by other researchers.

The construction process of the Graph Model has been developing in three phases: 1) data collection, 2) scheme creation and 3) queries and analysis. This paper will deal with the proposal and outline gathering held in conjunction with the Culture Plex Lab at the University of Western Ontario in Canada.

Our "starting point" was the Cathedral of Seville. Knowing that the construction of the Cathedral was one of the events most responsible for the flow of knowledge at that time and knowing that a lot of professionals had worked or had some kind of work relation with it, this strategy was more realistic and reachable, initially (figure 03).

To create the Graph model we are using the software Sylva DB (de la Rosa et al., 2013) developed by the CulturePlex Lab, which has allowed us to create a scalable and flexible way to organize, structure, manage, visualize and analyze our mass of data. With all the data in SylvaDB, we can see the links between different professionals and works, as well as between quarries and workers, parts of building and professionals, quarries and buildings. This tool has redirected the process in a way that otherwise would have been too taxing in terms of time and computation - we were now not required to create innumerable tables and charts to collect all the information.

After having a clear starting point and already with a certain amount of professionals collected - about 300 workers - the next step was the creation of a schema through which we discern graphic patterns. At this moment, in the Graph model we have 1.000 relationships and 850 nodes (figures 04, 05 and table 1). 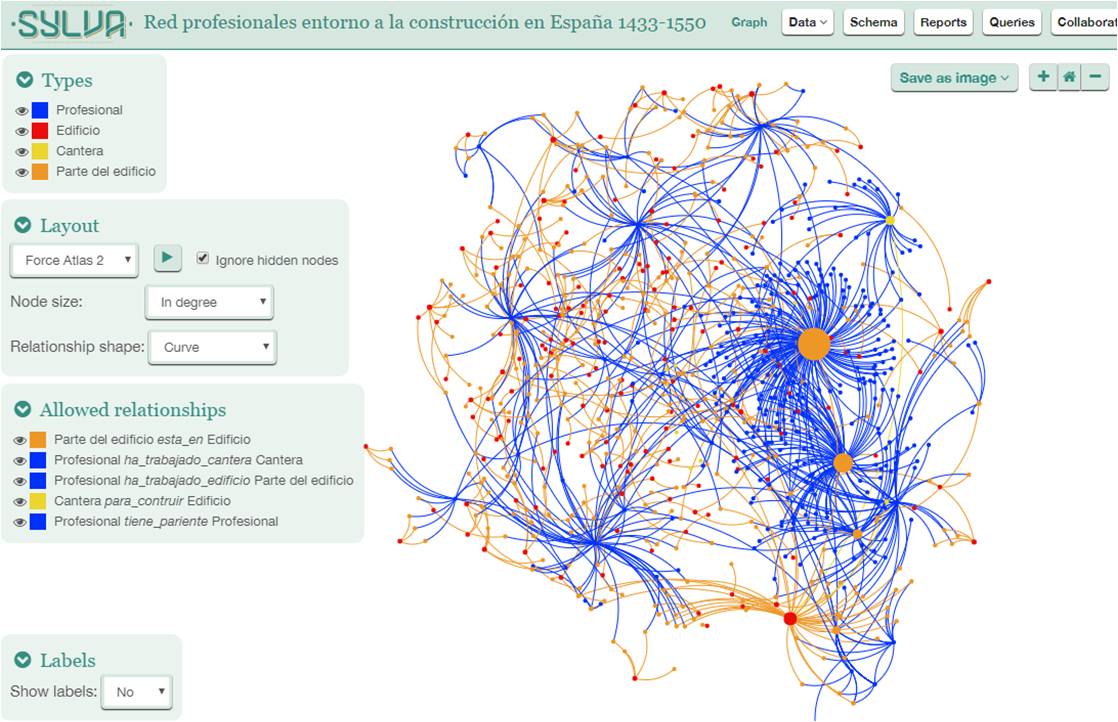 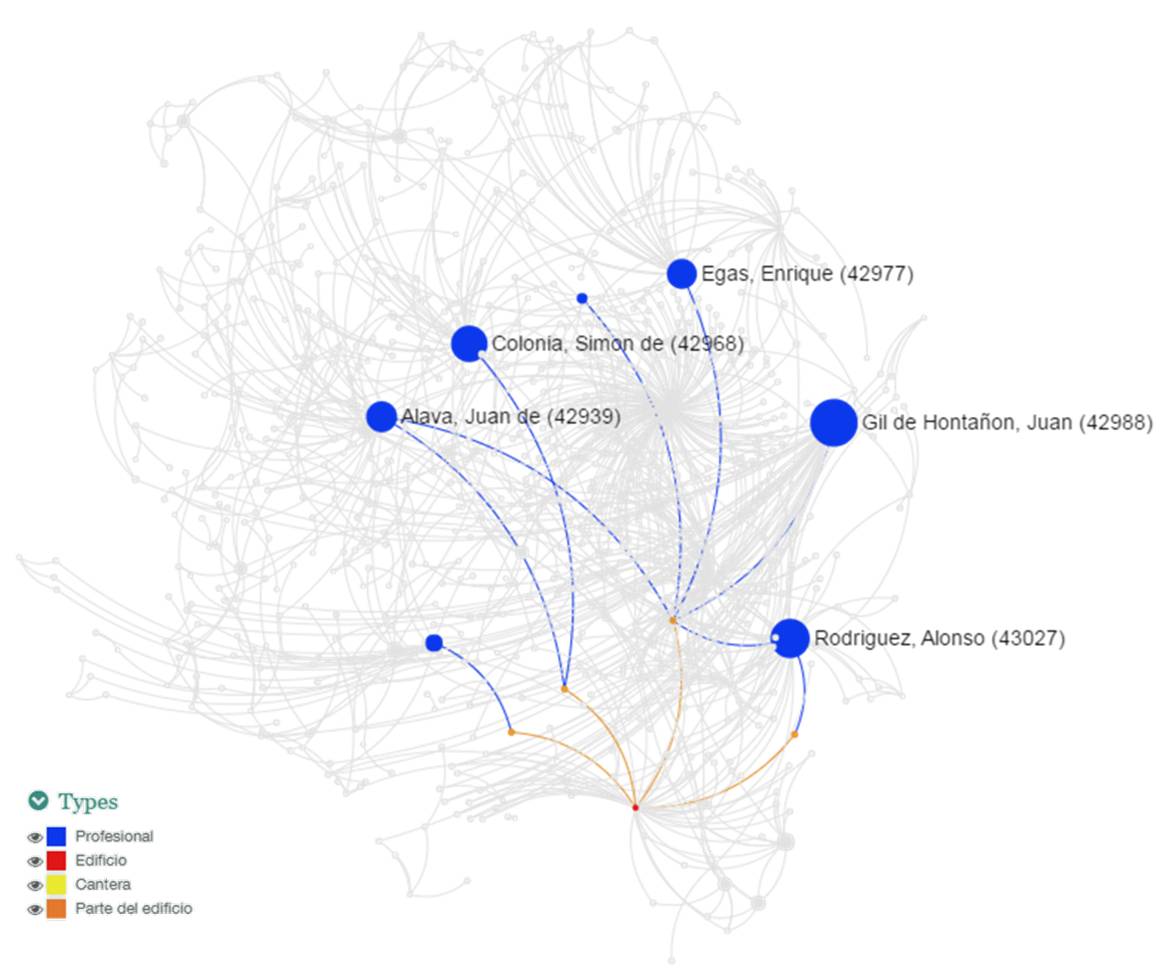 Figure 4: This graph shows the masters builders who had worked in different activities concerning to the cimbor of the Cathedral of Seville 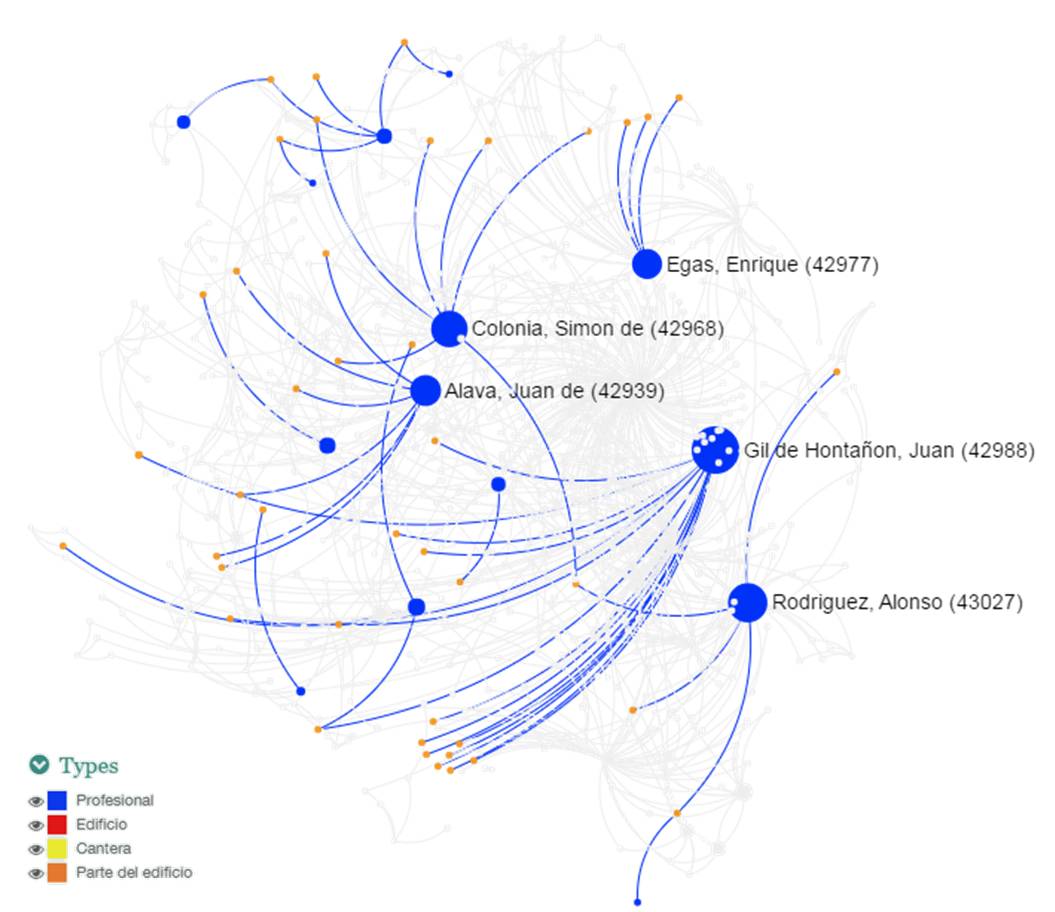 Figure 4: This graph shows the masters builders who had worked in some chapels 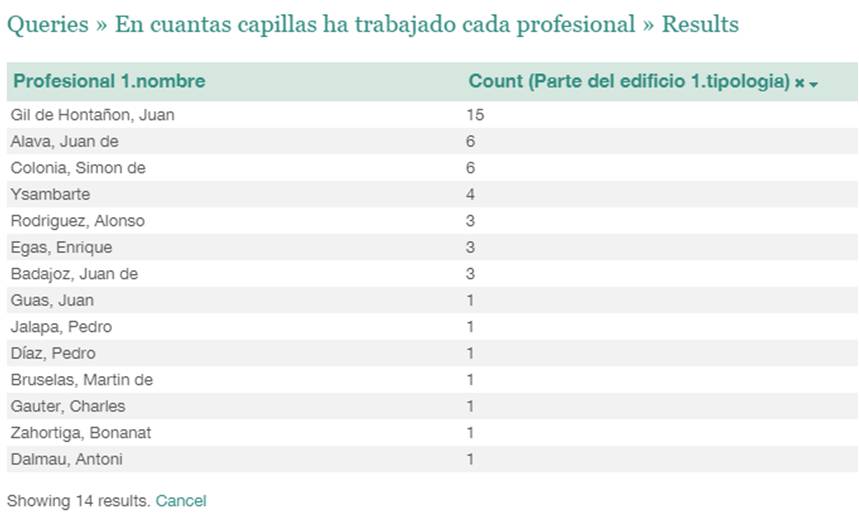 Table 1: This table shows the professionals who worked in different chapels. We can see the importance of some of them - the ones who more chapels worked in

Different research methods based on new technologies applied to understanding the same phenomenon provide a greater depth of the problem. In this sense, the use of multiple methods has allowed us to achieve three important aspects: to promote different perspectives on the subject allowing a wider view about the object of study; include a large variety of variables in the study; provide multiple analyses of the same concept, which increases the validity of the research that remains open and upgradeable. Therefore, what we seek is to provide new methods but also new approaches that do not override other traditional systems, but enrich the discussion on the past and its relationship with the inheritance.

This project is associated with the project and R+D+I (Research, Development and Innovation) “A Digital Information Model for the Knowledge and Management of Immovable Cultural Heritage” funded by the Spanish Ministry of Economy and Competitiveness and led by the lecturer Francisco Pinto Puerto.