All in the Family: Testing Burrows’ Delta on Robert Louis Stevenson’s Collaboratively Authored Volumes The Dynamiter and The Wrecker

Robert Louis Stevenson (1850-1894) is known to have co-authored several of his works, including The Dynamiter (1885), on which he collaborated with his wife Fanny van der Grift Stevenson (Stevenson and Stevenson 1885). Until recently, Stevenson scholars had comparatively little information about how the collaboration around The Dynamiter had operated, with one narrative claiming prominence: the preface to the 1905 edition written by Fanny (after her husband’s death) which stated that she had invented the stories during an illness of his, and they had subsequently worked collaboratively to put them into written form (Stevenson 1905).

In this paper, we take insights gleaned from our previous work on the authorship of The Dynamiter (carried out with collaborators Mingyuan Chen, Carlos Fonseca, Laura McAleese, Alba Morollón Díaz-Faes and Elizabeth Nicholas) to investigate another text, The Wrecker (1892). (At the time of submitting this abstract, the authorship analysis of The Wrecker had not yet been carried out, so we have supplied details about our previous study so as to demonstrate that the methods used are both appropriate and robust.) We used the R package Stylo (Eder et al. 2015) to apply Burrows’ Delta (Burrows 2002) to two reference corpora containing works known to have been solely authored by Fanny or Robert Louis, and used these as comparators against the individual stories in The Dynamiter. 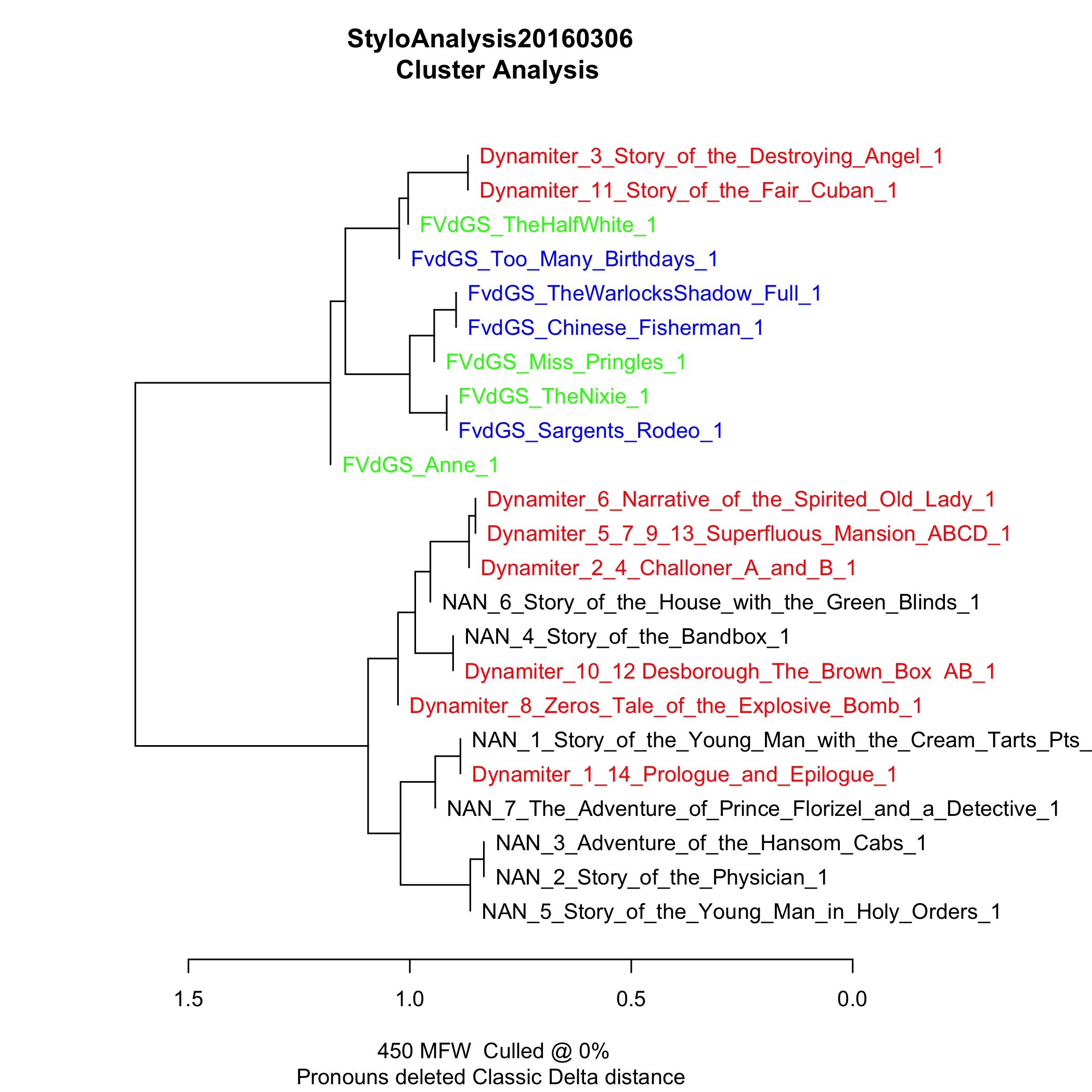 Fig. 1. Cluster analysis of Burrows’ Delta scores of the 450 most frequent words in texts by Fanny, in green and blue, by Robert Louis, in orange and black, and The Dynamiter, in red (pronouns deleted, no culling).

Our interpretation of these results was that the stories Fanny was most likely to have authored from The Dynamiter were “The Story of the Destroying Angel” and “The Fair Cuban”. However, it is important to note that while Fanny may well have had an originating role for the plot of many, if not all, of the stories – something which the Preface to the 1905 edition seeks to establish – when it came to the actual writing down of the stories, the “signal” from her linguistic signature was made less clear by the “noise” of her husband’s heavy editorial hand (something which is known from biographical and historical writings about their relationship).

Building on this earlier work on The Dynamiter, the paper we propose here will examine another work co-authored by Stevenson: The Wrecker, also a volume of short stories, which Stevenson co-authored with his stepson Lloyd Osbourne. Stylo will again be used, as will insights from the many Dynamiter tests. These indicated, for instance, that deleting pronouns resulted in better separation of texts in the reference corpus, something we attributed to Stevenson’s tendency to write about predominantly male characters, which resulted in the prevalence of male pronouns. With the experience gained from attempting to find a solution to the “signal” vs. “noise” problem caused by Robert Louis’s proclivity to edit the work of his collaborators, we will also investigate how changes to additional parameters offered by Stylo – changes to the number of most frequent words considered, for example, and variations in text sample size – affect the results of the Wrecker tests.

As mentioned above, our earlier results suggested that Robert Louis’s editing practices – he had a tendency to edit texts meticulously prior to publication – makes it hard to determine with certainty which sections were written, or initially drafted, by Fanny. A model of co-authorship in which the boundaries between one author and another are clear-cut – where the assumption is that one person is solely responsible for some sections and a second person is solely responsible for others – breaks down in a situation such as this, where the shared domestic space of two authors means that close consultation with – and iterative redrafting of the work of – one’s familial collaborator is not simply possible but likely. It underlines the need for stylometric analysis to be complemented with careful literary historical analysis in order to arrive at any meaningful conclusions.

The broader significance of this work is that it is not only of relevance for the field of authorship attribution, but also for its recuperative potential in relation to figures who are less prominent within literary history, including women. Despite scholars' awareness of Fanny’s involvement with her husband's writing, for instance, there is still minimal research into how she influenced his work, and how other women in similar positions influenced their famous husbands' legacies. In bringing to light the omitted literary contributions from women and other family members, what emerges is the need for theoretical approaches capable of evaluating the gendered practices of literary studies and book history in contributing to these omissions. In analysing letters and journals, combing through stylometric data, and assessing biographical accounts, there is a risk of overlooking collaborations in favour of other types of partnerships (amanuenses, muses, and the like). A woman like Fanny van der Grift, who history has recorded as a keen writer, diarist, and editor, surpasses the labels that book history has offered her. While authorship attribution analysis offers one set of useful tools for breaking down these barriers, further critical engagement with our own gendered scholarly practices is necessary to more clearly understand how and why certain works and canons have become established in the way that they have.