In historical statements, we face narrations that are vague in sense of persons, places, times, and events. This means that we have uncertainties and non-specificities about the persons and the events, and the time and place the event has taken place. These uncertainties are mostly caused by ignorance about the characters and events assignments, and definition of the boundaries narrowing down the time and space frames. Moreover, we have narrations that usually do not uphold each other, and have different validities or certainties. Putting these contradictory narrations together to judge about the most definite event needs a great effort, and is a hard task for unaided human mind.

To reach this goal, we divide the problem to three main domains, and simplify the question to minimize the efforts and implementation cost of each step.

In this step, using Natural Language Processing tools, we form [multiresolution] verb clusters that help us define the same events that have meanings in common. For example, killing, shooting down, hanging, and choking can be considered as different ways to end one’s life, and we may put them in one cluster. These clusters are extracted from WordNet (Hirst and St-Onge, 1998), and define the degree to which we may merge events based on their verbs (Meng et al., 2013).

The main role of the reasoning engine is to combine different evidences to calculate the probability of a hypothesis. To do so, one can use the very familiar Bayesian inference method to incorporate different evidences using the Bayes theorem. However, this modeling cannot deal with non- specificities. For instance, if we have four persons A, B, C, and D as candidates of an assassination, we may assign probabilities to Assassins = {A,B,C,D} or other probabilities to subsets of the Assassins set. However, if we do not have crisp evidences defining the probabilities of each member we are unable to do inference where the subsets overlap. As a result, we cannot use the Bayes rule to combine evidences of Pr(A or B or C) and Pr(B or C or D) if we do not know Pr(B or C)or assume some other hypothesis for it.

On the other hand, there is a great advantage in using the Dempster-Shafer Theory of Evidence (DST) compared to the classical probabilistic reasoning based on the Bayesian Theory (BT). By DST, it’s possible to take non-specificity into account as well as randomness, which was not possible in BT. In many problems, such as reasoning based on non-specific statements (which are modeled here as narrations), accumulated non-specificity (vagueness) may reveal more specific details. This is the main reason to use DST instead of BT.

It means that when each narration determines a non-specific time and place for an event, or these space-time pieces overlap each other, we are able to define precisely the most and least probabilities that the event has taken place in a specific portions of space-time. These probabilities are usually mentioned as lower and upper bounds of probability, and may be interpreted as Belief and Plausibility respectively (Zadeh, 1986).

We used the CRMgeo model (Doerr and Hiebel 2013) that is standardized in ISO 21127:2014 as the space-time model. We have incorporated GIS tools (as done in Hirschfield and Bowers, 2001; and Fuhrmann et al., 2013) and standard ISO 8601:2004 to model space and time respectively. However, due to the rich and flexible ontology design of the CRMgeo model (Doerr and Hiebel, 2013) which is standardized in ISO 21127:2014, we switched to it as our main space-time model. We also benefited from the CRMinf argumentation model (Doerr 2015) to model the narrations.

At last, we implemented different evidence combination rules in R language to combine the structured narrations together, resulting in and reduced ambiguity and vagueness (Kohlas and Monney n.d., Barnett 1991)

4. An Example of a Toy Problem

The following figures are the output results of a reasoning over a toy problem of an airplane crash in different boroughs of London, and is plotted for each of the years in the 1930-1935 timeframe. Each plot is for a specific time (e.g. X1930 is for the year 1930). The values of the average probability of the crash in each borough are represented in decibels to better visualize the slight changes of probability in similar regions.

The problem is to combine the following five narrations to gether. The numbers in the parentheses are the validities and/or confidence of the statements.

4. It's hard to remember (60%), but my father once told me (90%) that he witnessed an airplane crash in the center of London, Old London. 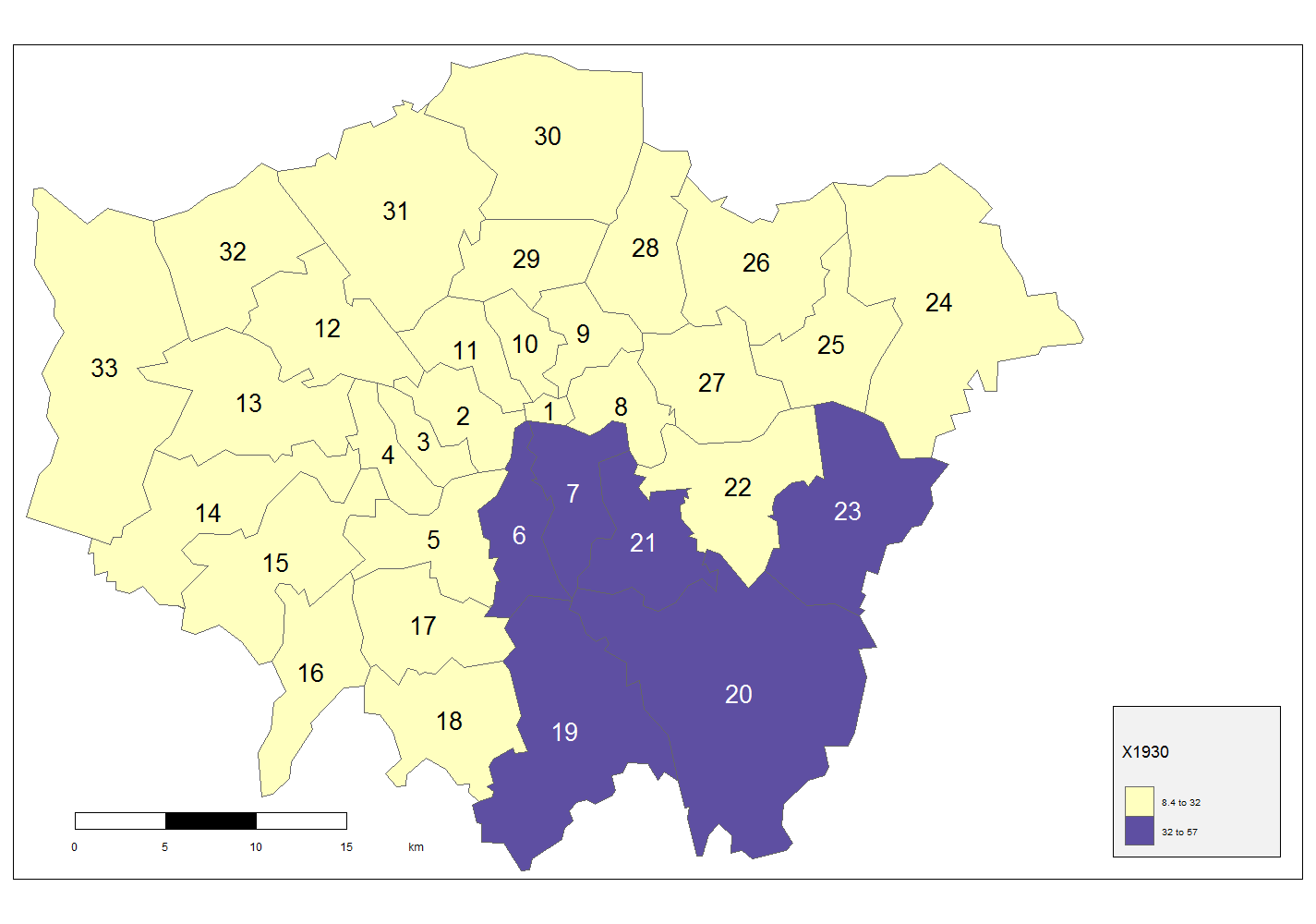 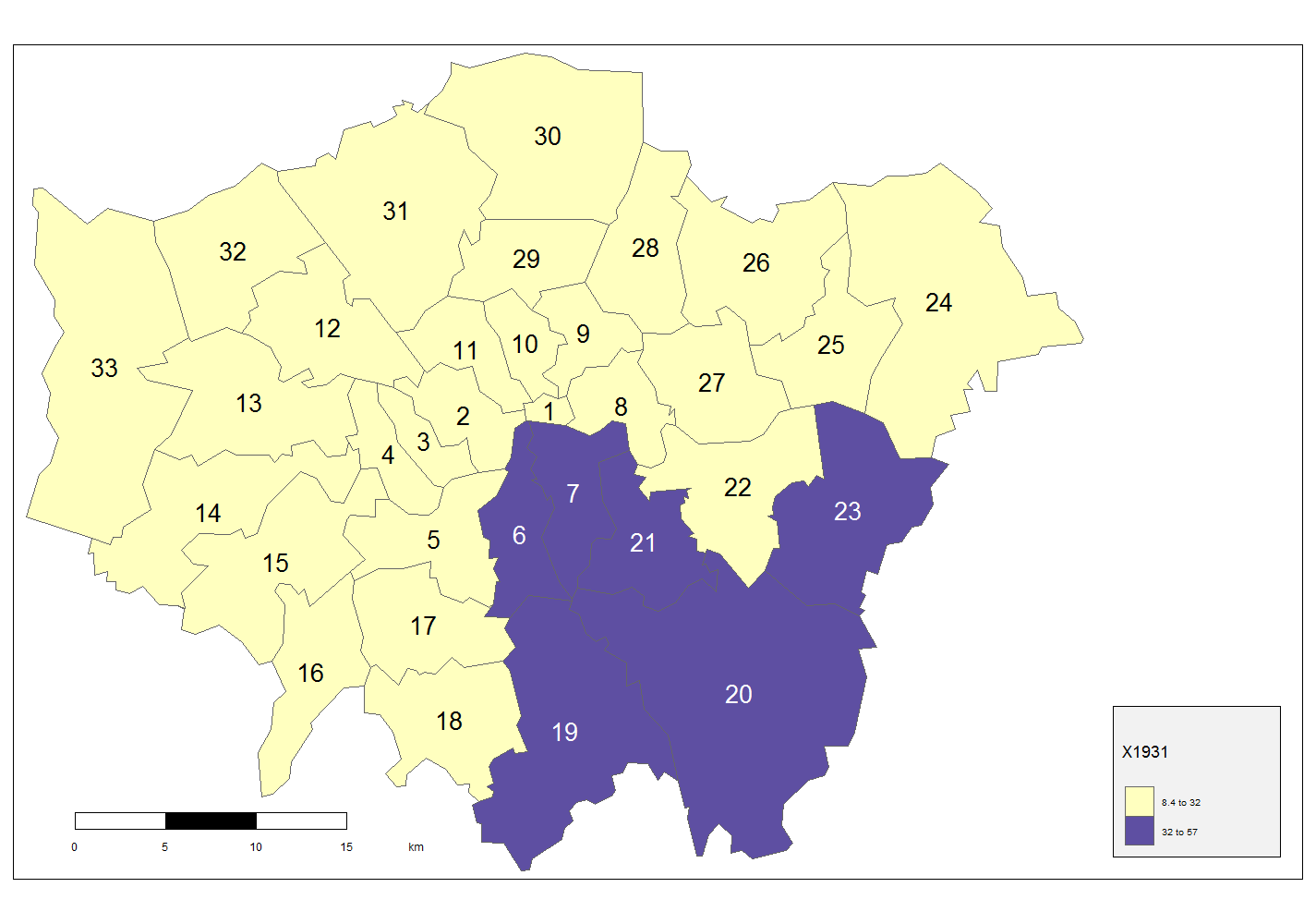 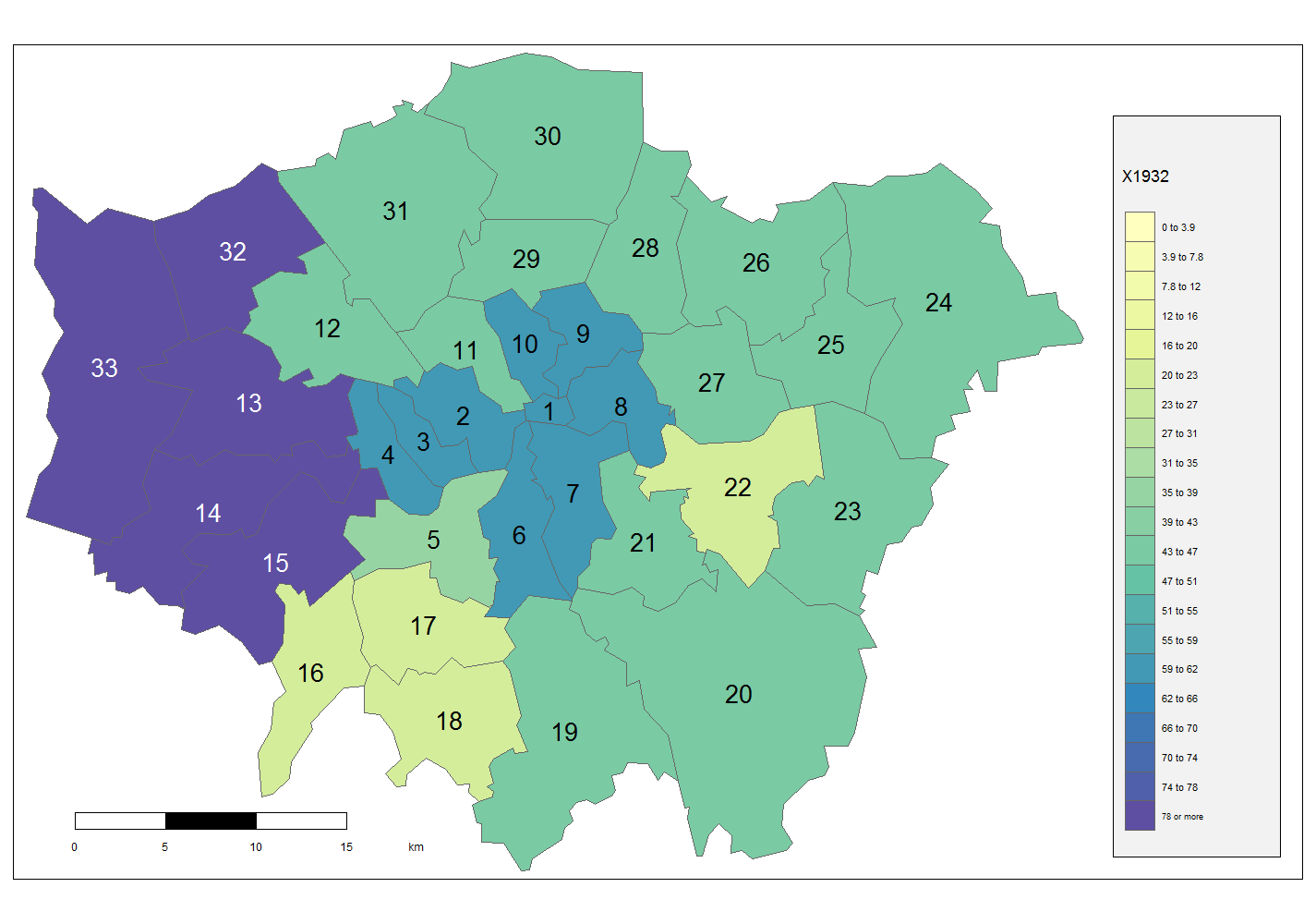 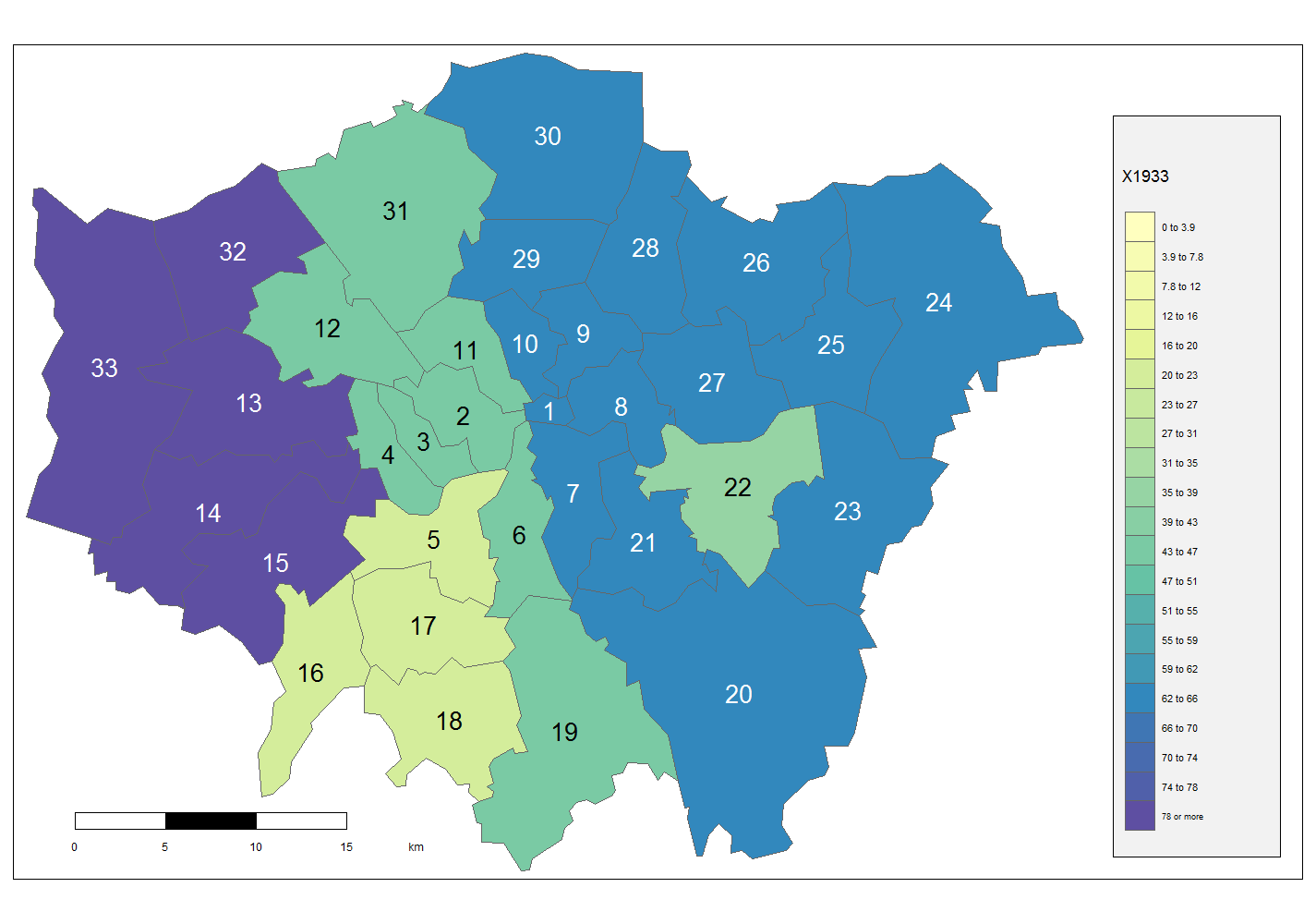 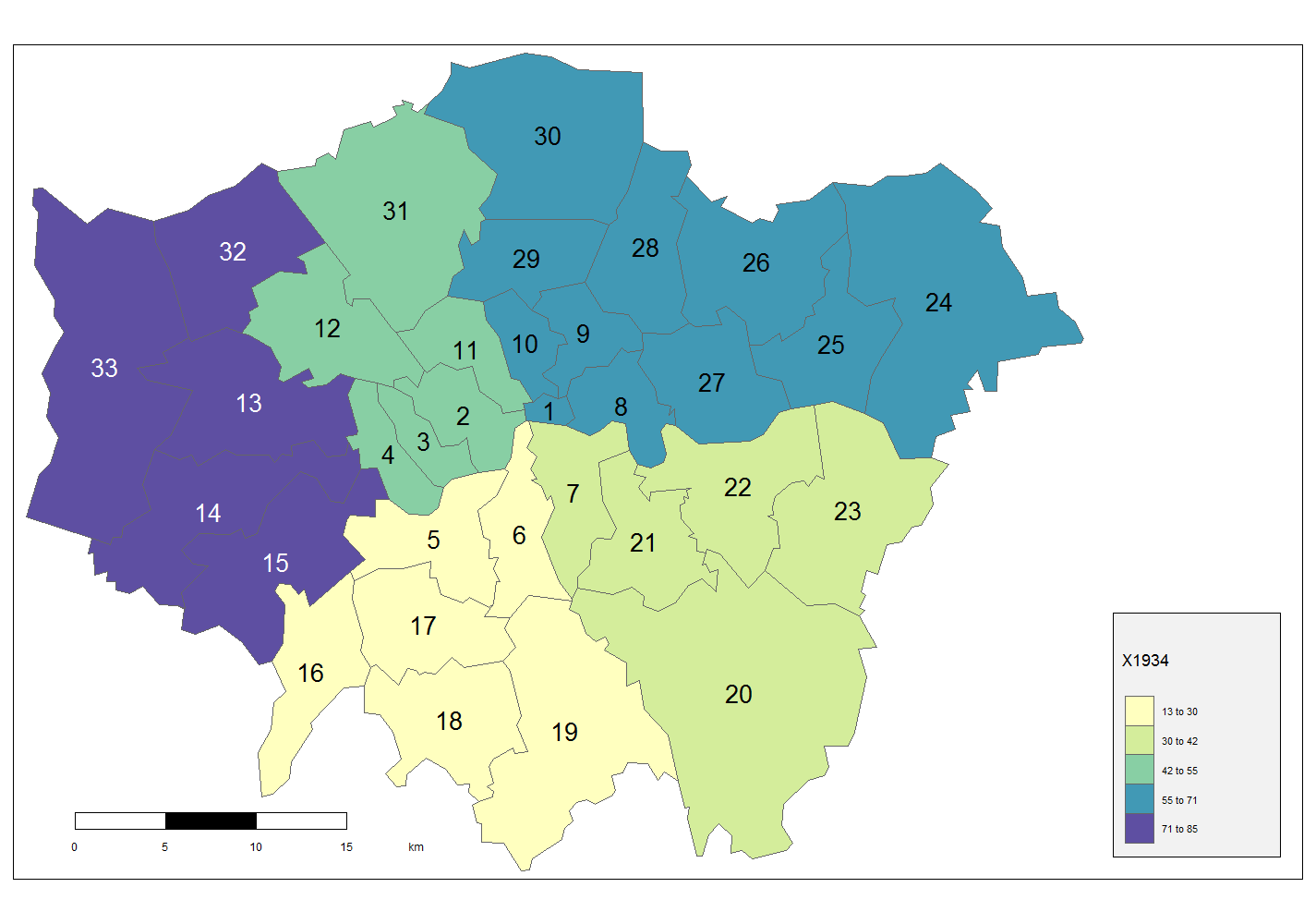 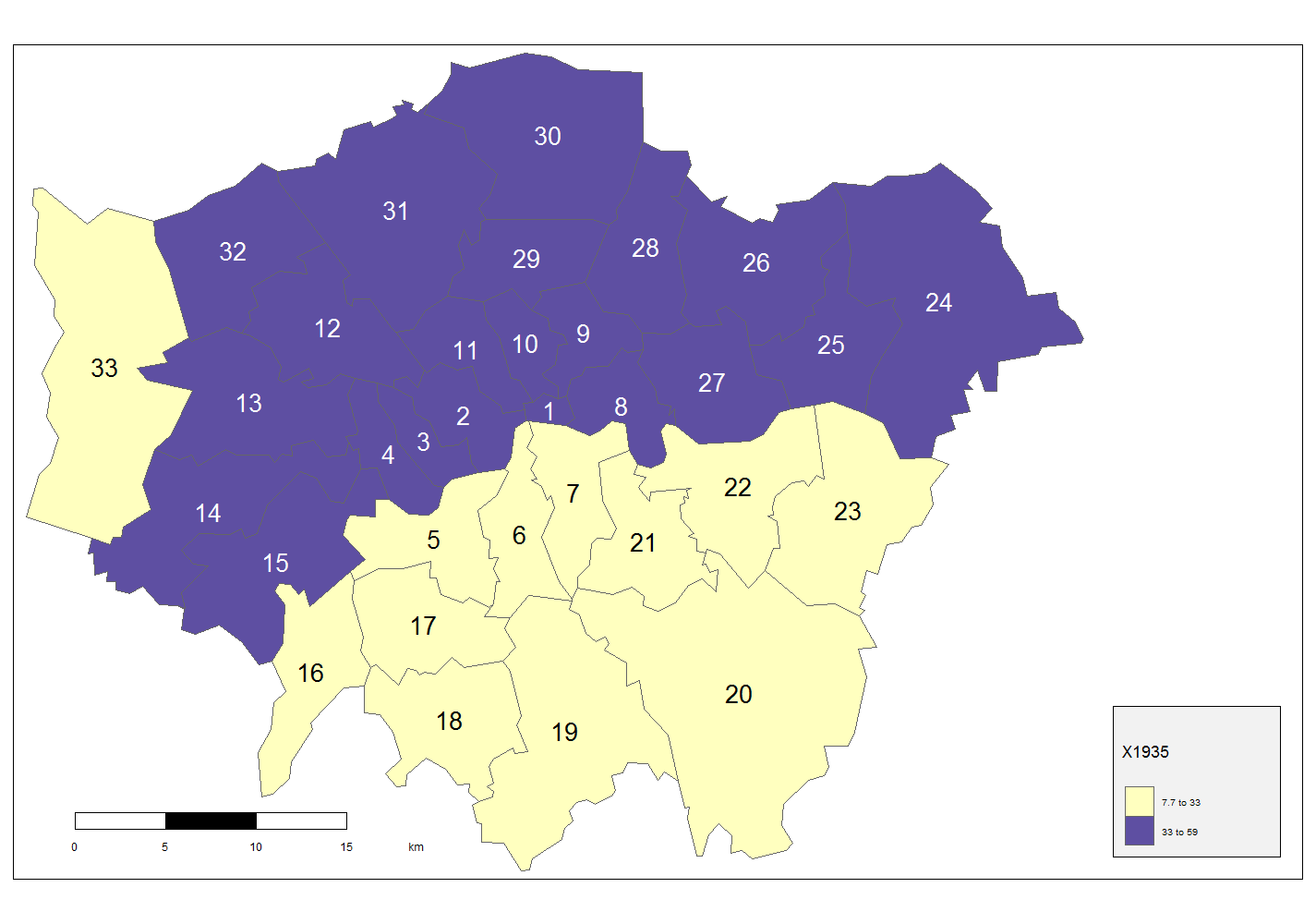 5. About the Project Name