This paper adopts a social-deterministic view of intellectual history in order to link changes in social and professional interactions to the intellectual character of a community. The formation of Australia’s economic history community between 1950 and 1970 is used to illuminate the link between these social and intellectual forces. The economic history field globally has experienced a number of changes over the twentieth century, and although some of these aspects are understood for the larger communities in the US and the UK (see Hudson, 2001; Lyons et al., 2008 for recent examples), Australia’s economic history field remains neglected. Social connections within the community were driven by contextual factors such as the post-WWII expansion of higher education, the growing emphasis on research output and the development of domestic PhD programs. These connections then developed in a multi-dimensional way throughout the 1950s and 1960s, with co-location and collaborative relationships emerging simultaneously between individuals. It is found that the increased density and multiplexity of ties in the community contributed to the development of a distinctive intellectual approach.

This project combines the quantitative analysis of social and intellectual relationships between members of the field with the qualitative analysis of published works of economic history in this period. Though there is a long tradition of emphasising the importance of social interactions for the development of ideas (Kuhn, [1962] 1970; Mulkay et al., 1975; Whitley, 1984), there have been only limited attempts to visualise social relationships in intellectual history (for some examples, see Harvard University, 2015; Shakeosphere, 2015; Six Degrees of Francis Bacon, 2015), and even fewer attempts to relate changes in the social structure to changes in the intellectual character of the group.

This project links the social and knowledge networks for this community. The social network has been visualised through co-location and collaboration networks. The knowledge network has been visualised through citation analysis and is discussed further through the qualitative analysis of texts. The collaboration and citation analyses are based on a selection of key texts of Australian economic history for the period 1950 to 1970. Texts have been selected from prior wide reading of the subject, with further guidance from secondary analyses that focus on the literary aspects of the field. This has determined the key ideas, approaches and debates for this community, which has informed the selection of texts.

Based on these texts, collaboration for this community has been recorded in three ways: co-authorship, contributions to edited works, and sub-authorship (acknowledgments). These networks are bonded-tie and valued, based on the number of separate texts that each pair of individuals collaborated on. Collaboration in this context represents ongoing, two-way interaction and the trading of theoretical insights and ideas (Laudel, 2002; Wang et al., 2014). Co-location has been used to map geographic proximity between two individuals, assuming that if they worked within the same university or faculty, they were more likely to have contact than those who were geographically disparate (Jaffe et al., 1993; Ponds et al., 2007). This network is also bonded-tie and valued: if two people were both employed by the same university for 2 years, their relationship is given a score of 2, and so on.

From the raw collaboration and co-location data, a network of key actors in the community has been determined to allow the combination of the different social networks. All authors of key texts and key collaborative works are included. Otherwise actors are included if they were involved in more than one type of social interaction in this community, for example if an individual was appointed to one of the key universities in this period, as well as involved in the sub-authorship network. From this, each social network map has been weighted based on the strength of that particular relationship. Co-location has been weighted by 0.5, because although geographic proximity may induce interaction between scholars, there is no guarantee. Sub-authorship and contributions to edited works are weighted by 2, and co-authorship is weighted by 4.

The knowledge network has been partially analysed through citations, as these represent the ideas that are shared between different authors and the place of a text in the wider context of the field (Leydesdorff and Amsterdamska, 1990; Newman, 2010; Siler, 2013). The citation network for this project has been coded manually, as texts are generally non-digitised books and articles – features that make the use of the Social Sciences Citation Index (SSCI) inappropriate here. This network is directed, indicating the one-way transfer of ideas, and is valued for the number of times in each text that the citation is made.

Supplementing the quantitative analysis of social and intellectual relationships is a qualitative component. The key texts in this community, as identified above, have been analysed using Lloyd’s (1995) framework, which classifies works of economic history based upon the author’s assumptions about how the economy operates (ontology) and the author’s methodology for gaining knowledge about the economy (epistemology). By analysing both qualitative and quantitative aspects, this methodology is able to link social and intellectual interactions with the ideas that emerge in the author’s texts. 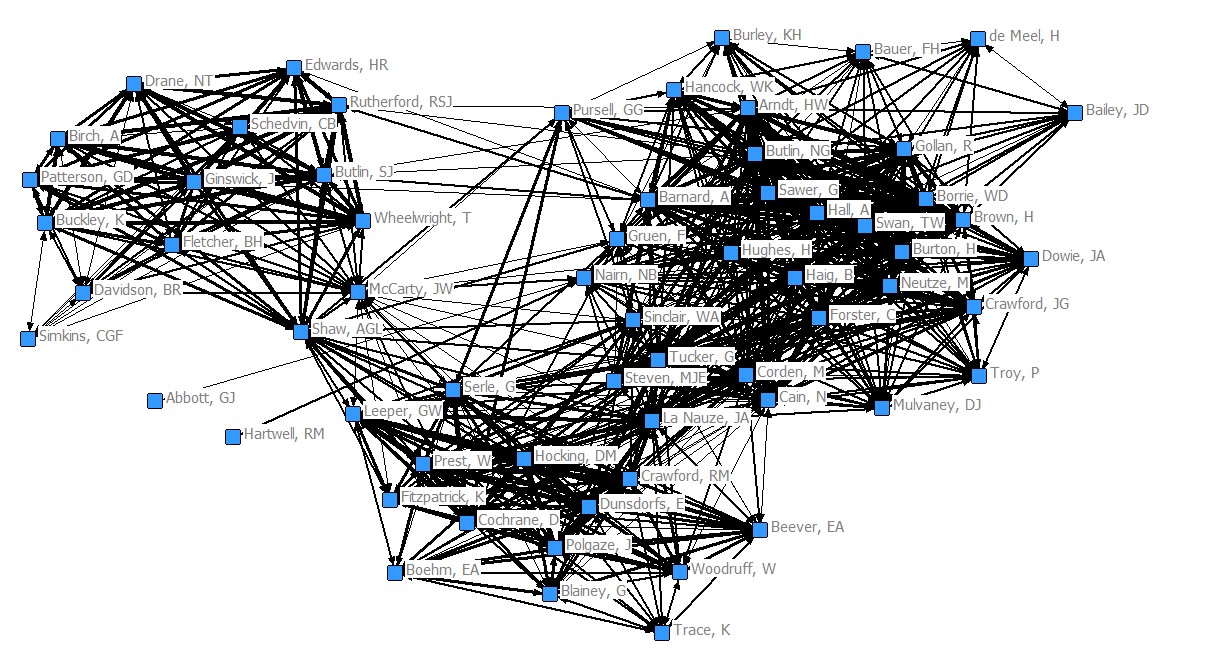 Collaboration was less geographically determined, though there was still greater interaction between those working at the same site. All co-authors were those who also had co-location ties (see figure 2). Contributors to edited works were also generally those that were geographically proximate to the editors in this period (see figure 3). Sub-authorship was the least geographically determined social network, responsible for most of the interactions between those in different cities (see figure 4). Having said that, the sub-authorship network was still clustered around the main institutions, with the ANU group experiencing the greatest frequency of sub-authorship in this period. Figure 5 shows that when each of these measures are combined, social interactions between members of the community in this period broadly followed co-location trends. 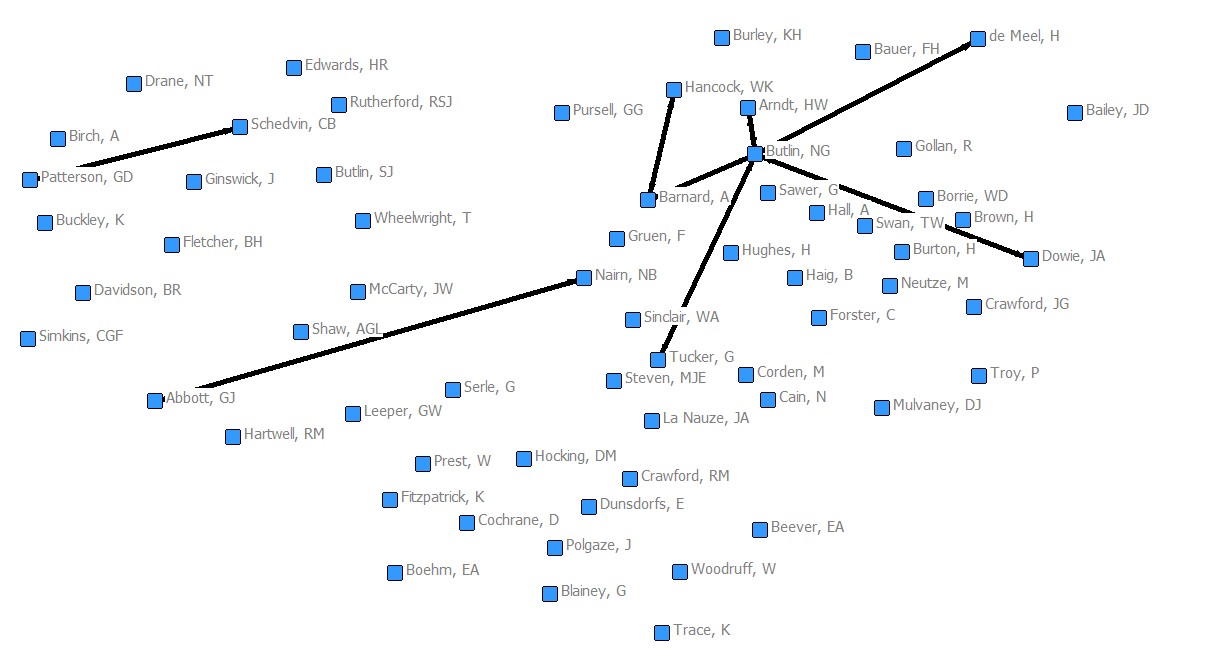 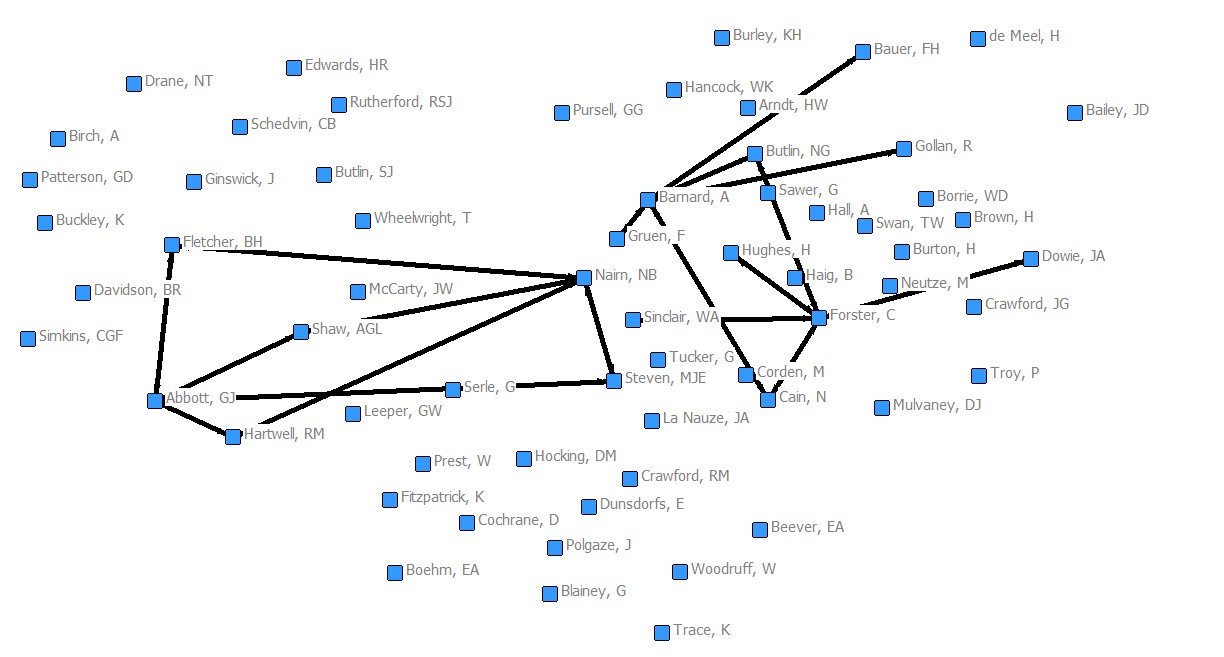 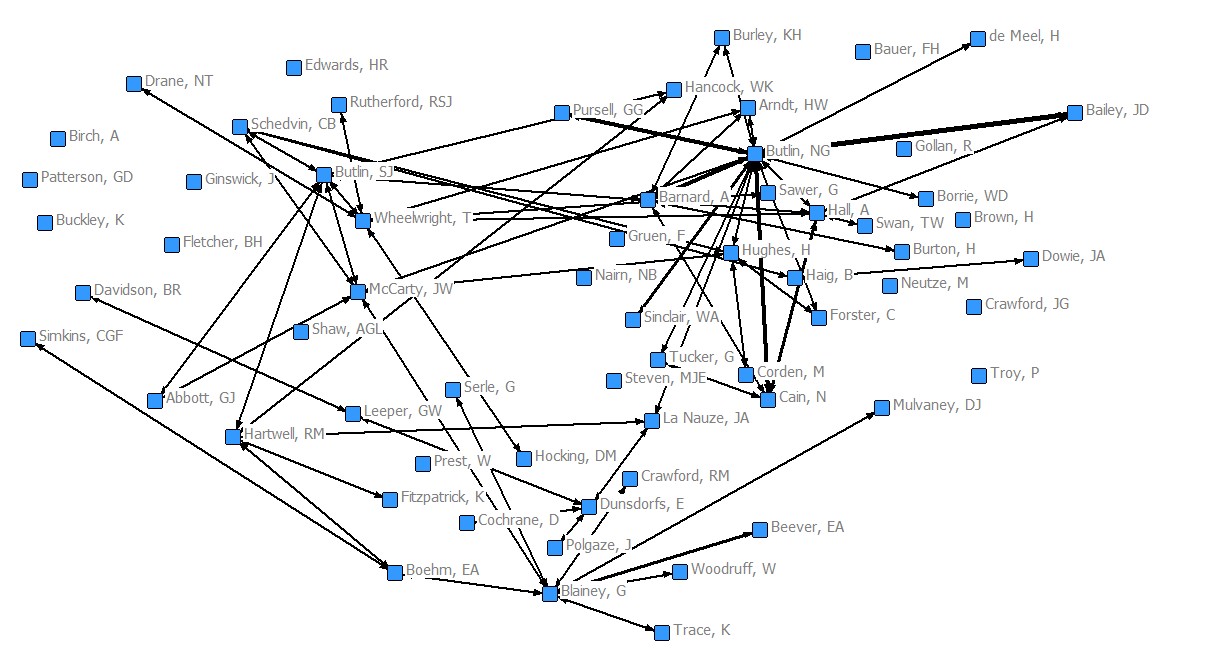 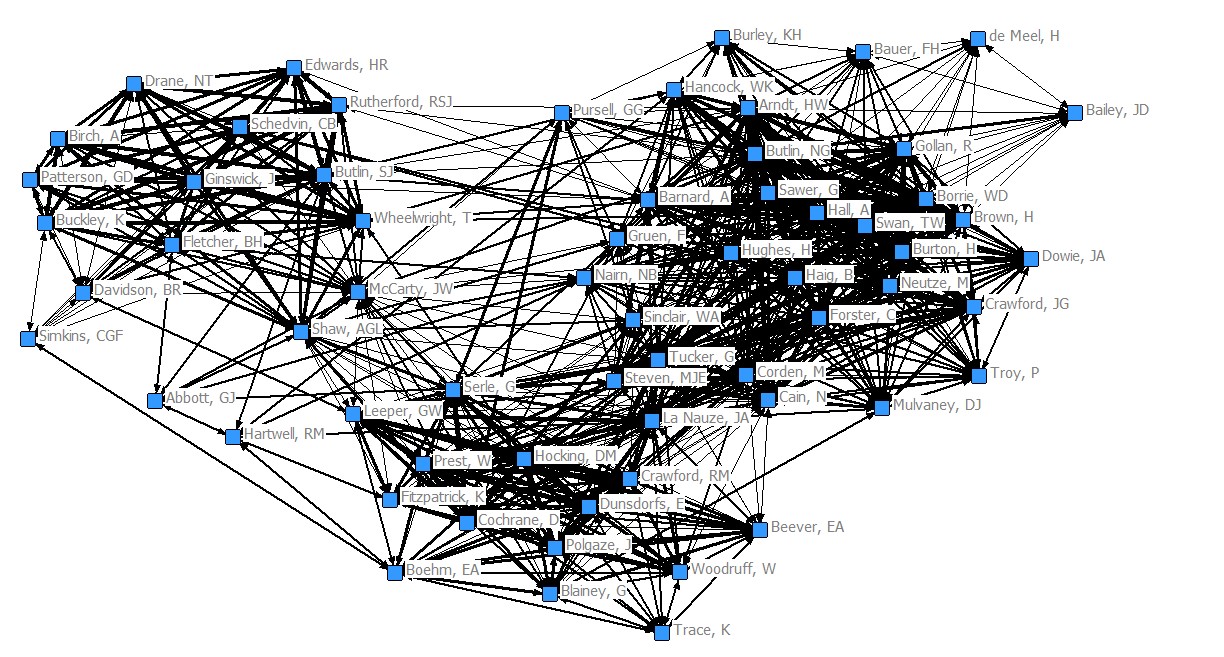 Figure 6 shows the citation network for this community, with authors of those texts included in the citation analysis highlighted. There was a broad tendency for those that had strong interactions in the social network to have similar citation patterns. A good example of this is NG Butlin, WA Sinclair, N Cain and AR Hall, located together towards the centre of figure 6. In the social network, these individuals were part of the large ANU cluster, with co-location and collaboration interactions throughout this period. There is evidence to support the counterfactual as well: that a lack of social interactions with the core of the community led to distinctive citation patterns. BR Davidson and E Dunsdorfs are good examples here, located on the fringes of figure 6 below, and also with limited interaction in the social networks above. However, this is a loose relationship, with non-social factors such as choice of research topic and approach to the subject also converging citation patterns. 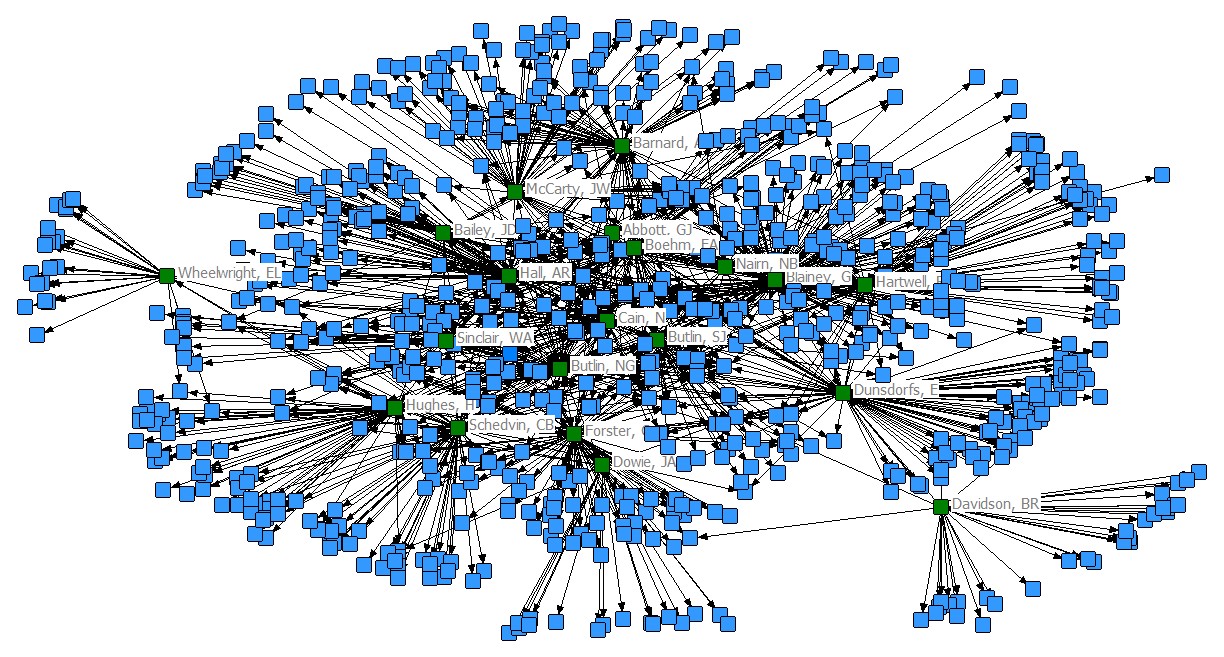 The networks above show that there was a range of social and intellectual interactions in Australia’s economic history field between 1950 and 1970, particularly structured around key institutions and prominent figures. This was accompanied by the development of a distinctive intellectual approach for the community. The orthodox approach to economic history in this period focussed on national income accounting, domestic determinants of growth, urbanisation, and the treatment of economic agents in an abstract and aggregate way. Core proponents of this approach had multidimensional interactions in the social network, mostly centred on NG Butlin and his colleagues at the ANU. A number of alternative approaches existed in smaller ‘pockets’ in the community, which were also structured by social interactions.

By combining the quantitative analysis of various social and intellectual relationships with the qualitative analysis of texts and ideas, this project links the social network and the knowledge network for Australia’s economic history community. Not only does this provide a pioneering attempt to combine SNA with the more traditional methods for intellectual history, it analyses the Australian economic history field in a dynamic and multi-dimensional way. Key results suggest an association between social interactions and the citation patterns adopted by members of the community in this period. Key social and intellectual relationships between members of the field also led to the development of a distinctive intellectual approach for this interdisciplinary field.