This is an extension of our previous work in which a longitudinal (1989-2014) co-citation analysis of literature in Digital Humanities was (DH) conducted to explore the degree of interdisciplinarity in DH. The selection of the literature was based on a combination of keyword search with Scopus and articles published in the key journals in the field (i.e. journals published by members of ADHO). A dual trend of gradual increases in both topical diversity and network cohesion, two hallmarks of interdisciplinarity (Porter et.al., 2007; Rafols and Meyer 2010), were found in the co-citation network. For example, as shown in Figure 1, the average path length remained steady relative to the gradual increase of the network diameter, which suggests continuing growth of the literature and its gradual consolidation (the sharp rise at the tail being the artifact of citation window). On the other hand, the growing diversity was demonstrated by the steady increase of distinct author-assigned keywords over time. 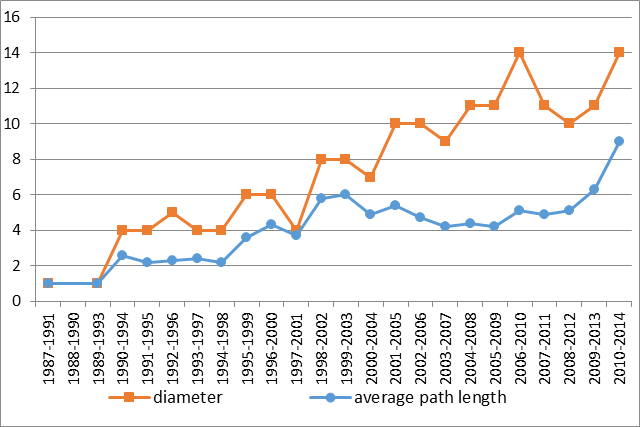 In this article, the results of further analyses were reported that aimed to, firstly, further explore of the issue of disciplinary cohesion using co-authorship and bibliographic coupling networks; and secondly, to identify cohesive subgroups or specialties in the DH literature.

Based on the assumption that the knowledge integration process in research communities depends heavily on the topology of the underlying social network, Moody used the structure of collaborative (i.e. co-authorship) network to represent the integration of knowledge in Sociology over time (Moody, 2004). The concept of “structure cohesion” or “connectivity” in network analysis was used to measure the degree of social cohesion in Sociology, which is defined as “the extent to which a network will remain connected when nodes are removed from the network (Moody and White, 2003).” Moody (2004) discussed three types of network structures: star production, small world, and structurally cohesive and surmised on the corresponding collaborative practices each represents. Moody (2004) believe that a cohesive collaboration network signals the presence of “permeable theoretical boundaries and generic methods” that allows scholars specialized in particular theoretical, empirical or theoretical skills to collaborate freely. He added that, if enough scholars engage in this kind of cross-fertilization, mixing across multiple areas, there will be few clear divisions presented in the collaborative network (Moody, 2004). Similarly, Carolan (2008) used network structure of articles published by a leading journal in Education to examine how well the heterogeneous set of ideas and practices were integrated within the discipline.

As shown in Figure 2, contrary to the co-citation network, the DH co-authorship network is very sparse and highly fragmented. The percentage of the nodes in the main component hovered only below 20% even after discounting the isolates, which is extremely low compared to other disciplines or research areas (See Table 1). Notice the contrast is especially striking with sciences, medicine, and IT. The low percentage of nodes in main component (Figure 2), coupled with extremely high clustering coefficient and modularity (Figure 3), indicated most collaboration took place at the local level, lacking global “shortcuts” found in the small-world model to hold the network together (See Figure 4).

Figure 2. Percentage of nodes in the main component in the co-authorship network

Figure 3. Trends of clustering coefficient and modularity in co-authorship 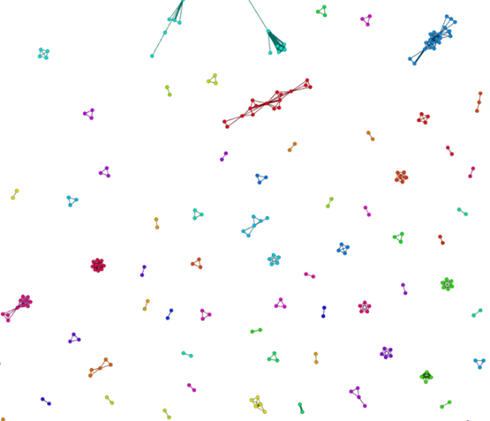 Figure 4. Part of the co-authorship network

The identification of specialties in DH

Modularity maximization graph partition was applied to both the co-citation and bibliographic coupling networks to identify subgroups or specialties in DH. Both co-citation and bibliographic coupling have been widely used to establish similarity or linkages between documents in bibliometrics (See, for example, Yan and Ding, 2012; Boyack and Klavans, 2010).

The co-citation network was construed by using Google Scholar’s citation tracing function. The citations received by every article in our target set were first identified and downloaded then pair-wise matching was performed to identify shared citations. The bibliographic coupling was generated by pair-wise comparison of cited references retrieved from Scopus. A threshold of shared 3 citations in the reference lists was set to dichotomize the network. Figure 5 and 6 show the results of the modularity-based partition resulted from co-citation and bibliographic coupling networks, respectively. Due to the lack of global cohesion, only the giant component in either network was analyzed. We are currently in the process of identifying the research topics represented by the clusters in either network, which will be done by examining the author-assigned keywords and authors appearing in each cluster. The labeling of the clusters by each’s prominent authors has been shown to be an effective way of visualizing a field (e.g. White and McCain, 1998). Interviews with experts who have broad knowledge in the field of DH will be done in order to help us interpret the meaning of the clusters. Efforts will also be made to explore the reasons behind the lack of cohesion in the DH co-authorship network. 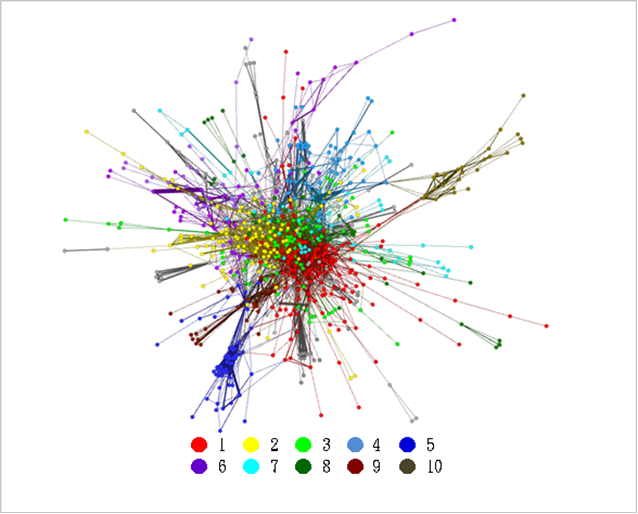 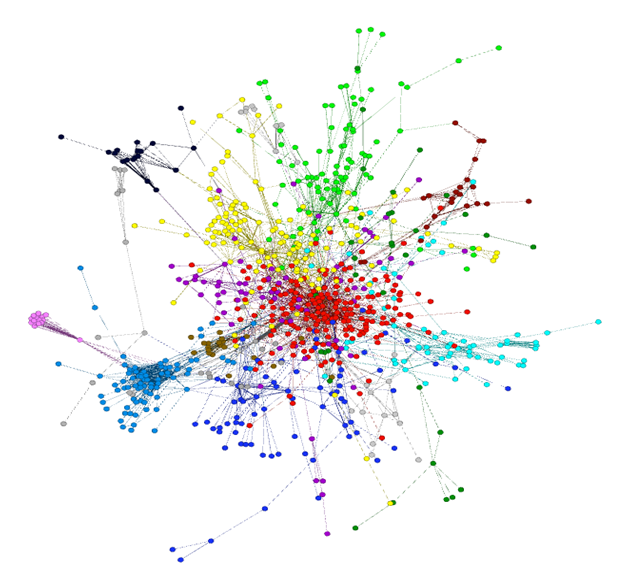