As a teaching experience associated with the Library’s Archives Alive initiative, the project offers opportunities for students from arts, music, computer science, and engineering programs to learn about the collection and develop an exhibition from initial concept to execution, and to do so in collaboration with a diverse set of mentors and collaborators who help them understand the histories and technologies involved, as well as stakes of their presentation choices. As a ongoing archival project, it demonstrates the challenges and opportunities inherent in working out a major library archive and preservation effort alongside a live curricular intervention and planned public exhibition. As a research project, it offers scholars in media studies a firsthand view of how material recording and playback technologies and their affordances help shape subsequent cultural histories, and affect what we can recirculate and share today. Taken together, these strands demonstrate that introducing digital cultural heritage project development as a shared objective enriches student learning, encourages library archiving and preservation projects to consider their public facing dimensions as they construct new resources, and offers digital humanities and media studies scholars meaningful opportunities to collaborate with colleagues in historically minded disciplines around new forms of scholarly production – in this case data-driven exhibitions at the Mountain Music Museum in Western NC, at the Rubenstein Special Collections Library at Duke, and online. 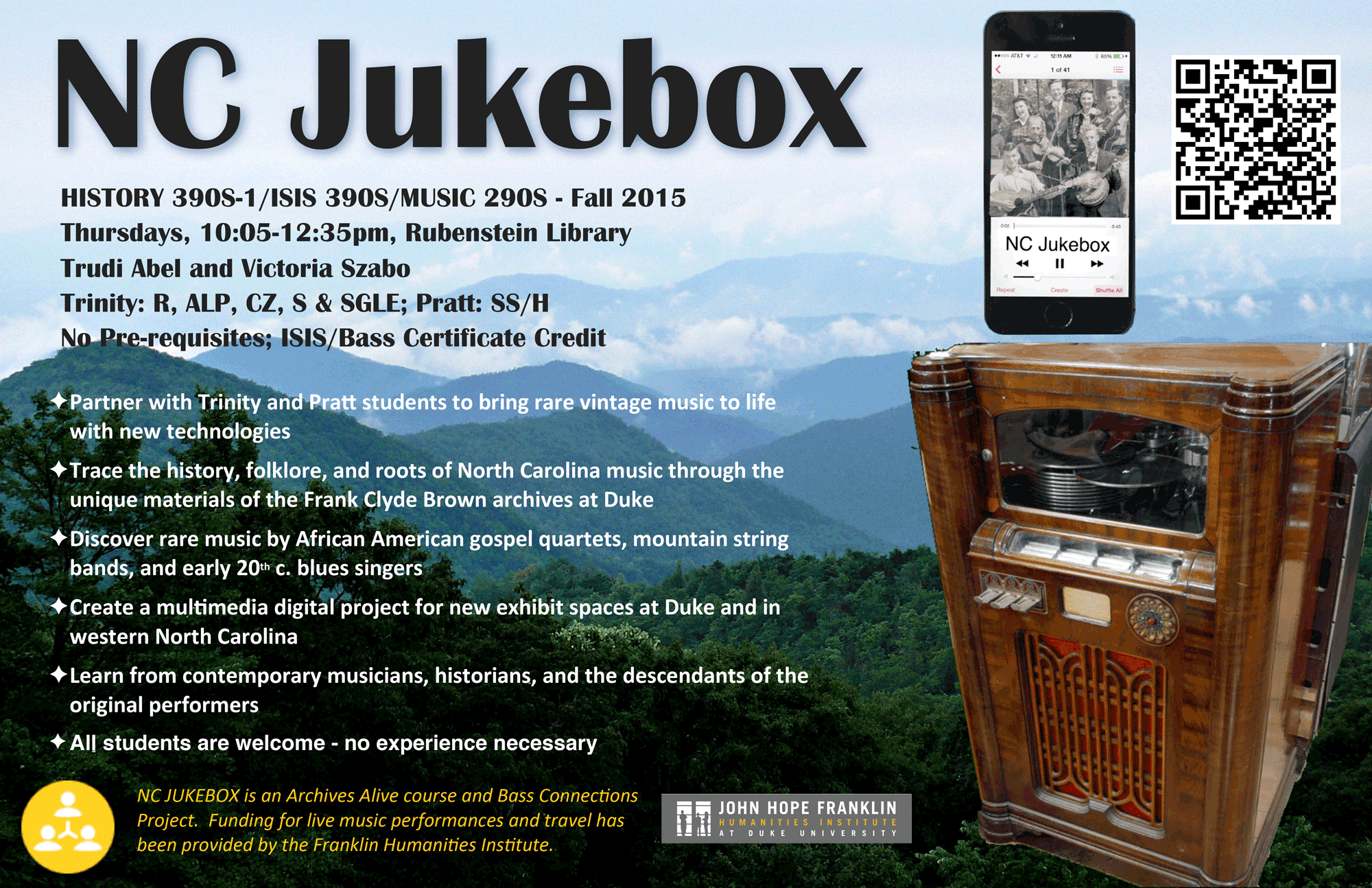 Our project begins with the songcatcher himself. In the 1930s Frank Clyde Brown, Duke Professor of English, and co-organizer of the North Carolina Folklore Society (1913) as Zeke Graves in our Library tells us, began recording and archiving Western North Carolina folk music (Graves, 2015). Following in the tradition of folklorist Alan Lomax, and songcatcher/musician Bascom Lunsford as chronicled by Loyal Jones, along with other famous songcatchers of the period, he drove around region capturing a range of singers and songs using the technology available in the period, a notebook and Dictaphone equipped with first wax cylinders and later aluminum cylinders (Jones and Forbes, 1984). Like us, Brown involved his students in the project as well, encouraging them to capture songs and research their origins. Today most of those recordings are still housed on wax cylinders and glass disks in the Duke Libraries, and in the Library of Congress, with about 400 songs having already been converted to digital formats. The rest are being converted as part of a substantial Council of Library and Information Resources grant.

In addition to learning about Brown, histories of the music, songcatching, and folklore practices of the period, students in a Fall 2015 NC Jukebox course began to work closely with the 400 digitized recordings we currently have available, developing metadata, transcribing songs, and organizing their materials in spreadsheet, blog, and database form. Our project also explores biographies of the singers, transcribes the songs as heard on the tapes in in comparison to other versions, and traces the Scotch‑English history and contemporary analogues of the songs themselves through research in Child’s Ballads and other key sources (Child et al., 2001). In addition, we have begun to demonstrate change over time and space through maps, patterns, flows, timelines, and networks of the music - a kind of distant listening, or viewing of its collection and presentation, with more to come. In the physical exhibits, interactive touchscreens, period photos, and hybrid analog‑digital audio playback machines – a radio, a Jukebox, and perhaps a 78‑playing phonograph – will invoke the historical conditions of production and reception of the music for diverse audiences.

As an historiographical research project, NC Jukebox is also offering opportunities to explore firsthand how social and material conditions affect the writing of cultural history itself. Over the course of this project we have learned about the history of songcatching and folklore as social and academic practices designed to verify expectations about a specific kind of musical heritage. Brown died before his work could be compiled into the published versions of his work. As his papers reveal, not all of the songs he collected were included in the final, posthumous collection of his work (Guide to the Frank Clyde Brown Papers, 1912-1974, 2016). His subsequent editors, like other before them who were seeking a pure musical tradition descended from that of the Scots-Irish settlers in the region, as seen in Ritchie and Orr’s Wayfaring Strangers, for example, picked and chose songs to include in the published work (Ritchie, Orr and Parton, 2014). Their criteria are (helpfully for future researchers) sketched out in their editorial notes, which are also in the archives. Songs that were too popular, had been published, were too religious, or, perhaps most significantly, were from African American traditions, were excluded from the published collection, even if familiar from other sourdes like the Library of Congress Checklist of Recorded Songs (U.S Library of Congress, 1942). On another note, we also experienced the lingering effects of musical and cultural segregation first-hand as a class when our well-intentioned musical guest, a contemporary folksinger who is helping keep the Mountain Music traditions alive today, explained that he was going to perform a song as he had heard his “colored” neighbors sing it growing up (McKinney, 2015). This moment became part of a class conversation about representing tradition while at the same time acknowledging our contemporary perspectives upon it in how we frame the music.

This project is also about the history of recording and reproduction technologies, which has deeply affected the content. Encountering recordings made from wax cylinders and glass disks, which included a white-glove visit from Special Collections as well as examining photographs of Brown and other “in the field,” encouraged conversations around our continuously evolving standards and expectations for archiving and reproduction. Our students had to consider whether it was more “authentic” to leave in the hisses and crackles that had made it into the third generation audio files they were listening to, or whether they could and should attempt to clean up the sound quality so it was closer to the “original” source – the singers themselves. Were we archiving the archives, or the ur-performances? Our students also learned about and from Charles Bond, the onetime Duke undergraduate (and now lawyer in San Francisco) who serendipitously took it upon himself in the 1980s to transfer some of the existing recordings to reel-to-reel tapes, using a moog synthesizer to clean up some pops and crackles. 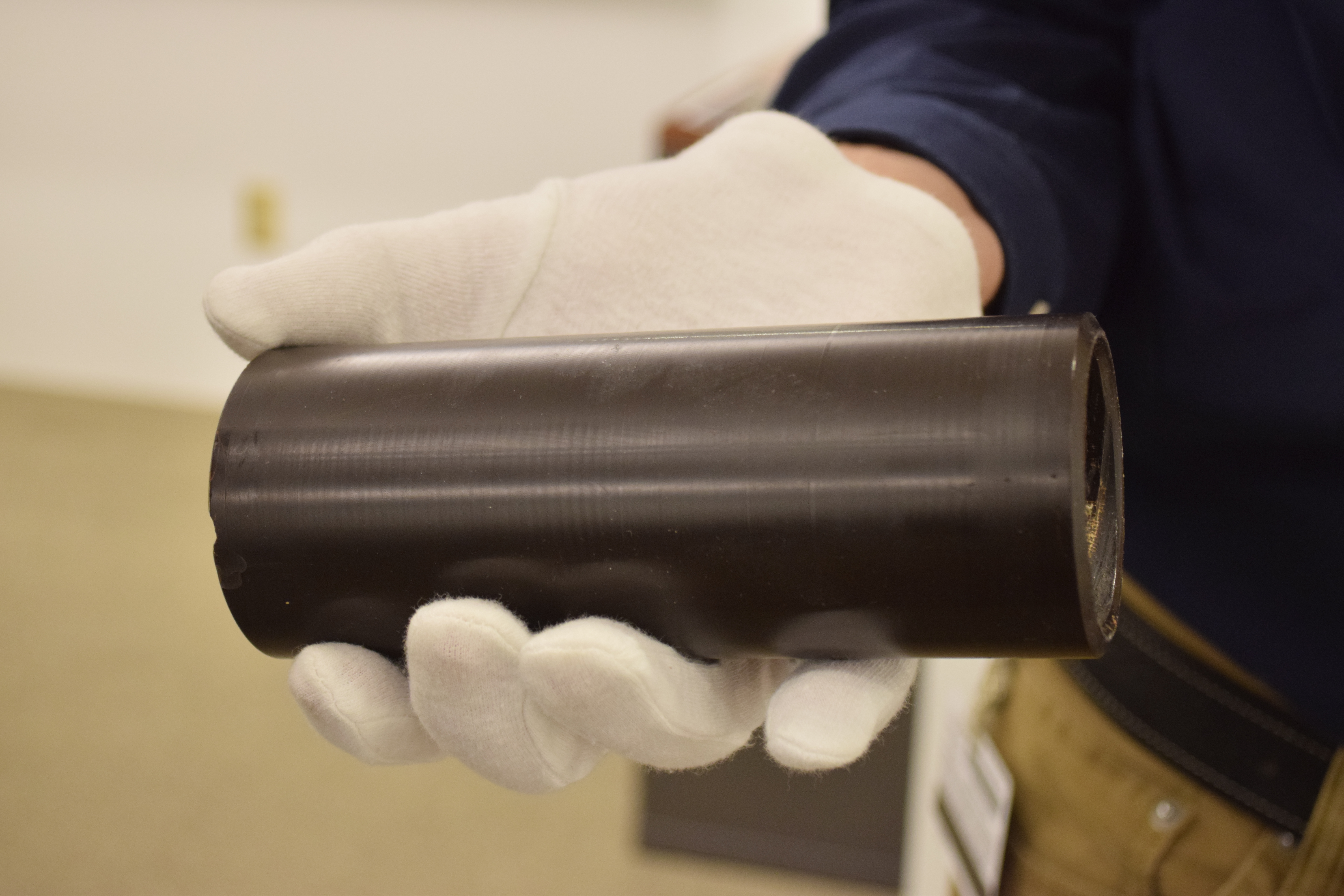 Further, we discovered how the limits of the recording medium itself reveal the priorities of the documentarians and archivists involved. Wax disks could only record 6-7 minutes of a song, as the Federal Cylinder Project editors note (Gray and Schupman, 1990). Songcatchers might record just one stanza of a song, rather then the whole performance, a fact that highlights that it was the intellectual process of abstracting data from the performance, to be converted to written notation and lyrics, rather than the performance itself, that was most valued for academic folklore purposes. The recordings were data to mine rather than songs to hear. We have also confronted challenges to our efforts in repatriation and exhibition as we began to develop our downloadable “Greatest Hits” of the FCB collection. Because of copyright restrictions on published songs, in the end we may need to limit our final song choices to the purely folkloric – putting us in some cases right back in line with Brown’s purity-seeking editors! We have even begun to wonder about the NC Jukebox idea itself as a title and concept, given that the term jukebox didn’t come into common parlance until the 1940s, as we learned from Jukeboxes:An American Social History, and the music we are sharing was most likely shared at the time either locally or over live radio, as our guest Terry McKinney told us (Segrave, 2002). Our presentism is a both a problem and an acknowledgement of our own historicity and subjectivity.

NC Jukebox is serving as a prototype for future “Archives Alive” projects at Duke University in terms of pedagogical approach, access to primary and secondary source materials from Special Collections, community engagement, and digital platform and exhibition development. As a digital heritage project designed to serve multiple audiences, the digital and onsite exhibition components are being built with an eye towards multiple display formats and locations for a single set of materials within a grown growing database of content. This includes exhibition in a regiona museum organized by McKinney himself (Neufeld, 2015). It also necessitates metadata standards and library infrastructure, a conversation that is ongoing with our Library staff. For the exhibits in Western North Carolina and at the Rubenstein Library we have websites, Omeka exhibits, and interactive web graphics, as well as the downloadable playlist and physical exhibits and listening stations. For the archive, however, we are working with Library and technology partners on a more sustainable and flexible content management system in Drupal that draws content from the more permanent institutional repository solution, which will serve as the substrate for future development as well as, we hope, drive later installations. Our hope is that subsequent generations of students, librarians, and scholars will be able to build upon what we have done in bringing the archives alive.