As Susan Schreibman (2014) points out, a digital edition, as opposed to a printed one, is never really complete as several layers of annotation may always be added to represent and enrich the original content. TEI (Burnard, 2014) allows for several types of information - textual, linguistic and semantic - to be layered and made explicit and retrievable by a machine. Such is the case for instance with what is commonly known as semantic tagging.

In this paper, we focus on Named Entities (NE), in particular names of Persons and Geographical Places. Adding NE mentions is supported by TEI with appropriate tags (such as <persName> and <placeName>), whose addition in a digital critical edition has somewhat the same function that indexes of places and persons have in a printed one. As mentions may be ambiguous (same string for different people, same place with different names,....) some referencing and disambiguating identifiers are required. But digital editions allow for much more than simple internal referencing. By pointing to external sources, structured information contained in the form of linked data in the semantic web becomes available to scholarly research.

In this work we present REDEN ONLINE, a system that enables scholars to automatically add external references to annotations of persons and places. The system is a web interface taking TEI as input, where mentions are already marked up, and automatically disambiguates and links such entities to an appropriate linked data set using a graph based algorithm for disambiguation. Moreover, our system provides data aggregation and visualization facilities by using the information found in the reference sources.

Semantic tagging is a hot topic in the digital humanities. Tools for semantic enrichment are, such as Pundit (Grassi et al., 2012, 2013), already available and allow for the interactive and intuitive annotation of portions of text. Automatic Named Entity Recognition and Linking techniques may be implemented to detect mentions and to suggest links to external knowledge bases.

Input formats to such systems may vary from plain text to html, but ideally a tool should process available standard formats, such as TEI-XML for text and RDF/OWL for information. Using linked data sources for disambiguation and enrichment is thus strongly recommended. By doing this, external sources of structured and regularly updated information can be made available to the scholar without having to be directly incorporated into the inline annotation, that can be left as simple as possible. This in turn allows for several customizable views, as linked data sources may be queried with the SPARQL query language to retrieve only the amount of external information that is necessary for a given task.

The treatment of spatial and temporal information is a typical task for which this approach is particularly effective; the availability of geographical databases and the complexity of the information are best accessed by pointing from within the digital edition to an external link. But also other types of semantic information seem to be particularly apt for connection to rich linked databases. So for instance bibliometric sources can be used to enrich texts with additional information on authors.

Typical targets for references are DBpedia and Geonames, that, for their genericity and connection to other sources, are at the heart of the linked data cloud. But they may be supplemented by more domain specific sources of information. For instance, Pleiades provides geo-historical information for ancient places.

REDEN ONLINE is set against the background of work carried out at LABEX OBVIL in Paris, where quality digital editions for French literary texts and criticism are produced and used in research and higher education. Recently a series of projects were carried out to semi-automatically annotate and reference places, organizations and authors. Gold standards were also produced, in close contact with researchers in French literature, so as to establish guidelines of annotation that best suit their ongoing research.

The general purpose is to provide tools for both:

OBVIL literary scholars are interested in plotting the distribution of the mentions of given authors over time in French literary criticism, in order to study the appreciation of Molière over the centuries, or in producing charts representing the distributions of professions in authors mentioned in given periods, to trace the influence of scientists and their ideas on art and literature in the age of positivism (Riguet, 2015). Other visualizations captured the emerging influence of foreign countries in the French literary panorama over time by combining the date of the publication of the essays with the detected toponyms.

NLP technologies are used to facilitate various aspects of the semantic enrichment of TEI editions, in an annotation echosystem where texts are first processed and then manually checked. The detection of mentions of places, authors (and also organizations) was tackled by using a Named Entity Recognizer and Classifier (UNERD, Mosallam et al., 2014).

Once the entities are correctly detected and classified, external references need to be added to disambiguate mentions and to connect them to additional information. To this purpose we developed REDEN 1, a Named Entity Linker that uses a graph-based algorithm and linked data sets to identify the correct referent for each mention (Brando et al., 2015, Frontini et al., 2015a, Frontini et al., 2015b for the technical details).

REDEN's input consists of a TEI text with detected mentions and several parameters specifying among others the class of entities to be detected, the reference base to use and a set of pre-compiled indexes. REDEN is applied for each class of entities separately, and works at best when several mentions are disambiguated at the same time. It retrieves all candidate referents for each mention of a context (say a paragraph) and then all the available information from the semantic web. It builds a sub-graph of all candidates and chooses the correct referents for each mention with the help of the formal relations between them. From Figure 1 you can get an intuition of how REDEN works. 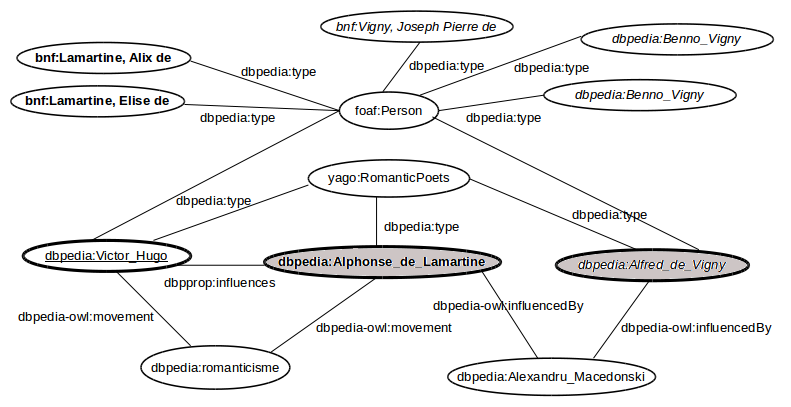 Figure 1 The graph based algorithm disambiguates between different possible referents for the mentions of "Victor Hugo" (unambiguous in this example), "Lamartine" and "Vigny" (both having several candidate referents) based on information found in DBpedia. Correct referents (in grey) are chosen based on how well connected they are within the context Here the crucial node is clearly that of yago:RomanticPoets.

So far our efforts have concentrated on the production of a text annotation and referencing pipeline for the production of such enriched TEIs with annotated and referenced mentions. Their exploitation for data aggregation and visualization was carried out offline and with ad hoc processing tools. With REDEN ONLINE we now want to make linking technology available online while at the same time providing users with some generic visualization of the results.

In what follows, we present the REDEN ONLINE interface with some screenshots from an example where two texts of the Labex OBVIL 2 digital library have been automatically linked to external sources, namely:

- Réflexions sur la littérature a series of essays on French literary criticism by Albert Thibaudet, published in 1936 - author's mentions linked to entries in the linked data base of the Bibliothèque Nationale de France (BnF).

The user (Figure 2) loads a TEI text with annotated <placeName> or <personName> tags, chooses which class of entities to process (places or nouns) and the system runs the disambiguation and linking algorithm against the given linked data base - here French DBpedia and/or BnF. Then external information is extracted from the source and used for generating a particular view of the text. The result is a summing up of the disambiguated locations (some place names may be non resolvable because they are absent from the linked data base) and a visualization.

For locations the visualization consists in an interactive map that also takes frequency of mention into account. Coordinates are retrieved from DBpedia when available and the map can be zoomed in, up to the level of streets (see Figure 3 where some places in Paris have been identified in the text by Apollinaire), when relevant.

For persons (see Figure 4), portraits of authors are automatically downloaded and visualized.

The conference presentation will demonstrate REDEN ONLINE, a web based tool that enables researchers to connect place names and person names in their texts to existing linked data sources. The underlying technology will also be explained, in particular its use of standard formats, such as TEI and RDF for the linking algorithm, and GeoJSON for the creation of the map. We will also argue in favour of our economicity approach, namely the choice of not embedding semantic information in the TEI, which enables the use of different databases and the production of ad hoc "views" of the document.

It is well known that aggregation and visualizations techniques may "assist the critic in the unfolding of interpretive possibilities" (Ramsay, 2008) when analysing texts. This tool has been particularly designed for the study of literature and literary criticism; in the presentation examples of use will be given using ongoing research on Apollinaire, highlighting how the visual representation of the itineraries contained in the stories may be considered as a form of novel "digital reading" of the text. 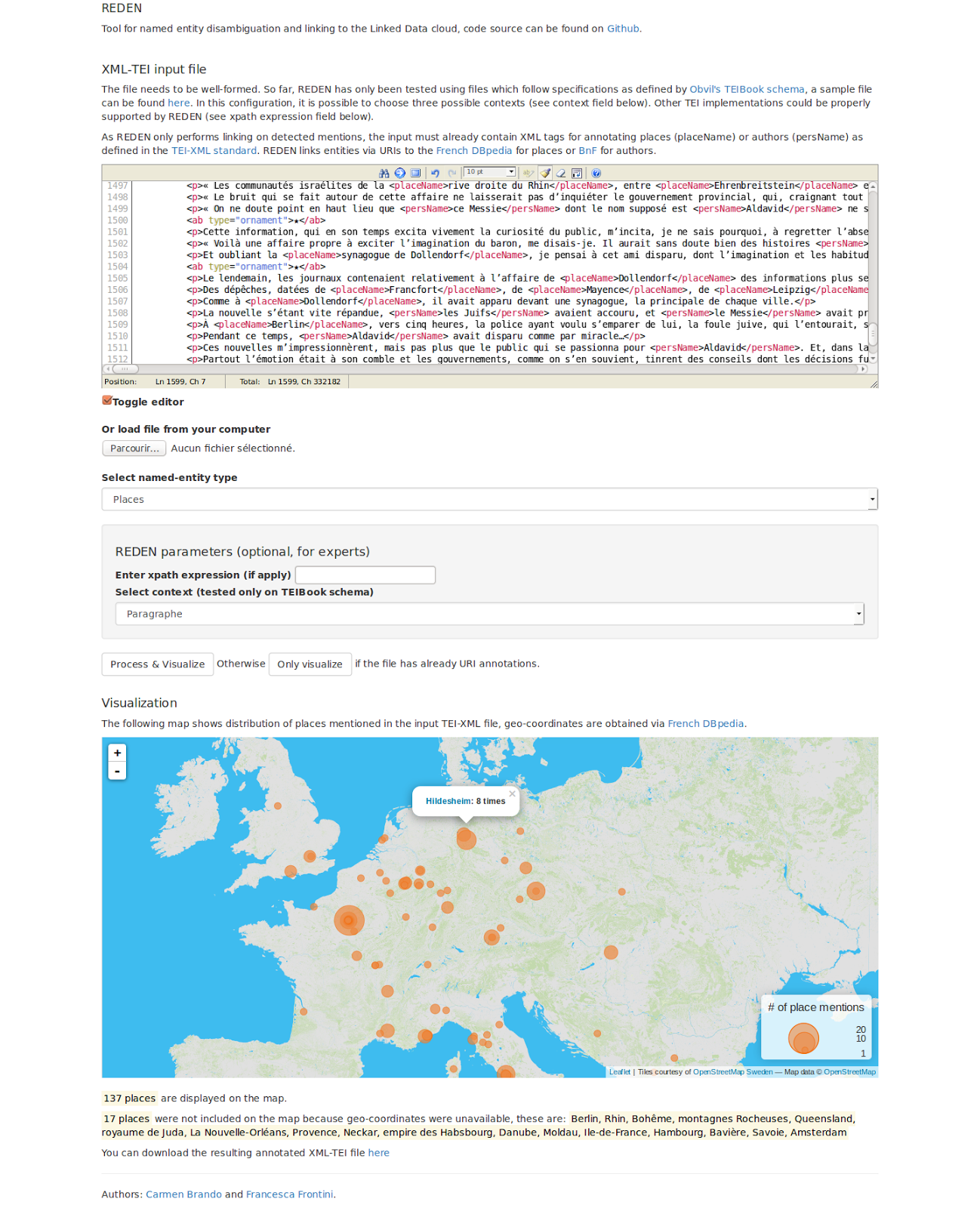 Figure 2 The REDEN ONLINE interface, with a sample text from Apollinaire. Place names results are visible as a map visualization. 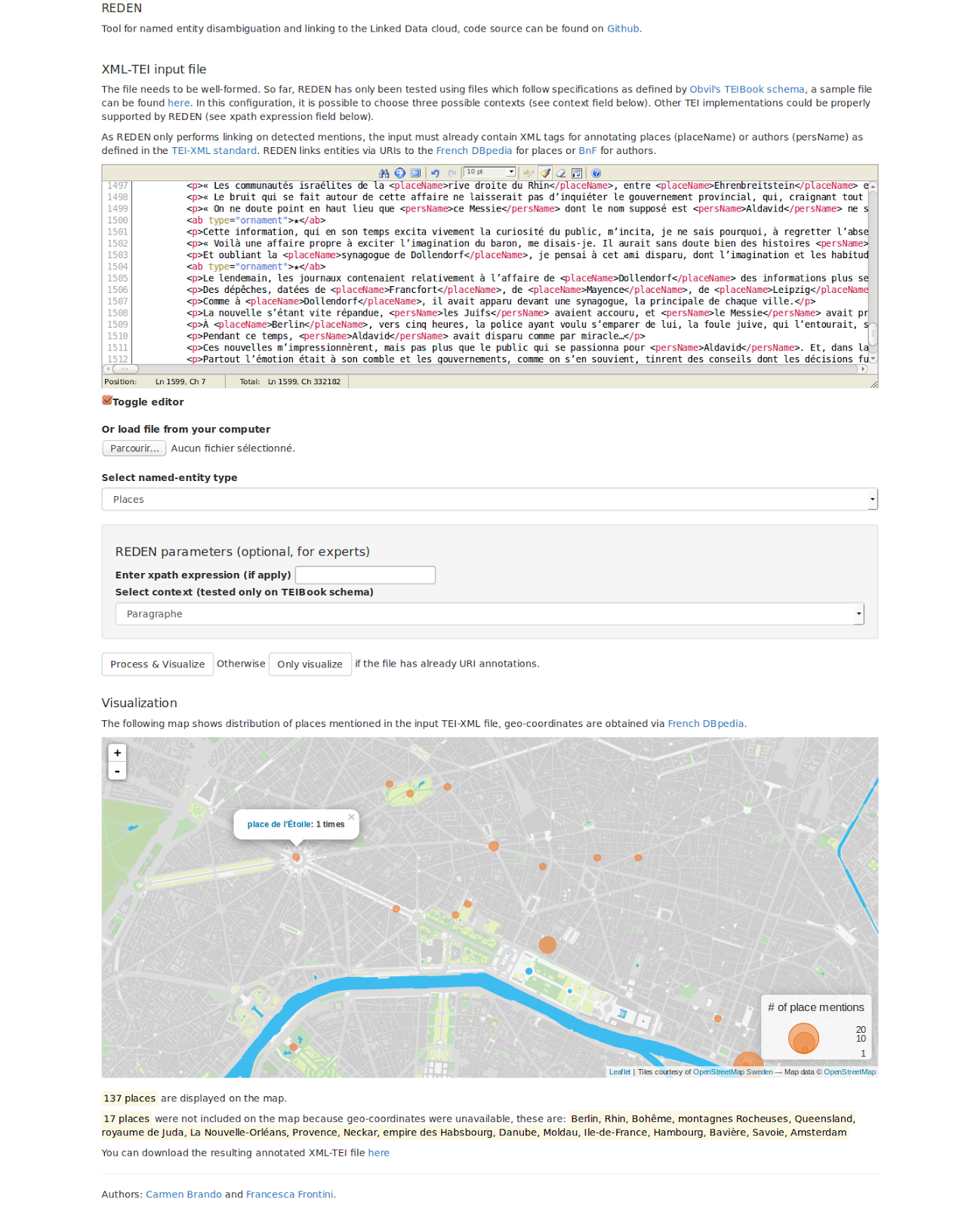 Figure 3 The REDEN ONLINE interface, with a sample text from Apollinaire. Zoom on Paris of place name results. 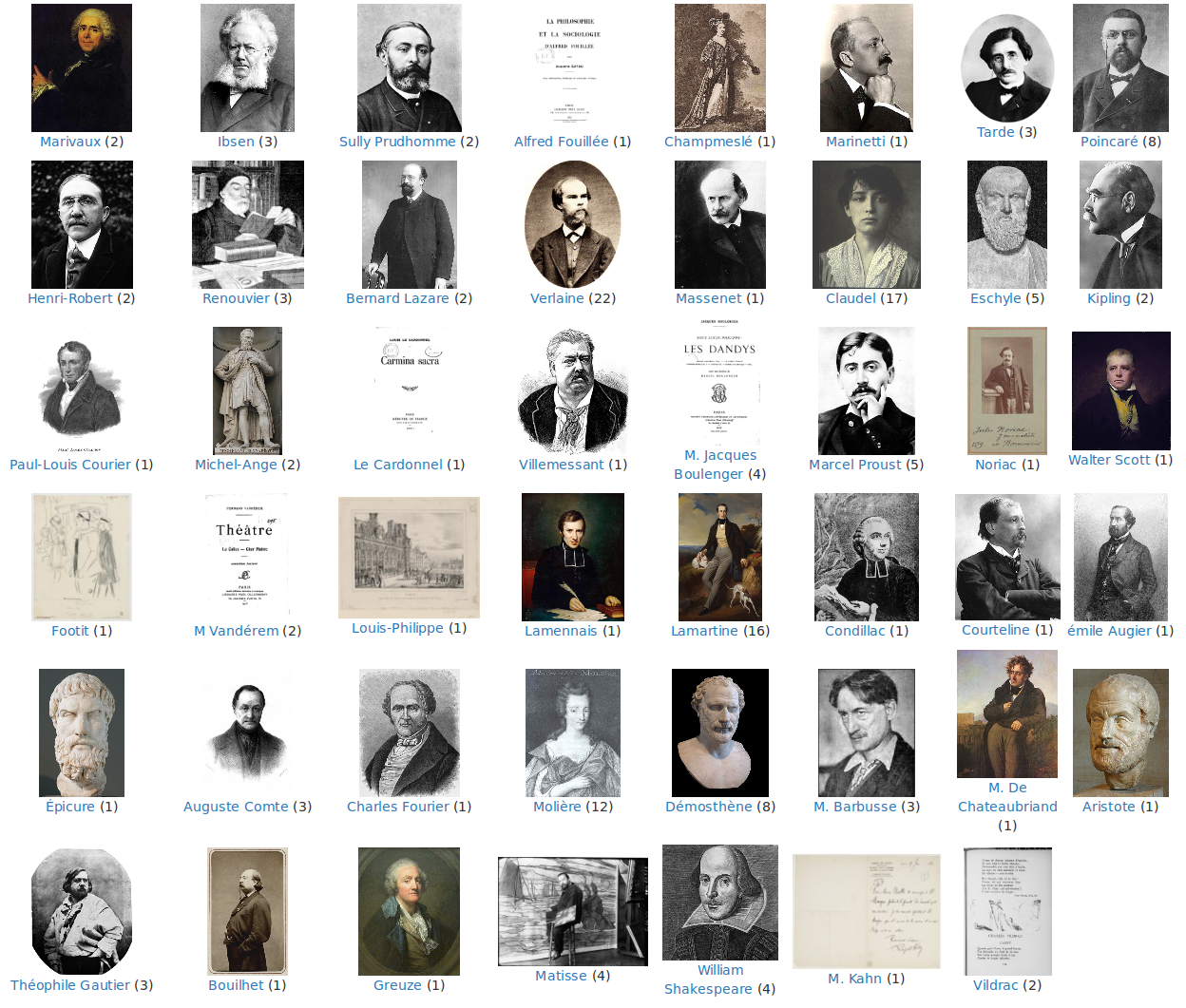 REDEN is open source; you can find the code at https://github.com/cvbrandoe/REDEN.