Tracing the Genesis of Pessoa's Envisioned Work: a Digital Edition of his Editorial Projects and Publications

A digital edition of Fernando Pessoa, considered one of the most significant Modernist poets and writers, is being established through a collaboration between scholars from the Institute of Literature and Tradition (IELT) of the New University of Lisbon and the Cologne Center for eHumanities (CCeH) of the University of Cologne. The edition focuses on the contrast between the potential character of Pessoa’s numerous lists of editorial projects and his few actual publications in lifetime.

Though the digital platform is primarily designed to support the research aims of the project, the procedures can be reused by others (encoding, scripts). From a theoretical standpoint, the question of „work genesis“ (on a macro and micro level) is relevant to a wider audience. In the case of Pessoa, the publication of the editorial lists and plans together with the published works in lifetime contributes to the discussion on the genesis and status of each stage of a work.

2. State of Research and Aims

It has been much debated by literary scholars whether Fernando Pessoa’s work should be characterized as fragmentary or unitary (see Coelho, 1949; Gusmão, 2003; Martins, 2003; Sepúlveda, 2013). Due to the low number of publications in lifetime, the existence of a vast literary archive and the use of many fictional authors, named “heteronyms” by the author, the coherence of his work has been questioned. The present edition, in contrast, is based on the assumption that Fernando Pessoa constantly worked on the organization of his work, as witnessed by the many editorial lists, notes and plans which are part of his estate (Cunha, 1987; Sepúlveda, 2013).

These papers are the subject of the digital edition at hand, together with the 60 publications of poems that Pessoa realized in journals and literary magazines. That way, the genesis and evolution of his work as planned by himself can be studied and the published texts be examined in the light of the editorial projects preceding, accompanying and following them during the author’s life. A significant part of the documents witnessing the editorial activity of the author have not been published before. For those which have been published, past editions in bookform define themselves by following either the first or the last version of a text, or by choosing from the existent variants from a hermeneutical standpoint (Duarte, 1988; Galhoz, 1993; Martins, 2011; Castro, 2013).

As the textual variants and hesitations are critical to understand shifts in the conception of the work, e. g. when work titles are assigned to heteronyms or the composition of a planned publication is changed, the digital edition aims at offering several coexistent forms of transcription. To facilitate the understanding of the texts and the work they trace, editorial comments are to be added to the documents.

In terms of editorial methodology, the digital edition targets at exploring the possibilities to combine different editorial procedures from a documentary, a diplomatic, a genetic and an enriched edition, overcoming previous oppositions between different editorial approaches to the poet’s work. Relations between the editorial projects and the published texts are formalized via the encoding of “work references”. By extending the concept of work to include projections which the author makes on a macro level, i.e. outlining his works in terms of titles, authorship, structure and publication organs, the present edition contributes to the debate about the status of the work and its place in the digital edition (Robinson, 2013; Sahle, 2013).

The realization of the digital edition relies primarily on procedures and technologies coming from the X universe. Transcriptions of the documents and metadata are encoded according to the standard of the Text Encoding Initiative (TEI-P5). The TEI documents are stored in an XML database (eXist) hosted on a web server together with the digital facsimiles. While the work on the documents is going on, a GitHub repository reachable at < https://github.com/cceh/pessoa> is used to hold successive versions of both the TEI documents and the application which is developed. Scripts written in XQuery and XSLT control the transformation of the documents’ underlying representation into the presentation layer. Some of the components shipped with eXist are used: Bootstrap, JQuery and eXist’s Templating Framework plus a SIMILE timeline and the OpenSeadragon image viewer. 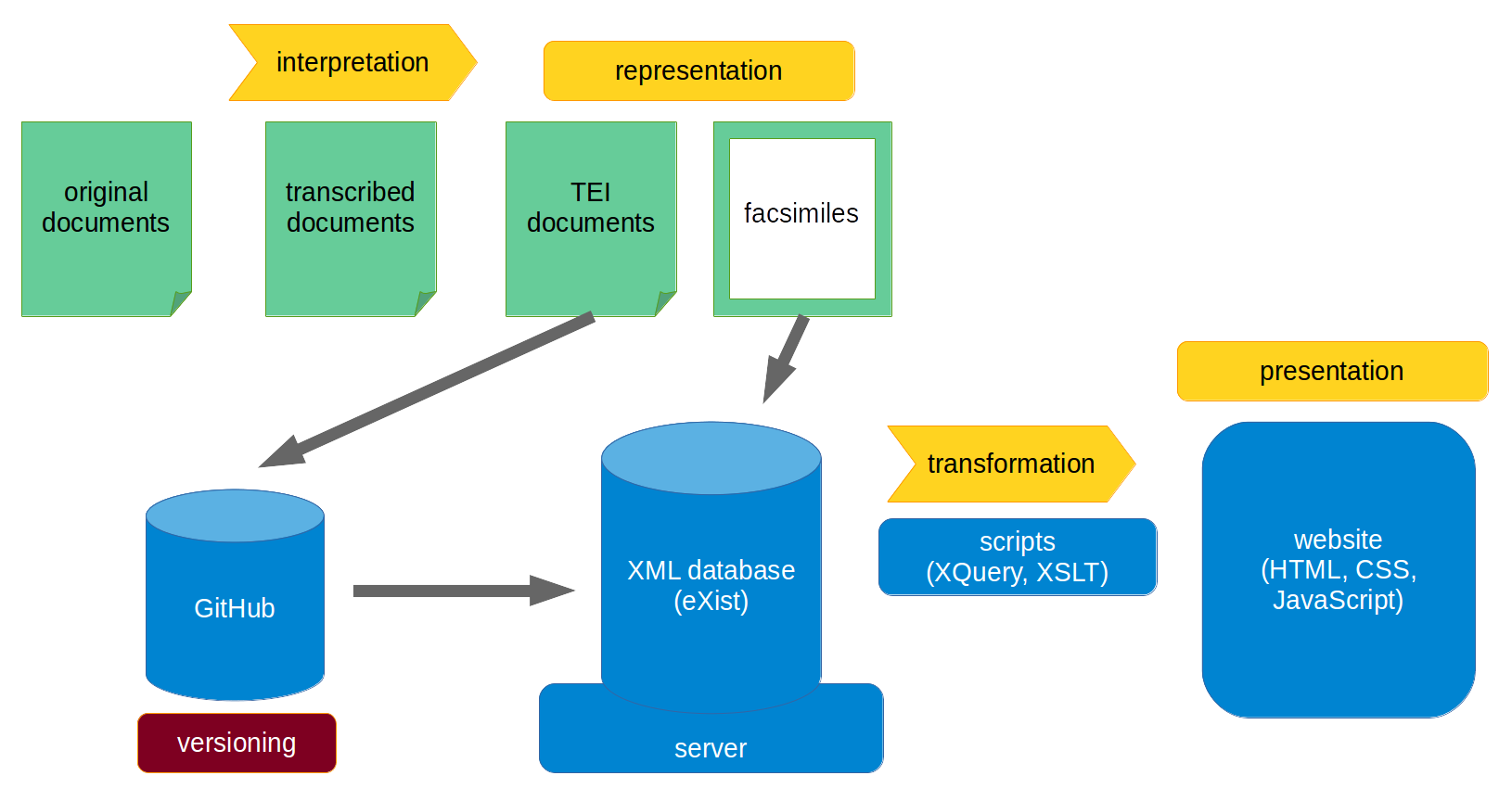 The TEI encoding is controlled with a RelaxNG schema based on an ODD file. The recorded metadata include bibliographic details, the date or period of the document’s genesis or publication and a genre classification (editorial notes, editorial lists, editorial plans, poetry).

Among the encoded textual phenomena are additions, deletions, substitutions, omissions, variants and notes. First and last variants are especially marked to allow for the establishment of a first and last version of the text. Moreover, the following types of entities are labeled: persons, journals, texts and works. Special attention is paid to the four principal authorial figures of Pessoa: Alberto Caeiro, Álvaro de Campos, Fernando Pessoa and Ricardo Reis. Besides registering their mere occurrence, the role they have is determined (they can be mentioned as author, editor, translator or topic of a work). Occurring persons, journals and works are managed in a central knowledge base which serves as the basis for their identification in the documents and the creation of comprehensive indexes. The following figure illustrates how the relationship between an editorial list and a publication is established via the reference to works:

Figure 2: Example of the encoding of work references in TEI

The document MN909 is an editorial list. One item of the list is a mention of the work “Cancioneiro” or “Itinerario”. In the central work list, those titles are assigned to the poems of Fernando Pessoa. One of the poems is “Abdicação” which in turn is represented by a publication carrying that title. Thus, the relationship between the editorial list and the publication is made explicit through the encoding and can be exploited e.g. in the edition’s presentation.

Work on the digital edition has been going on since October 2014. It is planned to launch the edition within 2016. Until then, more documents will be uploaded and work on the presentation will be finalized. Results so far can be viewed at < http://projects.cceh.uni-koeln.de/pessoa>.

The presentation is multilingual (Portuguese and English). Access to the material is facilitated by different browsing options: by author, documents, publications, works, genre, and chronology. A simple and an advanced search enable the user to make specific and custom requests. As a first analytic approach to the question of the evolution of Pessoa’s work during lifetime, an interactive timeline visualising the chronology of editorial projects and publications has been created. 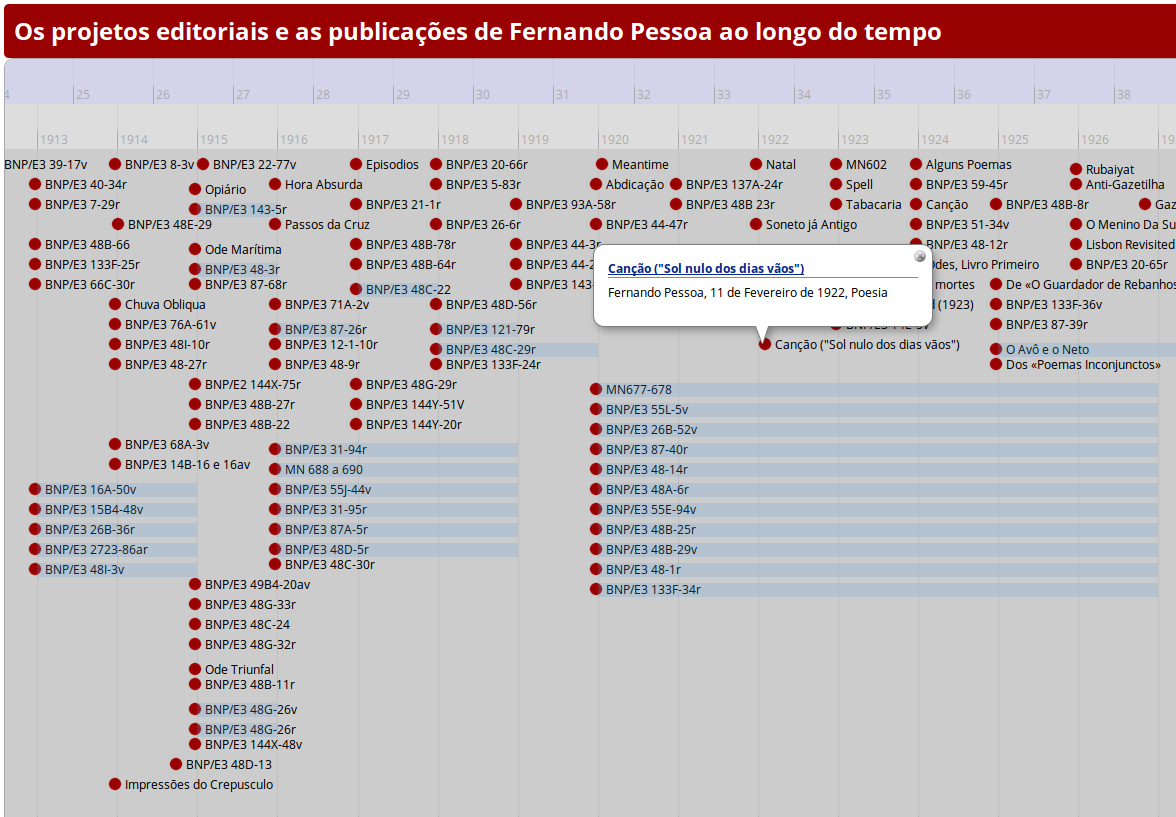 The publications and documents are presented in a synoptic view, juxtaposing the transcription on the left and the facsimile on the right side. The presentation of the documents containing the editorial lists, notes and plans is enhanced by offering the possibility to switch between the diplomatic transcription, the critically established text in the first and last version and a so-called “customized version” where the user can combine transcription features (e. g. if original line breaks should be maintained or omitted). Additionally, the synoptic view can be changed to transcription-index mode, where occurring persons, texts and journals are shown alongside the transcription of the document and links to the central indexes are established. The following figures illustrate the above mentioned features: 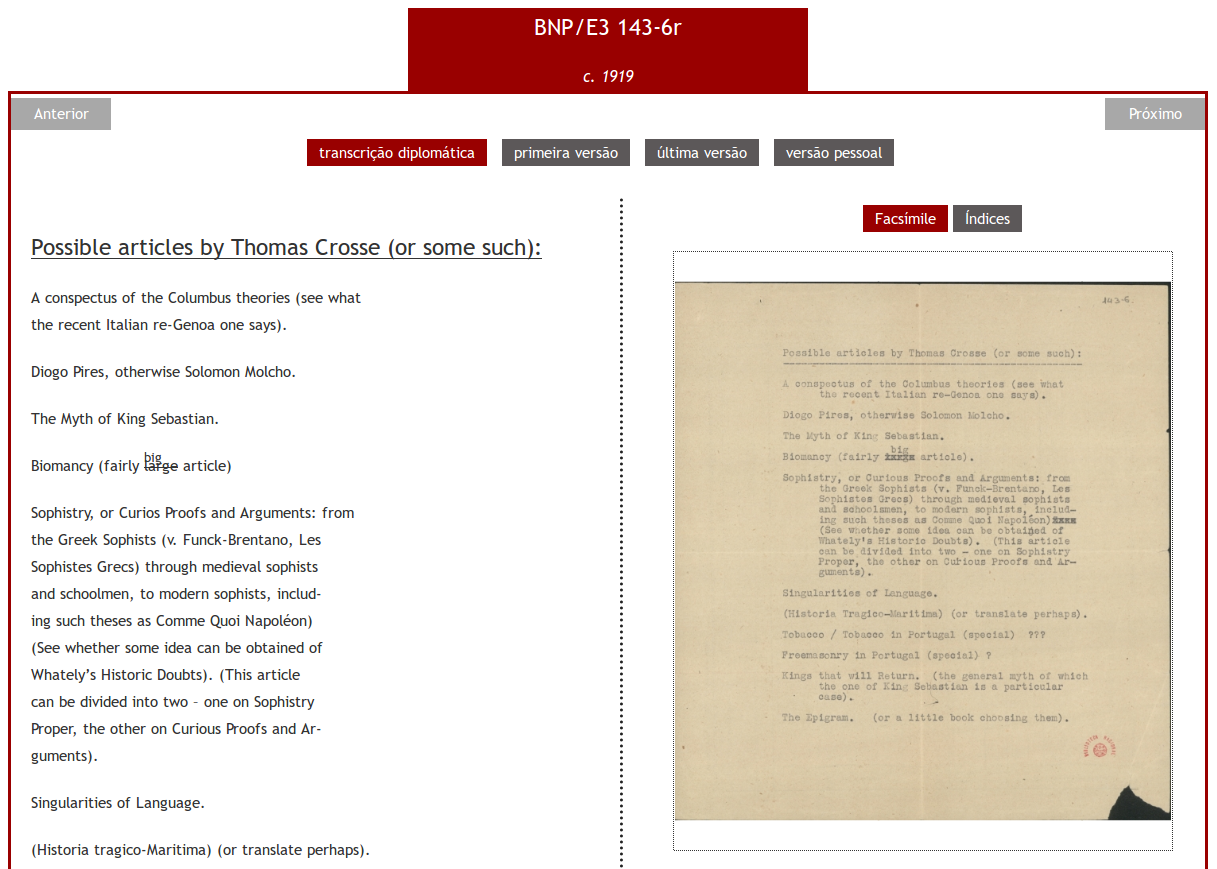 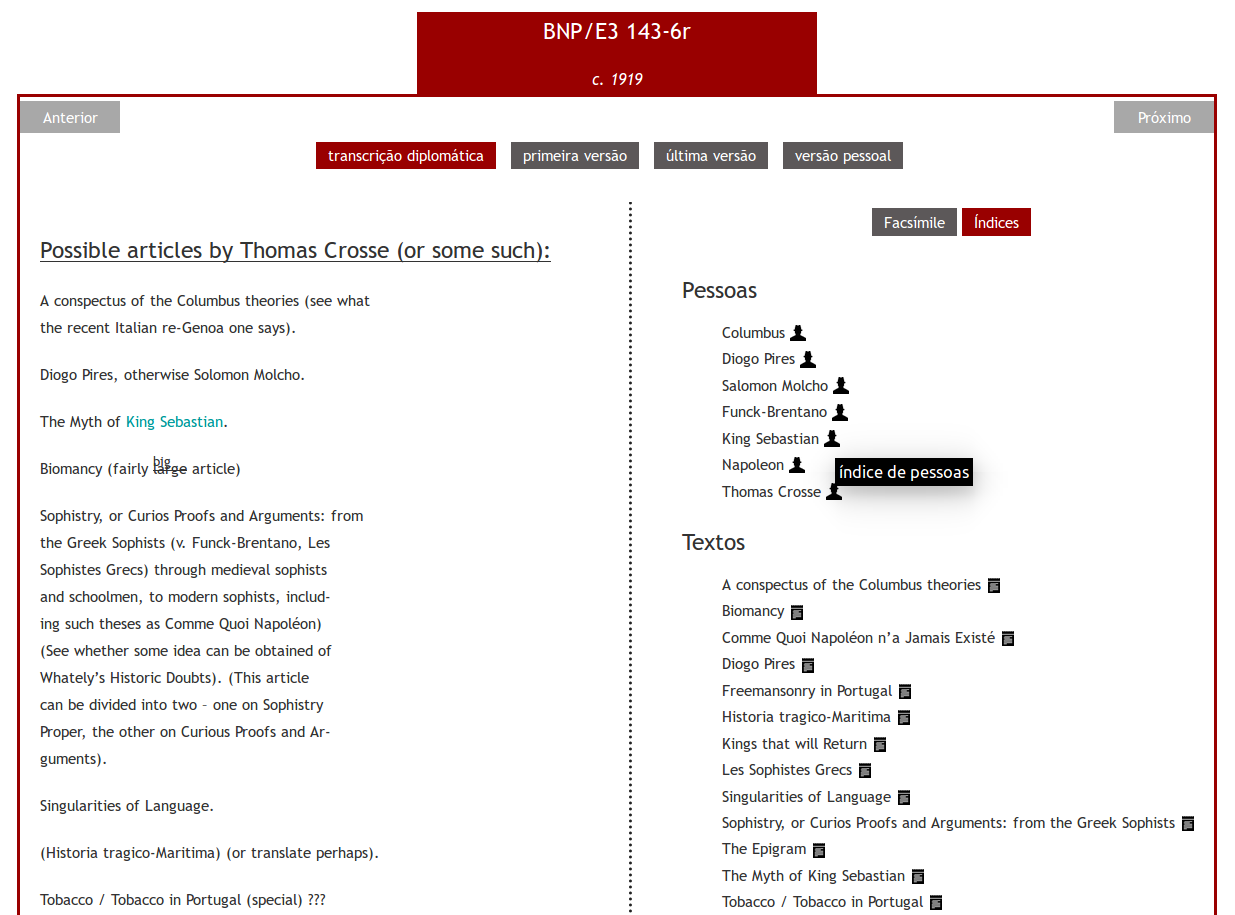 For each of the four principal authorial figures, the relationships between “works”, “publications” and “documents” are presented on an individual page (see figure 6). In the example, the works of Ricardo Reis are listed starting with attested alternative titles of the whole work (“Odes de Ricardo Reis”, “Odes”, “Livro de Odes”), followed by the titles of individual works. Links to the documents show where the works are mentioned in the editorial projects and links to publications indicate where a work has been published by Pessoa. 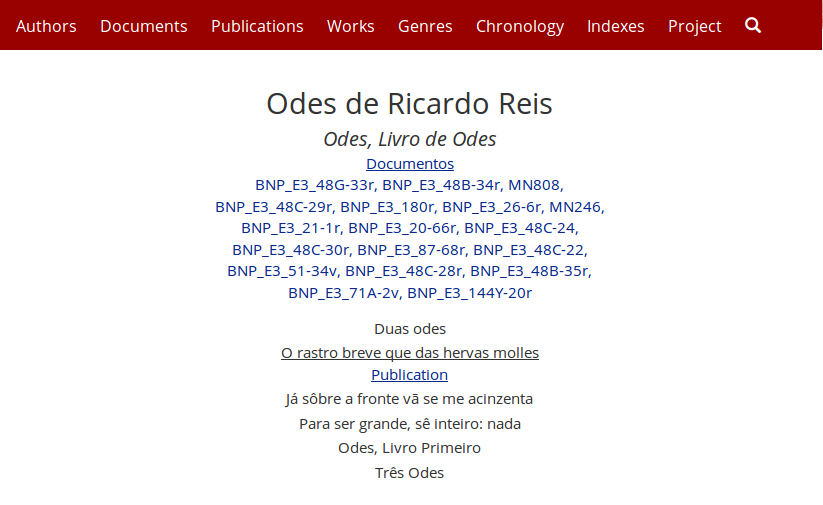 The digital edition of Fernando Pessoa shows that the author was continuously concerned with the organisation of his work and that he persistently planned its publication, even publishing little in lifetime. This supports the hypothesis that his work does have a certain unity, revealing a consistent development and not a fragmentary purpose, as suggested by a large number of critics.

In the edition, this understanding is underpinned by the encoding of micro-genetic textual phenomena in a basic way to elucidate shifts in the conception of work titles, authorship and publication plans in single documents. Developments of the editorial projects on the macro level are traced by encoding mentioned entities in the documents and thereby establishing links between documents, publications and abstract works.

Different editorial procedures are combined to explore the potential of a digital edition which proves fruitful to bring the understanding and editorial presentation of Pessoa’s work further than existing print editions, as well as contributing to clarify a major critical topic concerning the author’s envisioned unity of his work.