Testing the Doctrine of Election: A Computational Approach to Karl Barth’s Church Dogmatics

Karl Barth's Church Dogmatics (Barth, 1969-80) is widely considered to be one of the most influential works of Christian theology since the Reformation, and within it Barth's doctrine of election is considered a decisive contribution to modern theology (Webster, 2004: 1, 88, 93; von Balthasar, 1992: 174). Briefly, the doctrine of election, as a theological topic, describes the manner of God’s salvific work, particularly how God determines those who will be saved. Barth’s genius was to inscribe election within the relationship of the Father and the Son, Jesus of Nazareth, so that God is both the electing God and the elected human, and the humanity of Jesus is elected even while the divinity of Jesus is condemned. Over the past two decades, theologians have engaged in a rich questioning of the significance of Barth's doctrine of election for his own theology. His elaboration of the doctrine occurs in the document sections, traditionally referred to as paragraphs, 1 numbered 32 through 35 (of a total of 73 plus a fragment), with paragraph 33 being the primary location for Barth's innovative reworking of the doctrine of election. Some scholars, such as Bruce McCormack (McCormack, 2000, 2010) and Paul Jones (Jones, 2011), contest that election is a turning point in Barth's theology, decisively shaping the remainder of the Dogmatics to the point that some formulations after election are incompatible with formulations made prior to the doctrine of election, particularly within the context of Barth’s Trinitarian ontology. Others, such as George Hunsinger (Hunsinger, 2000, 2008) and Paul Molnar (Molnar, 2002, 2006), argue that while the doctrine of election is the heart of the Dogmatics, it is a part of a consistent and coherent whole, and does not mark an incompatibility between what comes before and after.

This paper engages the question of the significance of the doctrine of election, as elaborated in paragraphs 32 through 35, to the whole of the Church Dogmatics through algorithmic approaches. It suggests that if a portion of a corpora strongly determines the rest of the corpora after its appearance, there will be textual traces, such as changes in word frequencies and common semantic groupings, that can be detected through computational analysis. It approaches the corpora, consisting of the entire Church Dogmatics, including prefaces and forewords written by Barth as well as his unfinished fragments that have been published as the final volume of the Dogmatics, though a variety of analytic techniques.

The initial explorations are conducted through topic modeling in order to discover hidden thematic structure in texts (Blei, 2012). Using Mallet, we first run topic models on different collections of paragraphs, from 15 to 30 topics, to discern the thematic structure of the entire corpora, noting especially those topics that seem definitively about the doctrine of election. Given the hypothesis that the Dogmatics from paragraph 36 on is determined by the theme of election in a way that the paragraphs leading up to paragraph 32 are not, we break the corpus into paragraphs 1 through 31, 32 through 35, and 36 through 73 plus the fragment that Barth was writing before his death. We then run topic models with the number of topics ranging from 15 to 30, looking for the presence of topics indicating the doctrine of election. We also run similar models for the entire corpus minus paragraphs 32 through 35 in order to see whether election would appear as a theme in the Dogmatics without the presence of the paragraphs explicitly committed to explicating the doctrine. Examining the results, we find that election fails to surface as a topic at most levels of granularity when paragraphs 32 through 35 are not included. We find that at all levels of granularity in which the topics are meaningful and coherent, election does not appear as a topic in the corpus consisting of paragraphs 36 through 73, plus the fragment, and we offer an interpretation for why this is the case based on the rhetorical strategy that Barth employs throughout his lengthy work. 2 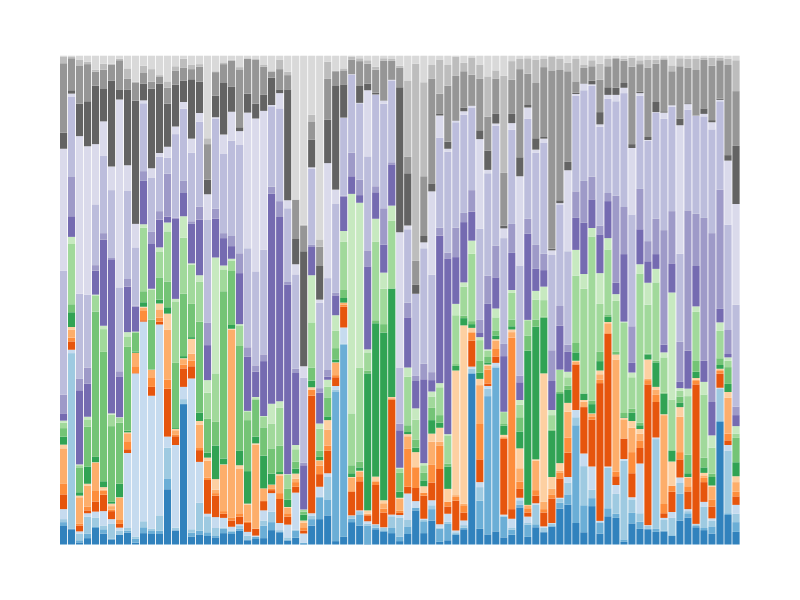 Fig. 1: Graph of topic distributions across the Church Dogmatics. Each column is one paragraph

Our topic models not only provide data for interpretation, but also supply a vocabulary for focusing further computational analysis. Based on words we determined to be distinctive to the theme of election, we examine overall frequency of key terms across the whole corpora, tracking the rise and fall of language specific to election. We also use term frequency-inverse document frequency (tf-idf) to examine which terms are particularly characteristic of individual paragraphs, paying attention to words typically associated with election (Kilgarriff, 2001; Garside, 2000). In a similar vein to that of our topic models, we determine mean tf-idf values for all features (words) in the broken down corpus, consisting of the same three chunks as determined above, at the levels of unigrams, bigrams, and ngrams (n=1-3). Looking especially at the bigram and ngram results, we do see shifts in the importance of some features that fit the hypothesis that Barth’s doctrine of election determines the rest of his work. If the proponents of this thesis are correct, there should be an increase in reference to Jesus Christ due to a stronger Christological shift, and a greater sense of the humanity of Jesus due to the election-based eternal identification of the Son, the second Person of the Trinity, with the historical human Jesus of Nazareth. We do see a rise in the importance of ‘jesus’ in the unigram set, and in the ngram set see the bigram ‘jesus christ’ appear in the election and after election corpora. In the bigram set, we see ‘elected man’ appear in the election set, which in Barth’s paragraph 33 references Jesus, and interestingly find “man jesus” as the fifth most characteristic bigram of the after election corpora. In relation to the text, we interpret this as an indication of the increased importance of the humanity of Christ in the election and after election corpora. 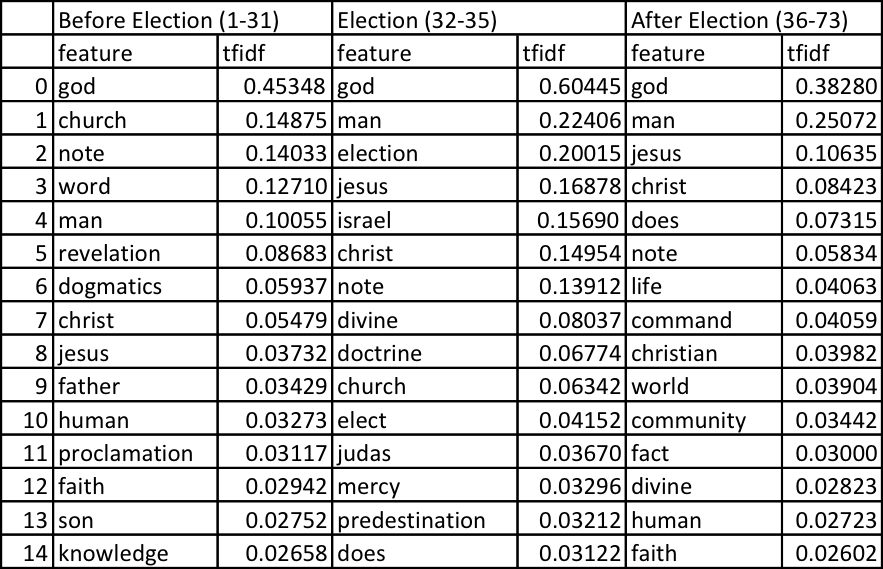 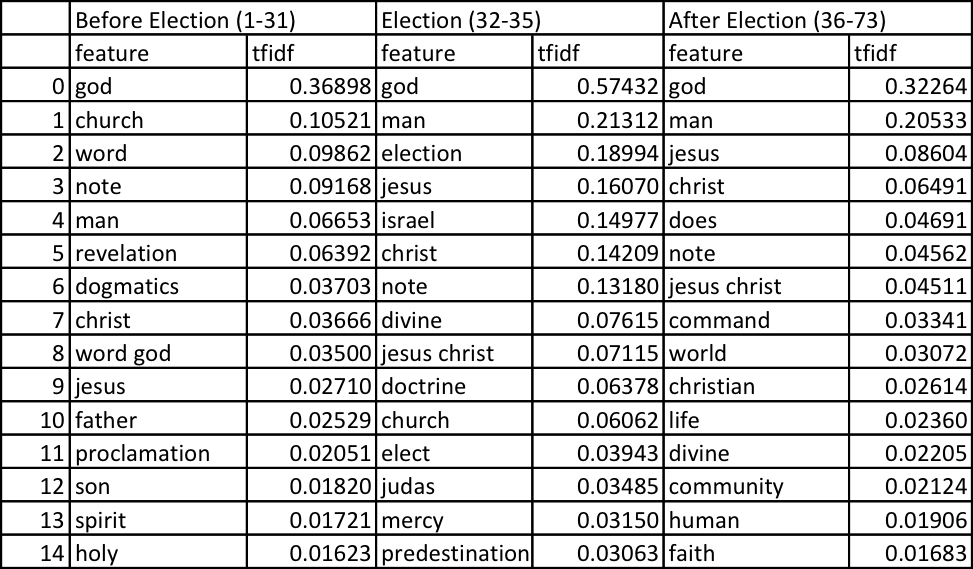 Based on these results, we explore two conclusions. While our analysis of frequencies and tf-idf values does seem to support the hypothesis that Barth’s doctrine of election is a determining point in the Dogmatics, the connection between high value features and a substantial conceptual shift is difficult to determine, especially when the conceptual shift regards that ontology underlying theological developments in many doctrinal loci. Our topic models likewise were inconclusive in identifying shifts in the corpus that could be attributed to the paragraphs on election. We suggest that Barth's style of writing, which notoriously circles around and repetitively approaches topics from different angles, though with a traditional theological vocabulary, proves resistant to current algorithmic approaches in textual analysis.

Barth’s Church Dogmatics are broken down into volumes, part-volumes, paragraphs, and sections. Paragraphs are the primary organizing unit, though, and each constitutes a coherent thematic whole.

In his text, Barth, Webster notes that Barth’s, ‘preferred method of exposition, especially in the Church Dogmatics, is frustrating for readers looking to follow a linear thread of argument. Commentators often note the musical structure of Barth’s major writings: the announcement of a theme, and its further extension in a long series of developments and recapitulations, through which the reader is invited to consider the theme from a number of different angles and in a number of different relations” (13). Barth frequently circles around his topics, returning again and again to various doctrines through different paragraphs, in each case attempting to approach in such a way as to show something new.