Our proposal aims to display the analysis techniques, methodologies as well as the most relevant results expected within the Exhibitium project framework (http://www.exhibitium.com). Awarded by the BBVA Foundation, the Exhibitium project is being developed by an international consortium of several research groups [1]. Its main purpose is to build a comprehensive and structured data repository about temporary art exhibitions, captured from the web, to make them useful and reusable in various domains through open and interoperable data systems.

The Exhibitium project aims to face the new challenges posed by the data-driven society respect to the production, management, use and distribution of digital cultural content. Specifically, the question that we want to respond is: how to take advantages of the universe of data related to cultural activity distributed through the Internet to generate value at very different levels (academic research, new critical narratives, cultural management, economic development, processes of social and cultural transformation, etc.)? Accordingly, multivalency, as a key notion of the new knowledge economy (Roney et al., 2012), is the guiding axis of the Exhibitium project.

To think on a precise working prototype, we have adopted as a central object of our research the art exhibitions that regularly held galleries, museums and art centers, since they produce a very large and heterogeneous set of data that can potentially be captured by means of web mining strategies.

For that, we have developed a technology infrastructure, which has been implemented in two dimensions:

a) A computing prototype consists of two modules operating in a complementary manner: Beagle, an automated data capture system which extracts information about art exhibitions from any web source; and ExpoFinder, a system for collecting and enhancing the information captured by Beagle (http://www.expofinder.es).

b. An aggregate of three data analysis and visualization platforms (SylvaDB, Techne Coword © and Geowave), which connect with the Beagle-ExpoFinder system using an automated export application [2]. (See in figure 1 a simplified diagram of the system). 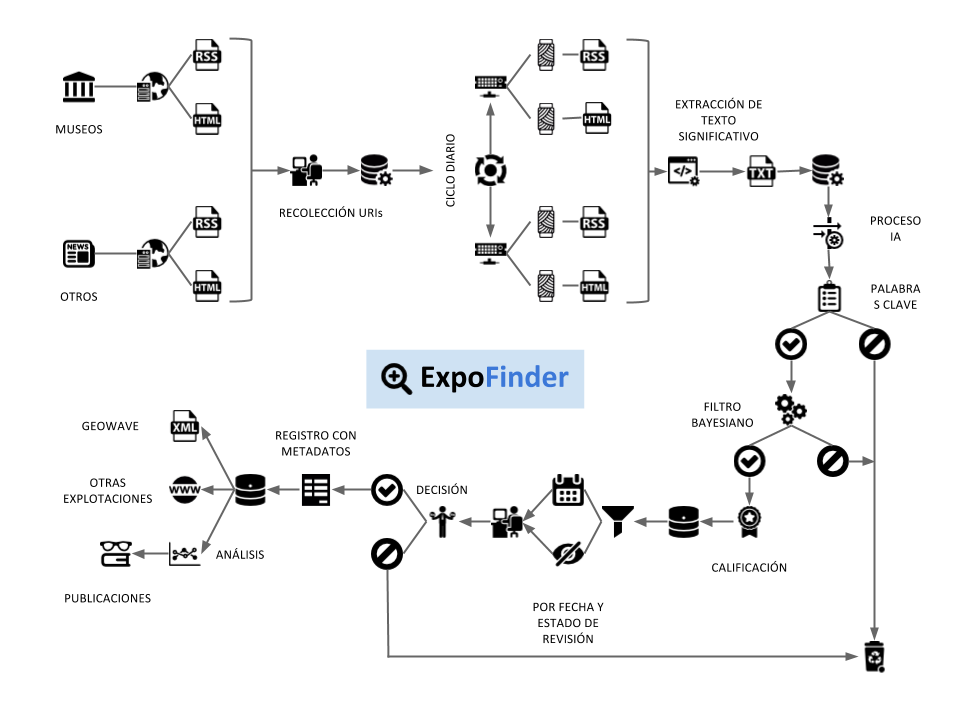 As regards the theoretical framework, Exhibitium faces the phenomenon of art exhibitions according to the actor-network theory (ANT) developed by Bruno Latour (2007), that is say, as complex cultural phenomena resulting from of a series of relationships established between heterogeneous human and no human actors -artists, curators, exhibition centers, funding agencies, publishing companies, artistic movements, artistic themes, etc.- that constitute dynamic networks among them. The application of the actor-network theory to the field of art exhibitions raises an interesting perspective, since the emphasis, rather than on the exhibitions themselves, is placed on the «mediation» processes (production, distribution, reception, etc.) as part of a social system in which the power relations that characterize the cultural institutions are unveiled.

Consequently, the Exhibitium project aligns with the growing research field oriented to explore complex networks in art and humanities (Schich, 2014). Particularly, we are using two types of methodologies.

a) Network analysis strategies through a graph database (SylvaDB) that we have structured according to an ontology specifically developed for the project (see figure 2). 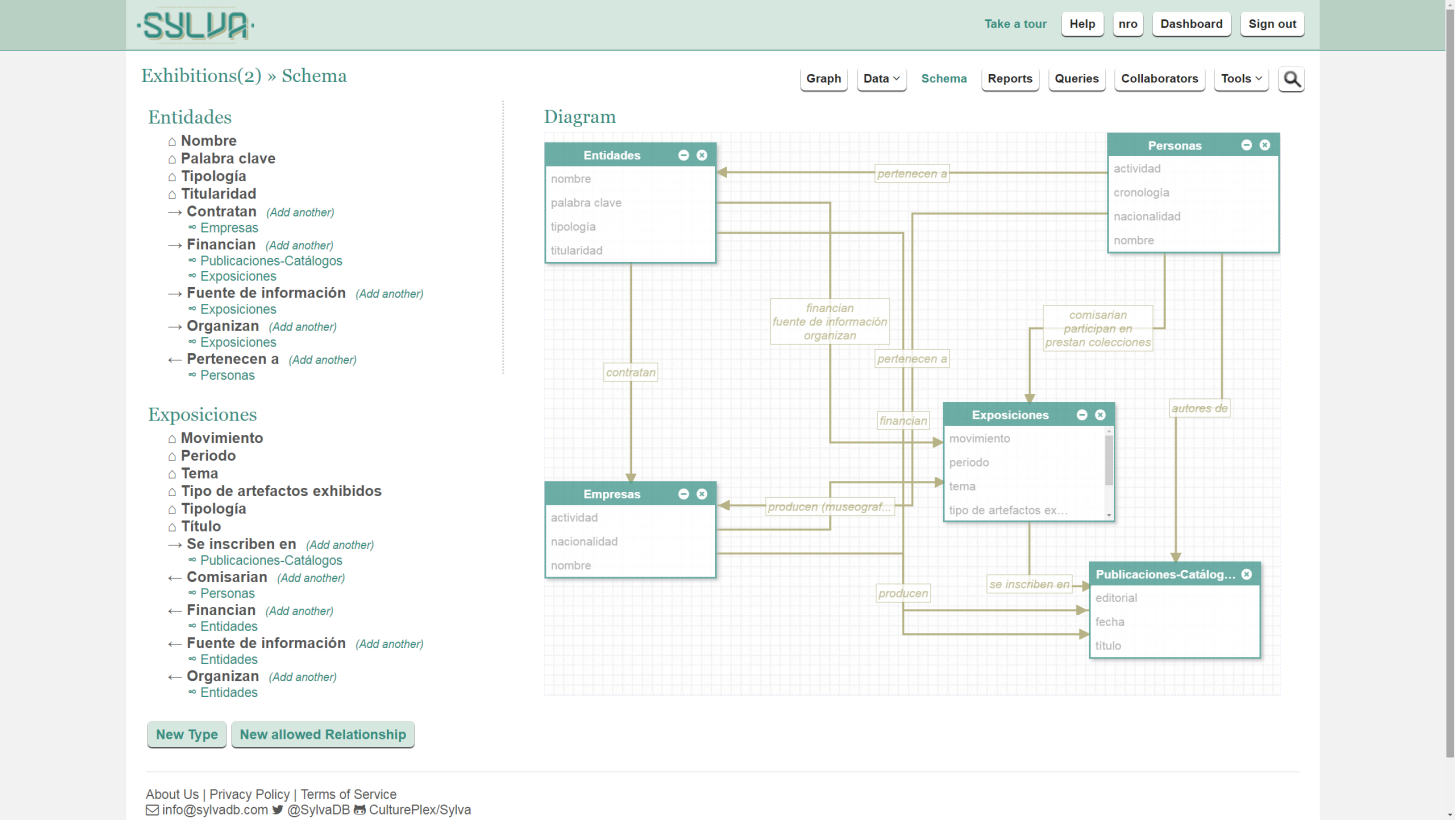 Figure 2. Ontology of the “temporary art exhibition” domain in the SylvaDB interface

b) KDD (Knowledge Discovery in Databases) techniques, specially the co-word analysis strategy (He, 1999) [3], which are mainly oriented to the discovery of implicit knowledge in large repositories of structured data (Echevarría and González, 2009; Rodríguez Ortega et al, 2015).

Through these analyses we are getting a set of graphs that is allowing us to discover correlations between certain artists, centers, curators, financing institutions, themes and geo-spatial contexts. Note that the configuration of clusters of this nature, understood as network of strong relationships established between their nodes, can be read as power structures operant in a certain domain.

The conceptual and methodological differences existing between the co-word analysis strategy, which extracts the actors and their relationships directly from the data processing, and the network analysis strategy, based on a scheme previously established (ontology) that derives from our direct observation of the real world, it is allowing us to make interesting comparisons between how we understand the domain “art exhibitions" and what (implicit) structure emerges naturally from the processing of the keywords associated to this field.

Along with this knowledge -key to develop new critical narratives-, the discovery of certain patterns is also providing a prospective knowledge about possible and future trends in the field of temporary art exhibitions, which can be strategically used by exhibition centers or other stakeholders (tourism companies, entertainment industries, etc.) in their decision-making processes.

In addition, these methods of analysis are allowing us to investigate the peripheries that are also associated to the field of art exhibitions as a result of the prevalence of some institutions which centralize the flow of public among other things due to their media impact capacity. To facilitate the social visibility of those initiatives usually unknown we are proceeding to integrate the Exhibitium data in the Geowave system, a georeferenced platform to manage cultural content.

[2] Since the nature of this text does not allow us to provide a detailed explanation of such system, we suggest to see the site http://admin.expofinder.es/test/xmlrpc/ [Viewed: 28/10/2015].

[3] The co-word strategy is based on a basic principle: all actors in a network, regardless of their nature, can be represented by words or descriptors (actually, this is how the data are represented mostly in bibliographic repositories). Natural relations of co-occurrence of words in data repositories form a network that can be analyzed and mapped. The words that co-occur more frequently form clusters that can be analyzed as networks with strong links; at the same time, it is possible to analyze how these networks change throughout different periods of times or geo-spatial contexts. For example, we can analyze how the network generated by an artist (i.e., Picasso) changes according to the geographical provenance of the data (exhibitions in Spain, Europe, USA, Latin America, etc.).