Given the rise in recent years of GeoHumanities projects, this paper considers how historical data are translated and represented geographically within online mapping projects, giving insights into how these representations influence acquired meaning. GeoHumanities predominantly use geographical tools to create, present and explore different types of historical evidence and resources, for example original paper maps transformed into digital representations or geocoding of place names within texts. Factors impacting the resulting representation of historical evidence in geographical form include: choice of the underlying geographic data models, form and style of the original (historical) objects, as well as the selection, transformation and encoding practices. In this study we observe which data models are used and their context, to understand how these choices may influence acquired meaning and cognitive understanding.

The GeoHumanities special interest group of the Alliance for Digital Humanities Organisations has a catalog of 312 geohumanities based projects (data from July 2014). From this list a sample of 30 projects were selected (sample selected based on language, availability and production since 2010) . In these projects, the cartographic representation of historical evidence was evaluated according to a set of 70 different criteria grouped into 4 categories: (1) data structures used to model data; (2) forms of representation (typology, symbolism, use of transparency and uncertainty); (3) data interaction possibilities offered to users and (4) spatial data analysis possibilities offered to users.

The following research questions were investigated:

In this paper we consider the first research question.

In the sample we observed a mix of both vector and raster data models. Of the 30 projects, 40% (n=12) used raster data models to integrate georeferenced versions of historical paper maps, with 4 types of use scenarios (see figure 1). Firstly, either paper map sheets belonging to a map series were stitched together or individual maps were used as a basemap layer enabling viewing of historical context or comparison of raster map to digitally encoded vector data.  The digital versions of the paper map were presented as an optional data layer in the interface that, in the main, could be switched on or off by the user.   For 26 out of 30, the historical map was overlaid on top of a contemporary raster base map which displayed either a street map or an aerial view. In only 2 very early period maps, the Agas Map of Early Modern London and The Gough Map of Great Britain, was it not possible to view a contemporary reference basemap.

The second and third types of historical paper map representations in raster format were observed in crowdsourcing methodologies. In these projects users are asked to interact with the map to create new digital data. One category of projects asked members of the public to undertake the transformation from a digital scan of the paper map to a true digital raster using the processes known as georeferencing. The other made use of georeferenced historical maps and asked users to vectorise historical data. Users were asked to encode labels or draw and confirm shapes of buildings. In this type of task the users are effectively tracing the historical map to create a vector representation. The final use observed focused on the search of historical data through the map interface to find metadata records and locate historical maps. The coordinate extents of the original paper maps were used to draw a minimum bounding rectangle within the web-map interface to highlight the represented areas. Users could then search for places and discover which old maps are available digitally at different archives.

After such extensive treatment, to digitally transform the paper map into a web map, it becomes relevant to consider notions of materiality between the source and the transformed map. The “materiality” of the raster map is influenced by the transposition from paper to digital, with the associated loss of integrity. Take the action of cropping the map, observed in two thirds of all the rasters. The deletion of contextual map elements implies a certain loss of meaning from the source. Lost information commonly include: title, coordinate system, data of production, map producer, original legend, handwritten notes, archive stamps and other information. Thus the cropping process ensures that only purely functional cartographic data are retained, whilst the social document context is neglected.

A new type of digital materiality is derived from the transformation of the paper map to the digital into a “ slippy map”, where the historical  raster map is cut up into a sets of map tiles that provide small images which are seamlessly joined together (in the same way Google Maps API and others provide users access to contemporary basemaps). By cropping the historical map to show only the cartographic map many map sheets from the same original paper map series can be stitched together to provide a detailed view across a wider geographical extent without having overlapping boundaries or edge effects of the different map sheets that would result otherwise. Of course such a large map with street level detail would not have been possible to draw using traditional paper maps and is facilitated only by advances in technology and web-mapping interfaces. Once the georeferenced maps are tiled, the slippy map enables users to zoom and pan effortlessly. There are certain advantages: (1) users can explore an entire city, region or continent as one seamless entity; (2) viewing of the map is instantaneous as tiling methods do not require lengthy loading times (which can be the case if providing high resolution georeferenced raster maps that are not tiled); (3) users are provided with new types of interactions for engaging with the map and importantly (4) users are provided with digital transformation to enable new ways of consuming “original” historic material.

Vector data, especially point objects, were by far the most common representation of historical data in Geohumanities projects. Nearly all of the samples, almost ninety percent of the projects (n=26) used points for their digital conceptualisations of historical phenomena, ideas or events, see figure 2. Moreover, it was particularly common to simultaneously use both raster and point data structures within the interface. Whereby, the historical map in raster form was adopted as the basemap, ie a reference map with the point data provided users with representations of more specific data. Such a mix was observed in 22 projects. A small number of projects also made use of the line (26%) and area (33%) geometry objects that are available as part of the vector data format. No projects used text as a way of representing information (except to label objects label objects). 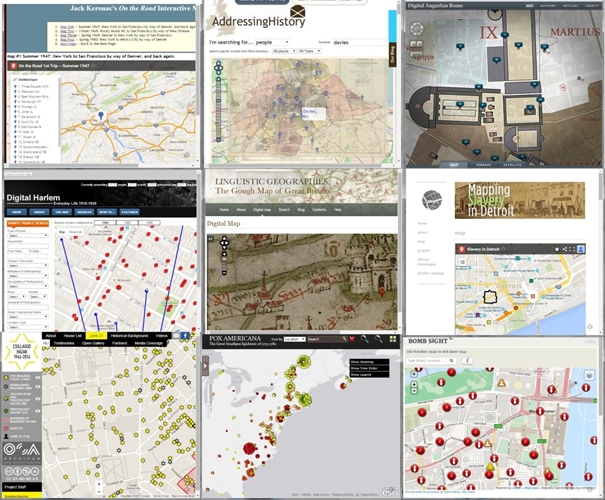 The point data object is a ubiquitous form of representation. It is a pervasive feature of geohumanities web-mapping projects and was observed in nearly all the sample projects (almost 90%). The point is used to represent a digital conceptualisation of historical phenomena, ideas, places, events etc. Despite the ubiquitous use of this data model, it is not without issues.

Given that a point marks an exact location, it was often observed that points (miss)represented phenomena that ranged in scale from a building, city and region or wider, sometimes representing all in the same data layer. Such confusing representations were exacerbated by (1) choice of representation - the use of the map pin which implies certainty in location; (2) failure to represent uncertainty in data therefore implying absolute facts – that are actually ambiguous (3) low usage of icons as map symbols reducing the cognitive understanding of the map. The point encapsulates a sense of location accuracy, precision and factual detail that often represented fuzzy historical constructs at best. Thus, in much the same way as text is transposed into digital form (Kirschenbaum, 2001; Hayles, 2005; Drucker, 2011), the digital map transformations and resulting cartographic representations influence the meaning of the mapped data and how it is read, interpreted and understood. By failing to consider carefully the cartographic choices in how the digitised historic data are embodied, it is likely that the cognitive load placed on the user and the efforts required to extract meaning from the maps are significantly increased. It also will strongly influence how these digital translations are interpreted and understood by the user.

This evaluation is a starting point for discussions between humanities scholars and geo specialists, designers, information scientists and human computer interactions experts. It is obvious that digital transformations of historical data into digital geodata world provides many benefits, not least that associated with pattern recognition and presentation of data but it is not without its limitations. Initial results indicate that existing models and cartographic representations of georeferenced historical data need to be extended. It is plausible to suggest that the point data structure is inadequate for representing complex historical phenomena or broad geographical concepts but due to the lack of alternatives it is widely accepted as standard practice. We will reflect on the point as an appropriate mechanism for representing complex historical data? Explore the extent digital representations should stay true to original historic map evidence? And investigate how digital map translations influence understanding and aid/hinder interpretation?