With this contribution, I would like to discuss how multi-layered visualizations of epistolary networks can contribute to a better understanding of the circulation of illegal literature and confidential ideas between Catholic Tuscany and the Calvinist Dutch Republic. It questions how intellectual exchanges between these two regions maintained a balance between, on the one hand, the necessity to distribute (prohibited) books and to express controversial ideas and, on the other, social control and the need to avoid the objections of powerful political and religious institutions and individuals. This comparative analysis allows for a sharper focus on the differences and similarities on how intellectuals capitalized on opportunities in the social and religious structures to which they were connected. Indeed, they had to deal with the many tensions between the oppressive catholic environment of the court of Cosimo III and the Dutch Republic, already well known for its relative tolerance and freedom of printing (e.g. Touber, 2014).

These personal and societal conflicts forced scholars and booksellers to take strategic measures of secrecy and confidentiality, which in turn depended on what Mauelshagen (2003) also called “networks of trust”. If we pose the question how epistolary networks evolved, understanding changing relationships between people, one might provide insights into aspects of confidentiality. For instance, as relationships grew friendlier, correspondence grew in confidence and trust, while on the other hand one did not correspond with adversaries (Heuvel, et al. 2014). Other examples include studies of Lux and Cook (1998), who claimed that the success of the Dutch Republic depended on what Granovetter (1973) also called “weak ties” instead of central hubs. This implies the importance of intermediaries between communities for the faster distribution of ideas: if you have a particularly close friend from another community, you are more likely to introduce him to your other close friends whom you know that will trust you (Barabási, 2009: 55).

If we wish to verify these statements and to understand how intellectuals were able to overcome these confessional and social barriers, the analysis of multi-layered networks of correspondences provides a very interesting addition to archival research. Or in other words, the combination of methods for network analysis for distant reading of large sets of letters with close reading devoted to detect the role of secrecy and confidentiality in epistolary exchanges strengthens historical research. This means that qualitative analysis will uncover how social relations are represented and constructed, sometimes reinforced and sometimes transformed, which is enriched by traditional hermeneutic methods to focus on specific religious and personal features that have influenced those dynamics.

It is important to consider that full data integration, in particular when dealing with early modern letters, is impossible for reasons of incompleteness, complexity and uncertainty in data. Therefore the focus should not be on analytical and statistical methods of network representations alone, but on approaches that allows us to handle, inquire and interpret these complex historical data. We do not need just networks as static representations, but also networks as interactive interfaces (Heuvel, et al. 2016). To this end, the software tool Nodegoat is used to bring together, explore and contextualise these epistolary exchanges. Nodegoat, differently from network visual-analytical tools such as Gephi, is built around data entry, management and curation processes ( http://mnn.nodegoat.net/viewer). It enables us to explore and to combine historical networks in various configurations, involving a diverse set of actors. This means that not only persons (scholars and booksellers) constitute relationships but also textual objects, like books with their dedicatees and introduction letters. For instance, the overlay of networks highlights those artefacts that played an important role in the establishment of contacts. If we look at their intersection with their function in the network, new opportunities may rise about how to link book dedications to strategies adopted by scholars. The importance of textual objects as participants in networks has also been stressed by Latour (2005). From the correspondence of the Florentine librarian Antonio Magliabechi, for example, it turned out that the Dutch microbiologist Antoni van Leeuwenhoek (1632–1723) chose to dedicate his work the Arcana Naturae Detecta to Magliabechi. By using this strategy, Leeuwenhoek was able to benefit from Magliabechi’s extensive network for the distribution of his work in Italy. Overlaying different networks sheds light on the role of the Arcana in the network of Magliabechi (fig. 1 and 2). For instance, the image illustrates those correspondences in which Magliabechi mentioned the publication of Leeuwenhoek, showing in this way the diffusion of his publication over time. 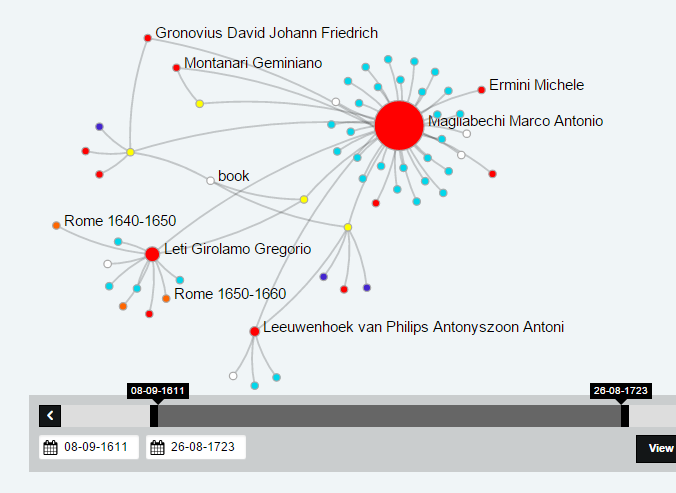 Fig. 1 A visualization of networks around the Arcana Naturae Detecta of Leeuwenhoek (the right yellow node) and Magliabechi. Magliabechi, at the centre of this visualisation, is surrounded by other dedicatees (represented in red), their accompanying books (yellow) and the letters in which the Arcana is mentioned (light blue). Hovering over the nodes and ties opens an overview with the different connections, and specifies the nature of the relationships (see fig. 2) 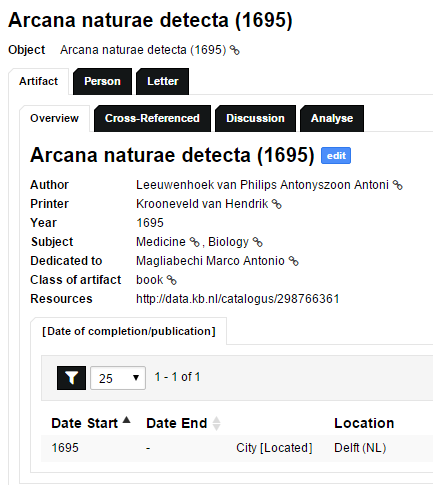 Fig. 2 Overview of the Arcana Naturae Detecta, linked to the Short Title Catologue of the National Library of the Netherlands (KB)

Moreover, the analysis of relationships between people can provide insight between direct and indirect transfer of confidentiality via intermediaries. In the Mapping Notes and Nodes in Networks project (Álvarez and Heuvel, 2014) it appeared that the overlay of more networks shed light on the evolution of co-citation networks and introduction networks. As correspondents entered networks of epistolary exchange, they did so not in some ideal egalitarian society, where anyone could join simply by writing a letter, but in a world regulated by social norms and rules of etiquette. In short, letters of introduction were often necessary to be admitted into an epistolary network. Following the evolution of introduction letters alongside a citation network and determine whether a shift takes place in the number of intermediates between correspondents (revealing shrinking degrees of separation), could reveal the importance of introductions in the establishment of epistolary networks.

Furthermore, Nodegoat is used to bring and contextualise epistolary networks by means of data integration from various data resources such as the Short Title Catalogue Netherlands (STCN) and archival research from archives in the Netherlands and in Italy. The STCN has been queried in order to disambiguate objects and to enhance the interoperability of my data. For example, information on books in epistolary networks can be linked directly to the STCN, which allows me to map the unstructured data in the letters (as titles are often mentioned incomplete) to structured data.