Diachronic changes of the Russian Presidential Addresses to the Federal Assembly: From the perspective of archetype key words

The purpose of this study is to investigate diachronic changes of the Russian Presidential Addresses to the Federal Assembly (RPAFA) given by Russian Presidents, Boris Nikolayevich Yeltsin, Vladimir Vladimirovich Putin and Dmitrii Anatolievich Medvedev. This study proposes political archetype key words (PAKW) and provides a fine-grained classification of presidential speeches.

Russian presidents have given a number of annual speeches. Among them, the RPAFA, which started in 1994, has drawn text-miners’ attention. In one recent study, Jashin (2010), argues the importance of “political archetype key words” (PAKW) in the RPAFA through one text from each president: Yeltsin in 1996, Putin in 2000 and Medvedev in 2008. While thought provoking, Jashin’s observation has two fatal issues: (i) his observation is based on raw frequencies of each lexical item, and (ii) the speech texts that he uses are arbitrarily limited. That is, he only uses three of the speeches, one from each president, without providing reasons for not using all the texts. Thus, the tendencies observed by Jashin cannot be straightforwardly generalized to tendencies of the presidents; Rather, they may be tendencies of the year. Though the notion of the PAKWs is useful, a further investigation of the PAKWs is needed.

In order to overcome the insufficiencies in Jashin’s study, the data set must be reexamined. The data used in this study includes the following:

The result of the correspondence analysis using a frequency matrix of the PAKWs in each RPAFA file is given in Figure 1 and Figure 2. 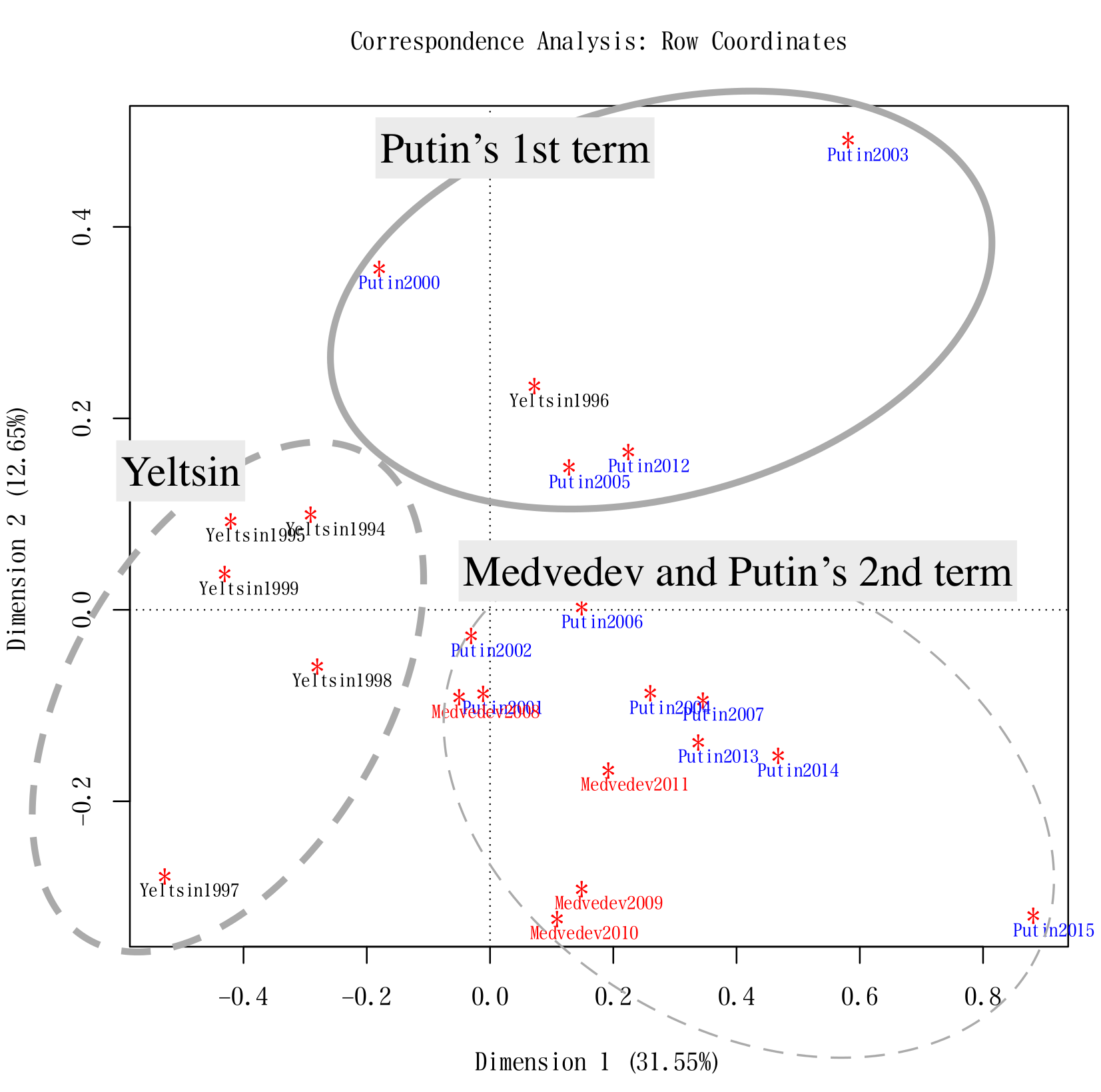 According to Figure 1, we can roughly classify the speeches into three large categories: Yeltsin on the leftmost circle in a bold dotted line (hereafter, Y dimension); Putin’s first term circled with a solid line (henceforth, P dimension); and Medvedev and Putin’s second term traced by a fine dotted circle (thence, MP dimension).

Figure 2 shows PAKWs that each text frequently uses. Words observed around the Y dimension are highly relevant to national reconstruction, such as власти ‘authority- gen’, государственной ‘state- gen-fem’, органов ‘organ- gen-pl’, деятельности ‘activity- gen’. Putin in the P dimension prefers to use words as like in Yeltsin, but Putin tends to use words related to Russia such as Россия ‘Russian- nom’, российской ‘Russian -gen-fem’ in his first term. In the MP dimension, the figure shows that the presidents frequently used words related to the life of citizen like жизни ‘life- gen’, люди ‘people- gen-pl’, экономика ‘economy- gen’, сфера ‘sphere- prep’ and правительство ‘government-subject case’. 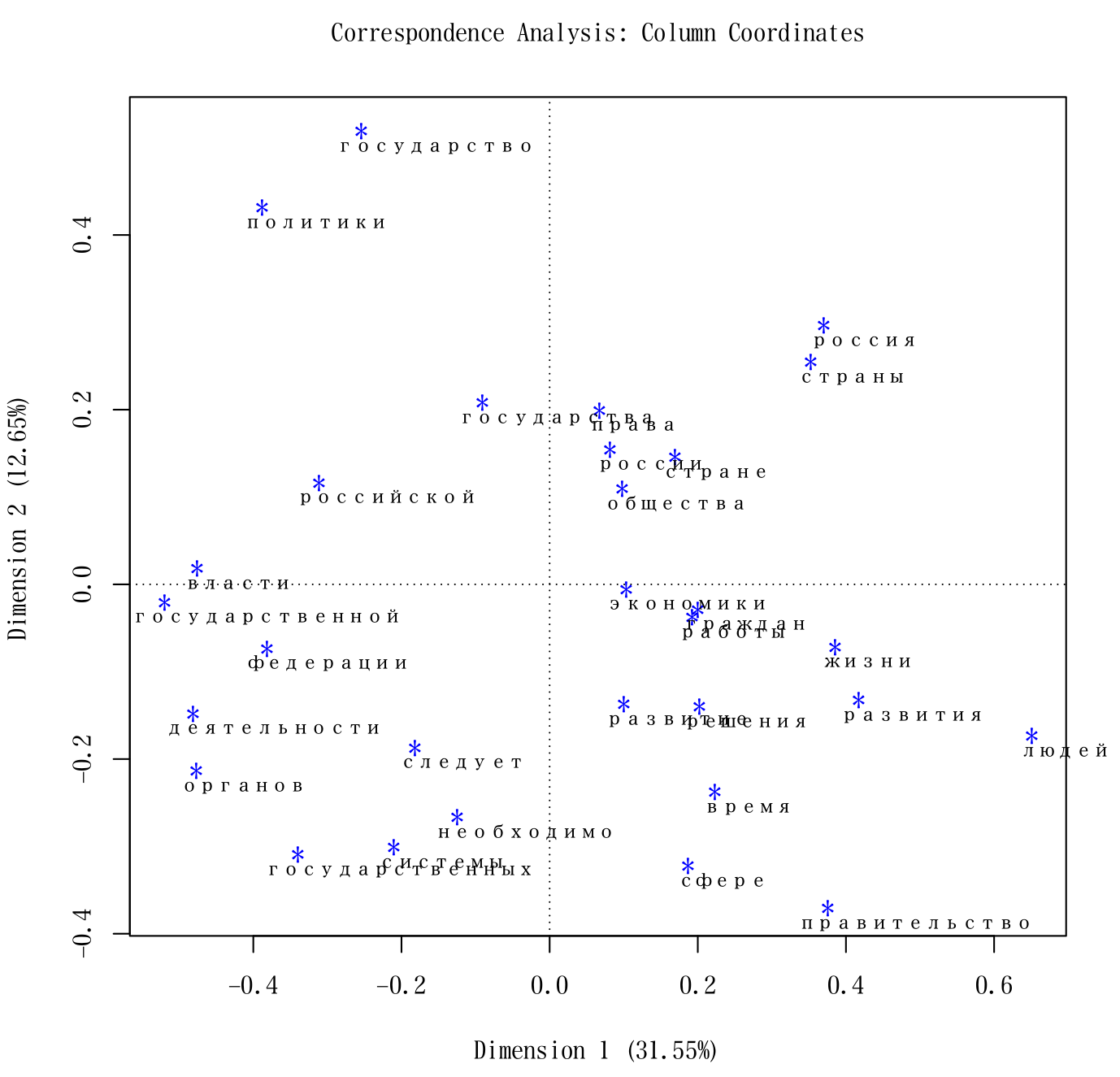 Figure 2 The distribution of PAKWs

The observation based on the distributions of the PAKWs suggests that the classification based on the correspondence analysis in Figure 1 is attributed to the historical backdrop. Let us consider Figure 2, which corresponds to the result of Figure 1. In the Y dimension, Yeltsin frequently uses words related to state. In other words, he expresses concern through words related to ‘state’. This is primarily because the Russian government was in confusion due to the collapse of the Soviet Union, and Yeltsin’s primary policy was to construct a democratic political system. A lexical overlap in the Y and P dimensions indicates that Putin inherited Yeltsin’s policy, but the use of Russia refers to a change of approach to reconstruct Russia from Yeltsin’s administration. The MP dimension includes the PAKWs related to non-authorized citizen or nation. This is attributed to development of the country. That is, after enhancement of the Russian political infrastructure supported by Yeltsin and Putin’s first term, the primary political attention has shifted to improvement of social-infrastructure in Medvedev and Putin’s second term.

To sum up the investigation from Figure 3 and Figure 4, the use of PAKWs in the RPAFA provides political attitudes of the presidents. That is, the 30 most frequent content words show background political issues of the time. This study concludes a possible implication in supporting the political discourse analysis theories.