Richard Wagner’s leitmotifs (Whittall, 2003), the compositional technique and its aesthetic implications as well as the individual motives, their musical characteristics, meanings, and transformations through the works, have been subjected to a wide variety of interpretations throughout different cultural and historical situations. The popular Wagner discourse in particular – in work introductions, guidebooks, programme notes, commentaries and motivic annotations in libretti and piano scores – focused on the extraction, description and presentation of leitmotifs in order to convey their interpretation of Wagner’s work. Thus, the phenomenon ‘leitmotif’ cannot only be defined as a compositional technique, but also as a reception practice (Grey, 1996; Rümenapp, 2002; Thorau, 2003). This study aims at a large-scale comparison of these reception practices that reaches across cultures and time periods and is able to not only describe general characteristics of sources, but to compare interpretations down to conceptions of individual motives. Semantic Web technologies (Berners-Lee et al., 2001; Bizer et al., 2011), with the enhanced capabilities of linking, searching and structuring of data they provide, may facilitate this undertaking. This paper describes an ontology that models the structure and content of leitmotif interpretations, which shall enable the semantic annotation of sources and the structured representation of the interpretations they contain. A particular focus lies thereby on the methodological considerations and design decisions that stand behind it.

Semantic Web Research and Musicology are two distinct domains, each with their own conventions, terminologies, and patterns of thought and discourse. Attempts to integrate them thus have to deal with the following questions: “How do [musicological] methods translate into methods of Semantic Web Research?” (Kummer, 2011) Can we conceive of a musicological ontology, which not only forms the basis to represent discourse in novel ways, but also works as an analytical device? How can we take advantage of the commonalities and accommodate the differences between methodologies and ways of thinking, such as different approaches to the presentation of knowledge and the construction of complexity, and the confrontation of different values of flexibility, ambiguity, and metaphoricity on the one hand and explicit definitions and taxonomies on the other? There are several key strategies by which the described ontology aims to achieve compliance with both domains: 1) a historical, critical and philosophical ‘awareness’ within the terminology and its specifications, as well as the connection to a shared vocabulary in the form of musicological encyclopaedias; 2) the incorporation of flexibility, ambiguity and nuance into the explicit model; 3) a direct correspondence between the ontology and both the document and “thought structure” of the interpretations it models.

Existing approaches that apply Semantic Web technologies to music or musicology are mostly concerned with organising and retrieving musical data. The Music Ontology aims at modelling the “music production workflow”, and focuses on managing “music-related data” of recorded and foremost popular music (Raimond, 2007). Since this domain specification also shapes the terminology and definitions it employs, its application in the scholarly context of music history can be problematic: it does not comply with the terminological standards and conventions of musicology, and does not provide sufficient concepts to describe the variety of data that contextualises music and that is vital for music-historical study. The “musicSpace” project (Bretherton et al., 2009) aimed at enhancing the possibilities of musicological research by “integrating access to many of musicology’s leading data sources”, gathering factual information from this data and metadata and making this information accessible and searchable via a single interface. While sharing common goals and objectives, the project at hand aims at going beyond factual information and at analysing the structure and content of a specific type of musicological discourse, modelling assignments people attribute to a musical work throughout the history of its interpretation. Related approaches can also be found in different disciplines, such as Cultural Heritage and Museology (Doerr, 2003): Traditional approaches in musicology tended to treat works as self-contained conceptual objects; therefore, the reception or interpretation history of a musical work can, to a certain extent, be seen in correspondence to the provenance of an object. Relevant are furthermore ontologies that aim at modelling narratives or, more general, the content or structure of sources in different contexts, such as the OntoMedia ontology (Jewell et al., 2005), Story Fountain (Mulholland et al., 2004), or Curate (Mulholland et al, 2012).

Analyses and interpretations of musical works, even though their content, analytical approach etc. might be completely different, on a basic level often rely on similar structures and constituent elements. These commonalities increase within the “specialised” analytic or interpretative discourse that is concerned with, for instance, a particular composer, a particular form, style or genre, which shares patterns and conventions of discourse and a specified vocabulary. This ontology, therefore, aims to model leitmotif interpretation as a special case of musicological discourse: its design is based on an analysis of representative source documents, and its structure and scope is informed by the structure and content of these interpretations and their presentation principles.

The ontology negotiates between several layers that model different dimensions. The first contains bibliographical metadata on the source documents, while the second concerns the source type and the corresponding internal document structure. The third level comprises the content structure, and is most significant for the comparisons of the different leitmotif interpretations.

Guidebooks, such as Hans von Wolzogen’s Thematischer Leitfaden (Wolzogen, 1876), are already highly structured documents: They follow the chronology of the work, and “narrate” the music by extracting leitmotifs and describing their appearances, interactions and transformations through the course of the work. This interpretational concept of a leitmotif is, however, not the same as the compositional concept: they are integrated, self-contained constructs, abstractions from the musical context that tie together a musical phenomenon and its interpretation. They are represented as a collection of several constituent elements, such as a notation example fixing the motive’s shape, and a descriptive name defining its semantic reference (see figure 1). Which constituent elements exactly form a leitmotif concept differs between sources, and is characteristic for the source type or the interpretation approach. However, whereas within one guide, leitmotif concepts are stable and easily identifiable, the comparison between a large number of sources undermines permanent constructions: the same name can be found applied to different musical phenomena, or the same musical shape can be assigned different names; and even seemingly small nuances can point to significant differences in interpretations and aesthetic attitudes: the names ‘Schicksalsmotiv’ (Wolzogen, 1876) and ‘Schicksalsfrage’ (Porges, 1882), for instance, imply a completely different relationship between the name and the musical phenomenon: while the former establishes a denoting connection, with the motive acting as a sign for its semantic reference, the second establishes a metaphoric connection between the musical structure and the name, as the rhetoric characteristics of the ‘Frage’ (‘question’) parallel the musical characteristics of the motive. The varied combinations of constituent elements in different sources further complicate a comparison: how can we compare leitmotif concepts that don’t share any features? The ontology applies several strategies in order to cope with these difficulties: 1) Rather than providing a fixed definition of an interpretational leitmotif concept and its structure, the notion of a leitmotif concept is defined through its relationship to its constituent elements. Thus, the ontology does not prescribe a particular structure in which the actual instances have to be fitted, but stays flexible and can accommodate varying interpretational approaches. 2) The ontology introduces three meta-constituents, that are assigned in the analytic process and that shall introduce a common basis for comparison: the reference to a point in the work, the reference to a semantic sphere, and the reference to a basic musical shape (see figure 1). 3) Within these three categories, there is a set of relationships that aims at expressing a differentiated spectrum of influence and independence, identity and contrast, similarity and difference. In addition to the described structural features, the ontology also introduces different levels of abstraction, so that leitmotif interpretation is modelled as a special case of musicological discourse in general and the ontology remains potentially extensible to accommodate other forms of music interpretation and discourse. 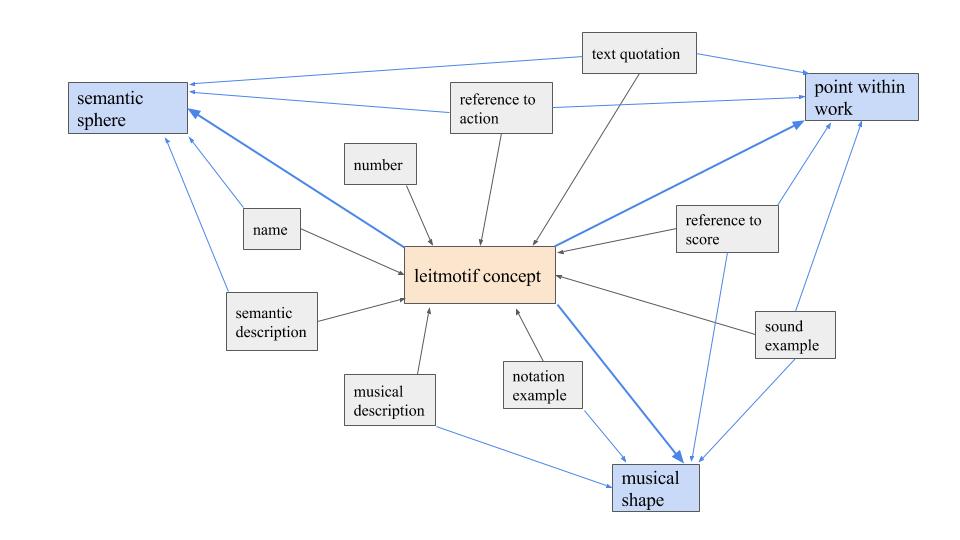 The described ontology forms the basis of a semantic annotation of the digitised sources, which shall facilitate the systematic comparison of a wide variety of leitmotif interpretations and enable to answer questions such as the following: Which musical shapes have been associated with a certain semantic sphere? How has a certain set of musical characteristics been classified in different interpretations and reception contexts? Being able to reorganise and query the reservoir of leitmotif concepts according to such questions can provide insights about larger contexts, patterns and constellations and form the starting point of more detailed investigations. Furthermore, beyond this particular analysis, it forms a first step towards a new structure of musicological discourse, as it allows to link elements of musical analyses, interpretations or reception documents together in novel ways.