Source criticism is a scholarly process fundamental to many disciplines of humanities, especially in historical studies. However, it is mainly designed for a traditional way of research, namely human scholars read a textual source without producing structured evidences for reuse. Our proposal is to extend the traditional methodology of source criticism to digital research infrastructure on which scholars records the reasoning process from evidences to facts, and share them with other scholars so that the detail of the reasoning process can be transparently reproduced. Our approach, digital criticism, aims at realizing this idea on digital criticism platform (DCP) toward evidence-based digital humanities with the support of Semantic Web technology. 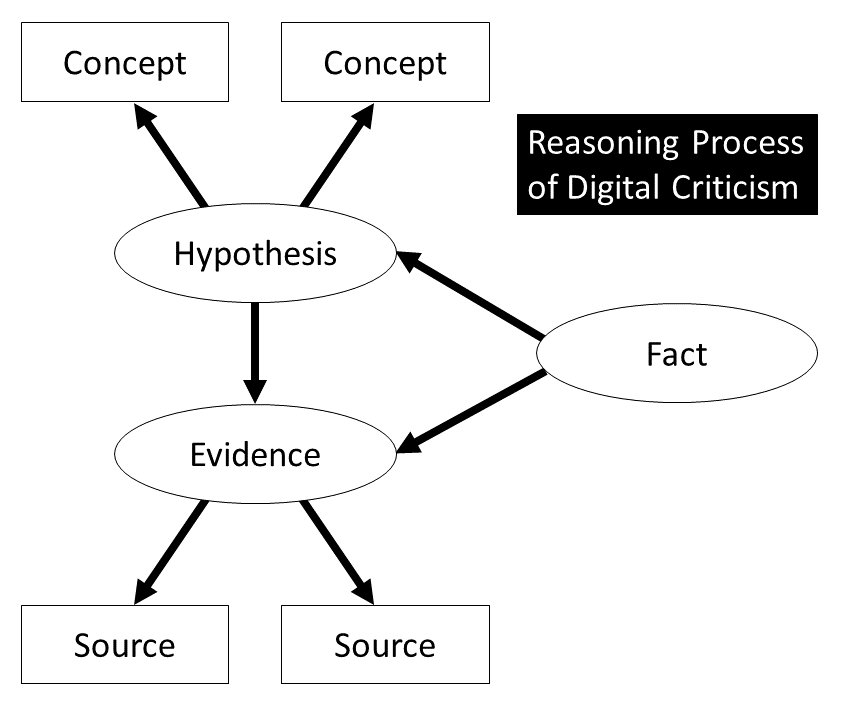 The main contribution of the paper is evidence network on which digital criticism is performed. The network consists of four concepts, namely evidence, hypothesis, fact, and reliability. Those concepts have our own definition to organize the historical reasoning process into an explicit model.

Figure 1 illustrates a schematic diagram of evidence network. A scholar can build up the network starting from each evidence and hypothesis. Another scholar who wants to reuse the knowledge can start from the fact, and track back to hypotheses and evidences to check the reliability of the reasoning process.

Evidence network is a directed graph with semantic annotation, and the graph structure is built using RDF (Resource Description Framework). Hence a search over a graph can be implemented using SPARQL, which is a query language for a RDF graph. To construct and study the evidence network, we develop Digital Criticism Platform (DCP) with three components, namely data repository, evidence tool, and inquiry tool as illustrated in Figure 2.

Mappining (Kitamoto 2012) is a web-based tool for matching maps (Figure 3). This tool employs an idea of “interactive georeferencing” in contrast to geometric correction. Interactive georeferencing uses a pin to match two maps at a single point, in a similar way of pinning cloths. When we put a pin, two maps scroll together, while when we release a pin, only one map scrolls. Using this interface, any point on a map can be matched with another map for overlay-based comparison. Interactive georeferencing is advantageous for reading sources because geometric distortion is not introduced. A pin is an evidence to claim that each point on a map represent the same location on earth. 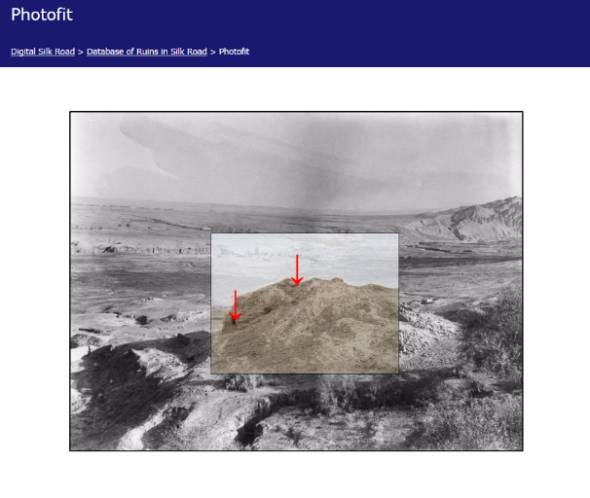 The purpose of digital criticism is to build an evidence network in which historical sources are linked through evidence nodes, and historical concepts are linked through hypothesis nodes to derive fact nodes supported by evidence and hypothesis nodes. We start by a bottom-up process of registering evidences and hypotheses which are still fragmented. We then switch to a top-down process of viewing a graph structure as a whole to discover unknown relationships. In the following, we use our past results on Silk Road ruins as case studies to check the validity of our approach. Due to the incompleteness of DCP, the following diagrams were manually drawn. 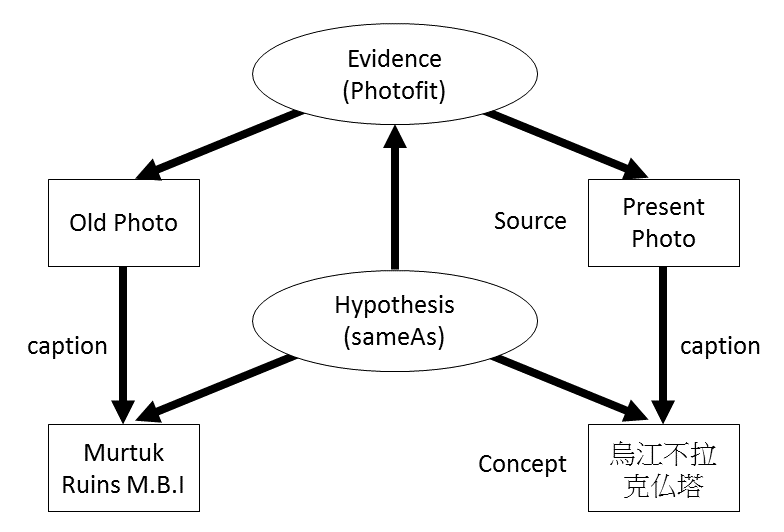 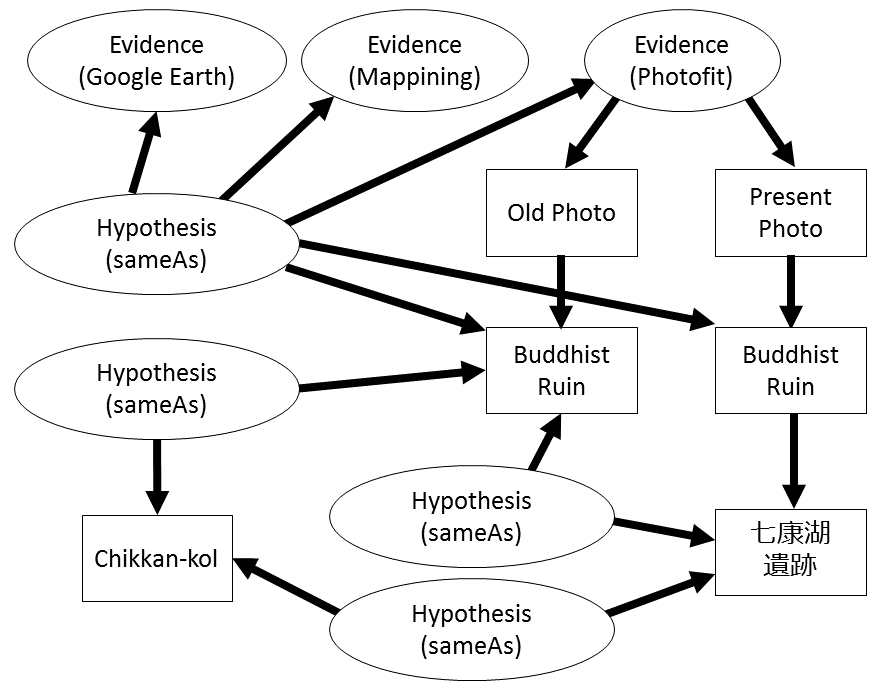 We proposed digital criticism platform (DCP) as a model of source criticism on a digital platform. Digital criticism tries to simulate the traditional method of source criticism and extend it to take advantage of digital research infrastructure. Digital Criticism is the upgraded version of our past proposal on “data criticism” (Kitamoto and Nishimura 2014), after shifting research focus on the type of sources to the way of digital scholarship. The methodology of criticism is also investigated in different approaches, such as algorithmic criticism (Ramsay 2011).

Knowledge representation of historical evidences has a large number of related literature. In particular, Pasin proposed the usage of factoid model for accumulating evidences for prosopography in the linked data world (Pasin and Bradley 2013), and linked data is also used for places such as Pelagios (Isaken et al. 2014). We also use the same concept of linking entities and uses sources as evidences, but digital criticism focuses more on accumulating structured evidences and hypothetical links. Another important work for the refinement of evidence network is knowledge representation for argumentation, such as CRMinf argumentation model, an extension of CIDOC-CRM (Paveprime Ltd and collaborators 2015). Finally, we are yet to make choices on metadata standards or vocabularies, which are open questions.

The long-term goal is to design a digital publishing platform for evidence citation. Historical facts can be tracked to evidences to clarify the reliability of evidences that support historical facts. This leads to increased transparency of research, and to realize better data management planning.

This work is supported by JSPS KAKENHI Grant Number 26540178. Software codes for DCP was developed by Mr. Tomohiro Ikezaki.